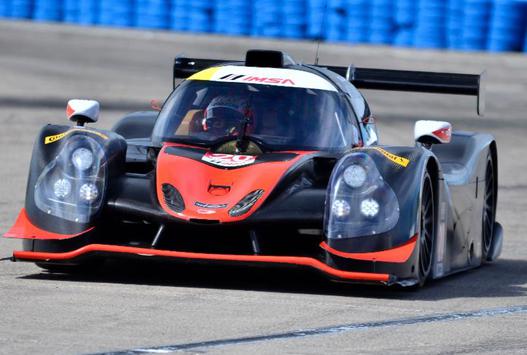 Following a long winter of testing and preparation to enter the new IMSA Prototype Challenge Presented by Mazda series, Alain Nadal’s ANSA Motorsports team came to Sebring International Raceway with great expectations, but did not really believe that they could do so well and achieve such a feat for a first-time-out with the Ligier JSP3 race car.

Dicken tested his new ANSA Motorsports Ligier JSP3 ride for the first time a week prior, during the two-day Sebring IMSA open-test. Jamin, who was called the Monday before the event to compete in rounds 1 and 2, had never tested an LM P3 prior to the first practice session in Sebring.

Wednesday’s practice session was good for ANSA Motorsports, whose drivers ran well in anticipation of an action-packed day 2, which included a practice session, qualifying and the first 45-minute race of the 2017 season.

Dicken came to Sebring with a desire to do well and to score precious points for the 2017 driver championship. The driver from Louisville, Kentucky, qualified 11th in the LM P3 class. His teammate, Jamin, scored the first pole position of the season.

Thursday afternoon was time to race in the first-ever IMSA LM P3 event contested in North America. ANSA Motorsports, Jamin and LM P3 car maker Ligier started the season with a bang! After 45 minutes of racing, they have gone down in the history books as the first winner of an IMSA-sanctioned LM P3 race, with the Mazda Road to Indy French star dominating the opening round of the new-look Prototype Challenge Presented by Mazda series at Sebring International Raceway.

Jamin took his No. 20 ANSA Motorsports Ligier JS P3 to a 11.789-second victory over the No. 12 Performance Tech entry of Andres Gutierrez, in a caution-free race. Jamin led from flag-to-flag in commanding fashion, helping lead a 1-2-3 sweep of the overall podium for Onroak Automotive-built prototypes.

Dicken had a good first race and, despite several tough on-track battles, managed to score his first top-ten finish of the season.

Jamin started on the pole in race 2 and doubled up, winning Friday’s second race of the weekend in the No. 20 ANSA Motorsports Ligier JS P3. Jamin led start-to-finish in the 45-minute event, completing 18 laps on the historic 3.74 circuit. The race ended under caution, due to a multi-car incident in the hairpin shortly after a restart with eight minutes remaining.

Dicken had another positive run in race 2 and scored a second ninth place finish in a row and was able to score good points towards the driver championship, as he wanted.

This outstanding historic race week for the Miami Gardens, Florida, ANSA Motorsports team and its drivers — who scored two pole positions, two wins, two fastest race laps and two ninth-place finishes — was made possible by the great driving by both ANSA racers and by the hard work provided by the crew that prepared two reliable, competitive Ligier JS P3 machines.

The Sebring IMSA Prototype Challenge Presented by Mazda event will be televised on a delayed basis on Fox Sports’ FS2 (date to be announced soon).

The next IMSA Prototype Challenge Presented by Mazda event is scheduled for April 21-23 at Barber Motorsports Park, in Birmingham, Alabama.