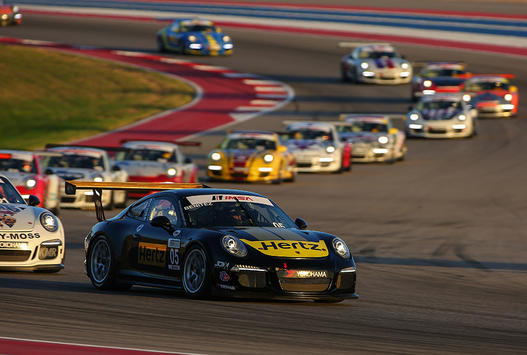 Rounds 5 and 6 of the Porsche GT3 Cup Challenge USA by Yokohama will take place May 5-6 during the IMSA WeatherTech SportsCar Championship event at Circuit of The Americas (COTA) in Austin, Texas. The addition of the COTA doubleheader officially completes the 2017 schedule for the IMSA-sanctioned Single-Make Series.

This will be the fifth consecutive season in which the Porsche GT3 Cup Challenge USA by Yokohama will compete on the state-of-the-art, 20-turn, 3.4-mile circuit in the Texas Hill Country, which also plays host annually to FIA Formula 1 World Championship and World Endurance Championship events.

But this event will mark the first time the series has competed at COTA in the spring, moving from its previous fall date.

The 2017 Porsche GT3 Cup Challenge USA by Yokohama will feature 16 races at some of the most challenging and exciting circuits in North America. The 2017 season got underway last week at Sebring International Raceway in Sebring, Florida, as part of the prestigious Mobil 1 Twelve Hours of Sebring Fueled by Fresh From Florida race week.

Two 45-minute rounds are contested at each of eight events to comprise the 16-round schedule in 2017. Twelve rounds also will take place during WeatherTech Championship events, putting drivers and teams into the brightest sports car racing spotlight in North America.

The Porsche GT3 Cup Challenge USA by Yokohama is one of the largest of Porsche’s 20 single-make Cup Challenge series in the world.

The series produces intense, exciting competition for semi-professional and aspiring professional drivers in the world’s most produced and iconic race car, the Porsche 911 GT3 Cup. The championship is the perfect platform for drivers to ascend to the highest levels of GT competition, such as the WeatherTech Championship, or as a destination for accomplished drivers whose participation in the series fulfills a lifelong dream.

Racing in the Porsche GT3 Cup Challenge USA by Yokohama is divided into two classes – Platinum Cup, featuring the new-for-2017 Porsche 911 GT3 Cup car, and Gold Cup, which is comprised of the previous iteration of the race car. A Masters Championship also is conducted in the Platinum class. Each class is recognized with its own podium at the end of every race and individual champions at the end of every season.