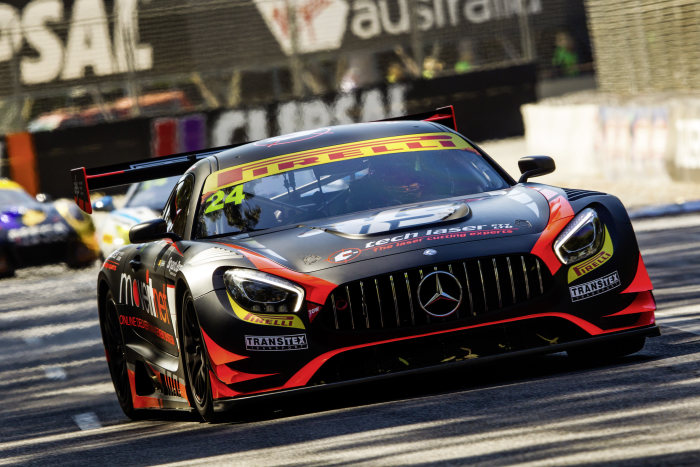 On the top step down under: the Mercedes-AMG GT3 scores its first overall win of the still fresh 2017 motorsport season. During the season opener of the Australian GT Championship, Customer Racing Team Eggleston Motorsport had a near-perfect weekend with its driver Tony Bates: first place, third place and another first place was the outcome after the three 40 minutes’ sprint races at the Adelaide street circuit in Australia. In the USA, on the other hand, the Mercedes-AMG GT3 will be making its Pirelli World Challenge debut next weekend (10-12 March): three cars from Affalterbach will be on the grid for the season opener at St. Petersburg, Florida.

Affalterbach – Once again, Australia proved to be a good venue for Mercedes-AMG Motorsport: during the season opener of the Australian GT Championship at the Adelaide street circuit, Eggleston Motorsport managed to score the first overall race win of a Mercedes-AMG GT3 in 2017. During the weekend, the team then added another race win and a third place. The success was also the 20th overall win with a Mercedes-AMG GT3 in the still brief history of the race car. In 2016 already, the Mercedes-AMG GT3, newly-introduced at the time, scored its first-ever win, also in the Australian GT series, with Customer Racing Team Scott Taylor Motorsport. In 2017, the success story continues with the season-opening race wins by Eggleston Motorsport. Driving the car with starting number 24, Tony Bates dominated proceedings. His performance at the Adelaide street circuit becomes all the more impressive considering that team and driver only reached an agreement to join forces for the upcoming season a few days prior to the event. Thus, Bates had little time to prepare. For the Australian, however, one free practice session and the two qualifying heats were enough to put in a faultless performance with his Mercedes-AMG GT3. Other elements were a perfect pit stop strategy that saw Bates move up from ninth on the grid to first place in the first race, also laying the foundation for his other achievements during the weekend.

Tony Bates, Eggleston Motorsport, Mercedes-AMG GT3 #24: “I can hardly find words to describe this weekend and now, I really will enjoy the party. Having such a perfect race weekend really is a rare occasion. After qualifying, I knew that we were in with a chance of scoring a good result, but with such strong competitors, I also knew that I had to put in a perfect performance. Throughout the event, Eggleston Motorsport has provided me with a sensational car that is the Mercedes-AMG GT3 and our strategy worked perfectly.”

Mercedes-AMG Motorsport already having made a successful debut in North America with third place in the IMSA WeatherTech SportsCar Championship season opener, the Daytona 24 Hours, the 2017 season now also gets underway in the Pirelli World Challenge from 10-12 March. Three Mercedes-AMG GT3 will be making their debut in the sprint race series at the Grand Prix of St. Petersburg, Florida, where two races of 50 minutes each are scheduled. In the field of 43 cars, Ryan Dalziel will be racing for championship points with Customer Racing Team CRP Racing in the car with starting number 2. Tim Pappas will be driving the #54 Black Swan Racing Mercedes-AMG GT3 and Pablo Perez Companc will be racing with starting number 69 for Champ1 Motorsports in the GTA class.

Ryan Dalziel, CRP Racing, Mercedes-AMG GT3 #2: “ It is my goal to be a contender for the GT championship title. The GT class is very strong and competition is really close. That is also reflected by the fact that, in the past two years, the battle for the championship was only decided in the final race. The Mercedes-AMG GT3 is a very good car and is definitely competitive. The CRP Racing Team is doing an outstanding job and we already had some good tests at Sebring.