JDC-Miller Motorsports is Up to the Task 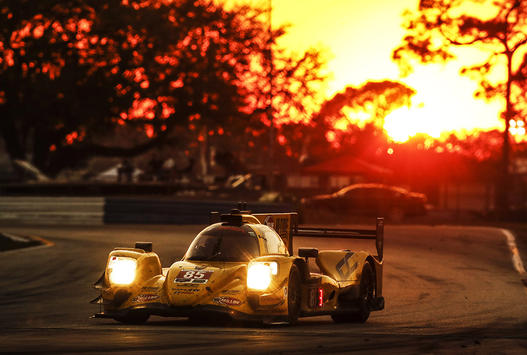 Entering the 2017 WeatherTech Championship season in a brand new ORECA LM P2 prototype, JDC-Miller Motorsports wasn’t quite sure what to expect.

The privateer team had just stepped up to the Prototype class after its final season of running in the Prototype Challenge (PC) category, a step that placed them in direct competition with several factory-supported programs. After a rough start to the year at the Rolex 24 At Daytona, however, JDC-Miller Motorsports has proven to be up to the challenge, finishing fourth overall in the Mobil 1 Twelve Hours of Sebring Fueled by Fresh From Florida after running in podium contention for much of the race.

“Yes, Sebring was good for us, and obviously you always want to do better, but finishing P4 behind the three Cadillacs is a great result for us,” said JDC-Miller Motorsports CEO and Managing Partner John Church. “It was very encouraging that we had the pace…running up front helps you stay out of trouble, especially at the long races.”

JDC-Miller Motorsports was pleased with the results from testing at Sebring in February, and carried learnings on to race week, where the team set the fastest lap time during the first official practice session.

“Always a good feeling,” said Church. “The team has done a superb job getting to know the new car, and having finished the two longest races is a true testament to their dedication.”

Adapting to changing conditions is not new for JDC-Miller Motorsports, as the team currently fields cars in several IMSA-sanctioned series. Having quality hardware to work with certainly helps, though, and Church is proud to field the No. 85 ORECA, affectionately nicknamed the “Banana Boat” by fans due to the car’s bright yellow coloring and Hi-Tide Boat Lifts sponsorship.

“We are very happy with the ORECA Gibson package as it has shown to be fast at Daytona as well as at Sebring,” he said. “I think it also is good for the series that a non-manufacturer backed team like ours running a Pro-Am line up can be competitive. Chris (Miller) and Misha (Goikhberg) did an unbelievable job and Stephen (Simpson) is for sure one of the most underestimated drivers out there.”

Simpson, who will drive the full season with Goikhberg, a past champion of the IMSA Prototype Challenge Presented by Mazda series, gives all credit to the team for its preparation.

“We knew moving into the Prototype class we were going to be up against some big manufacturers, teams and drivers,” he said. “But we wouldn’t have made this move if we didn’t think we could be successful in the top tier of sports car racing. Competing in the Prototype class is something I have been relishing. I want to be racing against the best teams and drivers out there and show that I and JDC-Miller Motorsports is a force to be reckoned with.”

The team now heads to Long Beach, where the team dominated in 2016, leading the PC class from start to finish en route to victory.

“It’s going to be interesting going to Long Beach,” said Church. “This year we come in a new class with a new car. Everybody is in the same boat, still getting a feel for things. It would be great to leave with a podium finish, a great way to reward the team and ORECA for all their hard work.”