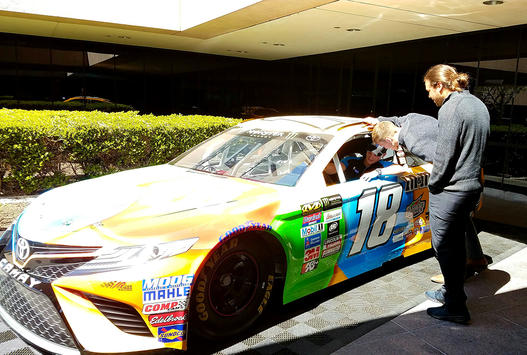 On Thursday, March 23, 3GT Racing drivers visited with Lexus and Toyota team members as part of the manufacturers’ annual Motorsports Day at its Torrance, California headquarters.

Sage Karam and Scott Pruett, drivers of the No. 14 Lexus RC F GT3, and Robert Alon and Jack Hawksworth, who pilot the No. 15 Lexus sister entry for 3GT, signed autographs and posed for photos with team members as part of the day’s activities, which also included Toyota’s drivers from NASCAR, NHRA and off-road racing, among other disciplines.

“We’re just down here at Lexus and Toyota for the annual Motorsports Day,” said Hawksworth, who drives the Lexus in IMSA’s GTD class. “It’s my first time here, so just meeting all the associates, signing a few pictures and catching up with the NASCAR team and all the other various motorsports that Toyota and Lexus are involved in. I get to check out the facility for the first time as well, so enjoying being here, it’s a great place.”

The visit was the first appearance for Hawksworth and Alon, a native of nearby Santa Monica, California, at the annual event after they were announced by 3GT to drive the Lexus in November 2016. Karam and Pruett previously visited the Torrance headquarters for the 2016 event, which also includes Toyota Racing Development, U.S.A. (TRD) team members and family of Toyota, Lexus and TRD associates.

“It’s a really cool event and we do this every year,” said Karam. “This is my second time doing it and it seems to always have the same amount of hype. We’re signing some autographs for all the employees that work here, going over some future stuff for Lexus and Toyota and just talking about what’s going to be coming up.”

Torrance is located just about 15 miles from Long Beach, California, where the IMSA WeatherTech SportsCar Championship will race next at the BUBBA Burger Sports Car Grand Prix at Long Beach, making the event a home race for Lexus.

“[Long Beach is] one of my favorite circuits and the first time GTD has been there and the first time I’ll have been there with a GT car,” said Hawksworth, who competed in three IndyCar races at Long Beach with a best finish of 14th in 2015. “We think we have a competitive Lexus RC F GT3 and we’re back to two drivers per car for this race – a shorter race, a sprint race – so just looking forward to being able to attack. It’s a great circuit with a great atmosphere. It’s our home race, so looking to go out there and get a good result.”

3GT Racing and the IMSA WeatherTech SportsCar Championship race on the 1.968-mile Long Beach Street Circuit on Saturday, April 8 at 1:05 p.m. PT. The race will be broadcast live on FOX beginning at 4 p.m. ET, 1 p.m. PT.