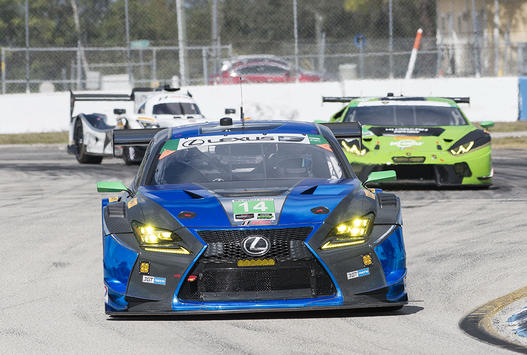 The 65th Mobil 1 Twelve Hours of Sebring Fueled by Fresh From Florida on Saturday, March 18 will feature a strong, 46-car entry list for the second round of the 2017 IMSA WeatherTech SportsCar Championship, as well as the Tequila Patrón North American Endurance Cup.

The race will be streamed live in its entirety in the United States on the FOX Sports GO app with FS1 authentication beginning at 10:30 a.m. ET. Live FS1 television coverage begins at 12:30 p.m. ET and continues for 9 1/2 consecutive hours, through the checkered flag and post-race interviews.

The WeatherTech Championship field includes 11 Prototype (P) class entries, a 10-car GT Le Mans (GTLM) field, 21 GT Daytona (GTD) entries and four Prototype Challenge (PC) cars. All four cars that won their respective classes in the season-opening Rolex 24 At Daytona on Jan. 28-29 are returning in hopes of repeating what both the Tequila Patrón ESM and Corvette Racing teams accomplished last year – a sweep of the “36 Hours of Florida” in the Prototype and GTLM classes.

The Rolex 24 overall-winning No. 10 Konica Minolta Cadillac DPi-V.R returns with its pair of full-season drivers in brothers Ricky and Jordan Taylor. However, they will welcome a new endurance race teammate in 23-year-old Briton Alex Lynn, making  his WeatherTech Championship debut and filling a slot vacated by longtime No. 10 driver Max Angelelli, who retired following the Rolex 24 victory but still remains with the team as a co-owner. Four-time Monster Energy NASCAR Cup Series champion Jeff Gordon also was part of the team’s Rolex 24-winning lineup, but now is focused on his commentary role for FOX Sports’ NASCAR coverage.

“I am delighted to be making my IMSA debut with the Konica Minolta Cadillac DPi-V.R team – the racing team and carmaker who both have such an incredible heritage and passionate desire to win,” said Lynn. “I would sincerely like to thank (team owners) Wayne (Taylor) and Max for trusting me to join Ricky and Jordan in this incredible race car. I look forward to learning a lot from the entire team and playing my part in building on the fantastic recent result at Daytona.”

The No. 10 entry is one of three Cadillac Daytona Prototype international (DPi) cars in a Prototype field that also includes a pair of Mazda DPi machines and two Nissan DPis from the Tequila Patrón ESM team that won Sebring last year. The Prototype field is further strengthened by four LM P2 prototypes: two ORECAs, one Ligier and one Multimatic/Riley.

In the GTLM class, the No. 66 Ford Chip Ganassi Racing Ford GT trio of Joey Hand, Dirk Mueller and Sebastien Bourdais will be looking to make history as the first complete set of co-drivers to win the 24 Hours of Le Mans, Rolex 24 At Daytona and Mobil 1 Twelve Hours of Sebring within a one-year period. They claimed the GTE Pro class victory last June prior to winning GTLM in January at Daytona.

Nielsen and Balzan return in the No. 63 Ferrari with new endurance co-driver Matteo Cressoni. Segal, meanwhile, will look to defend his 2016 Sebring victory aboard the new No. 86 Michael Shank Racing with Curb-Agajanian Acura NSX GT3 alongside co-drivers Ozz Negri and Tom Dyer.

The PC field will be led by Rolex 24 winners James French, 17-year-old Mexican driver Patricio “Pato” O’Ward, and Orlando, Florida’s Kyle Masson, who also will be competing in the season-opening rounds of the IMSA Prototype Challenge Presented by Mazda next week at Sebring International Raceway.

Practice for the WeatherTech Championship begins Thursday, March 16, with qualifying set to begin at 1 p.m. ET on Friday, March 17. The 65th Mobil 1 Twelve Hours of Sebring Fueled by Fresh From Florida takes the green flag at 10:40 a.m. ET on Saturday, March 18.

Tickets for the Mobil 1 Twelve Hours of Sebring are available now at SebringRaceway.com.