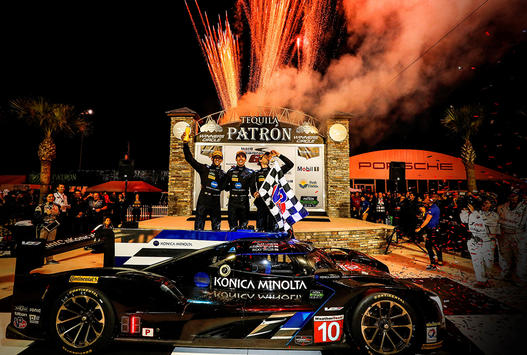 This time, there was no controversy – just an old-fashioned butt-whipping by the winning Prototype team.

The No. 10 Wayne Taylor Racing/Konica Minolta Cadillac DPi V.R, with Ricky Taylor behind the wheel, won the 2017 Rolex 24 at Daytona, with the No. 5 Action Express Mustang Sampling Cadillac DPi V.R finishing second. But it wasn’t pretty – with just seven minutes left, Taylor nudged the No. 5 out of the way in turn 1, causing the No. 5 to spin.

The top two finishers in Saturday’s 65th Annual Mobil 1 Twelve Hours of Sebring were the same, but Ricky Taylor didn’t need to nudge anybody this time, winning with a healthy 13.614-second lead over the No. 5. The car Ricky Taylor shares with his brother Jordan and newcomer Alex Lynn – at Daytona, the Taylor brothers’ co-drivers were NASCAR star Jeff Gordon and Max Angelelli – was fast and reliable all day and was never seriously challenged.

“I really wanted this race win to be conventional,” said Ricky Taylor. “This was a dominant win, so nobody can question it.”

Third was the No. 5’s team car, the No. 31 Action Express Whelen Cadillac DPi V.R of Dane Cameron, Eric Curran and Mike Conway, making it a Cadillac sweep of the Sebring podium.

“They ran a flawless race, they did an excellent job,” said Fittipaldi of the No. 10 team. “They were very strong when it counted. We pretty much got beat fair and square.”

Finishing fourth was the No. 85 JDC-Miller ORECA LM P2 entry, driven by Chris Miller, Stephen Simpson and Misha Goikhberg. That team moved up from the Prototype Challenge class this year, and while they finished four laps behind the winner, they are definitely contenders.

The No. 55 Mazda DPi rounded out the top five. It was a really disappointing race for the Mazda team – their second car, the No. 70, brought out the first of the six full-course caution flags early on as driver Joel Miller lost the car’s brakes and drove hard into the tire wall in turn 17. That car finished eighth.

The No. 2 Tequila Patron ESM Nissan DPi, driven by Scott Sharp, Ryan Dalziel and Pipo Derani, also ran into issues. The No. 2 team not only won Sebring last year, they won the 2016 Rolex 24 at Daytona. But the car battled turbocharger problems even before race day, and ended up 11th.

Also wishing they had a do-over was the No. 13 Rebellion Racing ORECA LM P2 of Sebastien Buemi, Nick Heidfeld and Neel Jani. On Friday, Jani qualified on the pole, but they ended up ninth in the race after battling a variety of mechanical problems all day.

In Prototype Challenge, it was another repeat winner from Daytona – the No. 38 Performance Tech ORECA FLM09 – but it was closer this time. The team won Daytona by 22 laps, but the margin at Sebring was two laps over the No. 8 Starworks ORECA FLM09 of Garrett Grist, Max Hanratty and Sean Rayhall.

The No. 38, with drivers James French, Kyle Masson and Patricio O’Ward, did what they did at Daytona: Execute, and make no mistakes.

“It’s awesome to win again in Florida,” said Masson, who lives in the Orlando suburb of Windermere.

Sebring is his home track, and besides the Mobil 1 Twelve Hours of Sebring, he also won both Mazda Prototype Challenge races on Thursday and Friday.

“It feels really good to start the season off like this,” said French.

The race was fast and surprisingly clean, though in the first half of the race, there were numerous mechanical problems, which one team manager suggested were due to drivers running over the curbs in the corners too hard. After the sun went down, the attrition slowed, and the drivers seem to settle into a rhythm.

This is the final year for the Prototype Challenge class, so the field, just four entries, was smaller than it has been in the past. In 2018, the IMSA WeatherTech SportsCar Championship will have three classes – Prototype, GT Le Mans and GT Daytona.

For those three classes, the next race on this year’s schedule is on the tight street course at the Long Beach Grand Prix April 7-8, with the Prototype Challenge class taking the weekend off.