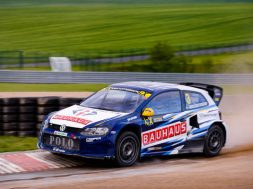 Both Volkswagen Polo RX Supercars made it to the final of the third race in the FIA World Rallycross Championship in Mettet (B). Anton Marklund (S) completed the race in fourth place in his 600 HP Volkswagen Polo RX Supercar, just missing out on a podium finish. His team-mate Johan Kristoffersson (S) finished the final in sixth place. The two Volkswagen Polo RX Supercars had already shown that they were capable of winning during the weekend: Kristoffersson posted the fastest time in both free practice sessions on Saturday, and Marklund made a lightning fast start to the final one day later, rocketing to the front from the third row. “After the start, I made a small mistake in the chicane. That is where I lost my podium position,” said Marklund, who recorded his best result of the season in Mettet. The results from Mettet are reflected in the team standings: Volkswagen RX Sweden have strengthened their hold on second place with 83 points. Kristoffersson has climbed to third place in the drivers’ rankings. He is now 20 points behind leader Mattias Ekström (S), the winner in Mettet. Anton Marklund has 25 points and is in eleventh place in the drivers’ standings. The next race weekend will take place on 27th to 29th May at Lydden Hill (GB).