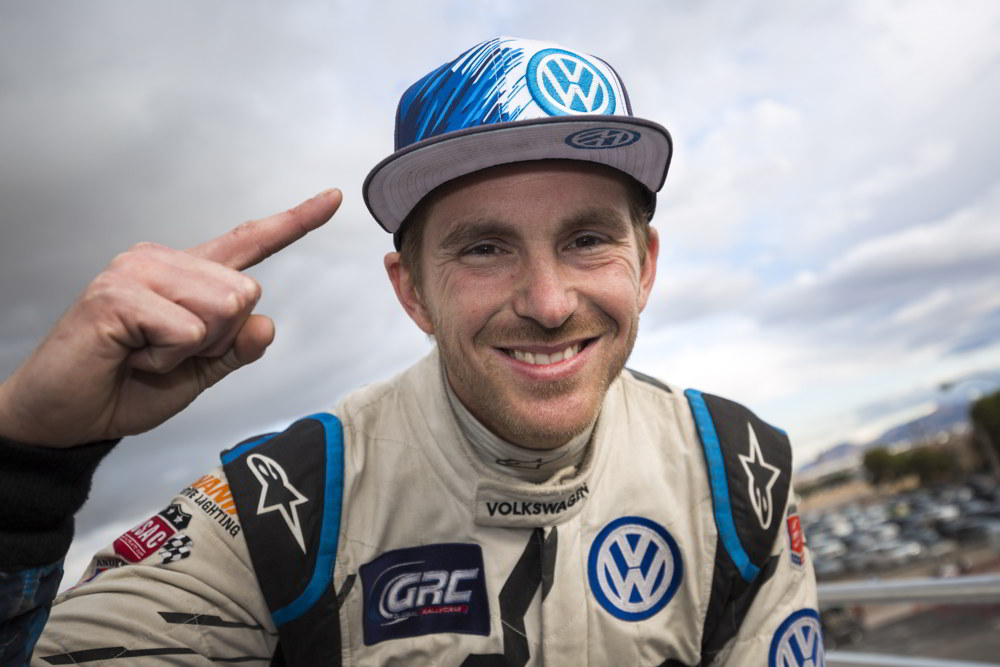 Scott Speed wins coveted Driver title in Las Vegas (USA)
Impressive record for the Volkswagen Beetle GRC
Volkswagen runner-up in the Manufacturer Championship
Scott Speed (USA) is the new champion of the Red Bull Global Rallycross (GRC) series in the USA. A podium finish in the final race of the season in Las Vegas was sufficient to earn Speed the title at the wheel of the Volkswagen Beetle GRC. Speed followed a victory in the heats with a win in the semi-final, before starting the final from pole position. He then produced a measured race – heavy rainfall had transformed the circuit in the heart of the American metropolis into an ice rink – to finish third in the final. Volkswagen ended its first season with the Beetle GRC in second place in the Manufacturer Championship.

“Winning the title at the first attempt in the first full Red Bull Global Rallycross season with the Beetle is a fantastic success for Volkswagen,” said Volkswagen Motorsport Director Jost Capito. “The Beetle showed what it was capable of, particularly in the second half of the season. It boasts an impressive record. The Volkswagen Andretti Rallycross Team and our technicians in Germany worked perfectly together. It is always a very close affair in Global Rallycross, and the races are fiercely-competitive. That makes us all the happier to have won the title. I would obviously also like to say a big thank you to our drivers Scott Speed and Tanner Foust. They have had a great season and pushed each other to outstanding performances. Congratulations, in particular, to Scott on his thoroughly deserved Driver title.”


“I am absolutely delighted with this title. It is an indescribable feeling,” said Speed after the final. “The Volkswagen Beetle GRC is a fantastic car. I would like to thank everyone at the Volkswagen Andretti team. This success would not have been possible without their outstanding effort. It has been a long season, and we were always confident that the Beetle is a natural born winner. We worked hard to come through the tricky period at the start of the season, and came away with the title.” Speed’s team-mate Tanner Foust (USA) dropped back through the field following a collision in the final, eventually crossing the finish line in ninth place. He ultimately finished third in the championship.

The Volkswagen Beetle developed into a force to be reckoned with for the opposition in its first full GRC Season. The 560-hp, four-wheel drive Beetle, sent into action by Volkswagen of America and developed in Germany by Volkswagen Motorsport, was the car to beat in the second half of the season. Its record is an impressive one: Speed and Foust made it onto the podium thirteen times this season, climbing onto the top step as winners on five occasions. The penultimate round of the season, a double-header in Barbados, saw Speed and Foust ensure that only they could be crowned champion. The only question still to be answered at the legendary “Strip” in Las Vegas was which of the two Volkswagen drivers would win the title.


Global Rallycross: spectacular race action in the USA and the Caribbean

This year’s Global Rallycross championship featured twelve rounds – in Fort Lauderdale, Daytona, New River, auto city Detroit, Washington D.C., Los Angeles, Barbados and Las Vegas. One of the highlights of the season was undoubtedly the GRC’s outing in Barbados. The Caribbean hosted the penultimate round of the season – one of four challenging double-headers, with two races on one weekend – against the picturesque backdrop of the South Seas. The GRC races are always packed with action and a real draw for spectators – the compact races are followed closely and the subject of much discussion, particularly on social networks. The circuits consist of a combination of asphalt and gravel with spectacular jumps, which often see cars airborne for over 30 metres. Exciting and spectacular races are the order of the day in the GRC.

The Global Rallycross season – the races, the winners