The Volkswagen Express – One-two-three for Ogier, Latvala and Mikkelsen in Spain 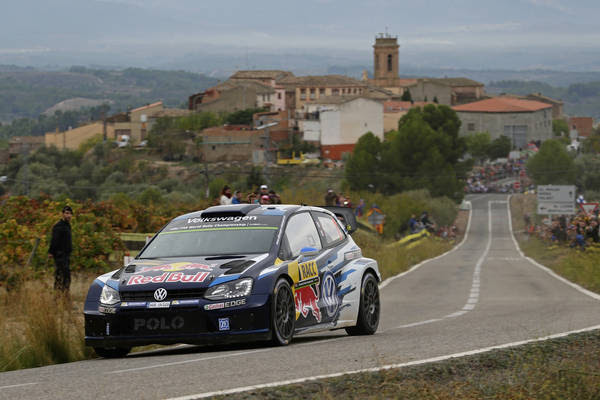 Wolfsburg (24 October 2015). Up, up and away for one, a battle between team-mates for the others – but all on course for the podium: Volkswagen occupies the top three spots at the Rally Spain. Out in front: Sébastien Ogier/Julien Ingrassia (F/F), who go into the final day of the rally on Sunday with a comfortable lead of 54.0 seconds. In the fierce battle for second place, Jari-Matti Latvala/Miikka Anttila (FIN/FIN) have a minimal advantage of 2.9 seconds over team-mates Andreas Mikkelsen/Ola Fløene (N/N) in third place – although a puncture did cost them a lot of time at one point. However, the two Volkswagen duos must keep one eye on Dani Sordo/Marc Martí (E/E, Hyundai) when they tackle Sunday’s final 76.4 kilometres – the Spaniards trail Mikkelsen/Fløene by just 4.5 seconds and are still within striking distance of a podium position.

After switching from gravel to asphalt, day two of the Rally Spain was held on perfect stages, akin to driving on a racetrack. All eight stage wins went to the Polo R WRC: five to Ogier, three to Latvala.

Quotes after day two of the Rally Spain

Sébastien Ogier, Volkswagen Polo R WRC #1
“Another fantastic day for Julien and me at the Rally Spain. The asphalt stages are fantastic. As a driver, you have an incredible amount of fun in the cockpit. And I am coping better with the new Michelin tyres than I did with the previous version. The Polo is reacting absolutely perfectly to any movements of the steering wheel. It is like being on a racetrack, with the difference being that we also use the width of the streets for the racing line but don’t have any run-off zones. That gets the adrenalin pumping a bit. I knew I would have to put my foot down from the word go to keep Jari-Matti, in particular, at bay. When he suffered his puncture, which led to us having a larger lead, we were able to take a few less risks.”

Jari-Matti Latvala, Volkswagen Polo R WRC #2
“I got off lightly today – I am still second. In the morning I had problems under braking. Once I had solved them, I immediately set about trying to regain the time I lost. In doing so, I took too many risks and suffered a puncture in a right-hander, early into the twelfth stage. I could obviously say goodbye to any hopes of winning after that. Despite this, I was able to regain second place by the end of the day. I will try to defend that position through to the finish.”

Andreas Mikkelsen, Volkswagen Polo R WRC #9
“My plan is gradually bearing fruit. Like yesterday, I wanted to avoid doing anything crazy today. Instead, I tried to set a fast but intelligent pace. My goal was to catch Dani Sordo by the end of the rally and, if possible, to overtake him. We have already achieved this on Saturday. We are also in the midst of a nice battle for second place with our team-mate Jari-Matti Latvala. All in all, it has been a good day for us. The plan for tomorrow is to keep the pressure on and battle with Jari-Matti right down to the finish line.“

Jost Capito, Volkswagen Motorsport Director
“All three Volkswagen drivers performed well today, and it seems as though the Volkswagen Express is chugging along nicely. With eight wins from eight stages, we only had one slight blemish today: Jari-Matti Latvala’s puncture, which he suffered after taking a few too many risks. However, even that cloud has a silver lining: we are now treated to a thrilling battle for second place, with one of those in contention being Andreas Mikkelsen, who climbed a lot of places today. At the moment, it may look as though Sébastien Ogier is disappearing into the distance. However, you can never be certain of anything in the World Rally Championship. The team has an exciting Sunday ahead of it. We are looking forward to it, especially as we have three Volkswagen drivers leading the way.“

And then there was …

… another possible milestone for the world champion *. Sébastien Ogier is homing in on his 400th stage win. The 2013, 2014 and 2015 champion currently has 396 stage wins to his name. He now has a further six stages on the final day of the Rally Spain to reach the next round figure. What are his chances? Well, Spain has proven to be a happy stomping ground for Ogier in the past. It was here, in 2013, that the Volkswagen driver claimed his 200th stage win – exactly two years ago.