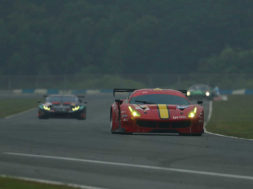 The first race of 2017 for the major GT championships, takes place this weekend in Buriram, Thailand, and will be the third in the Asian Le Mans Series calendar. For two years now the latter’s seasons have straddled the old and new years. The championship began on 30 October in Zhuhai and continued in December at Fuji. The Buriram round is the third of four events of the season and Ferrari customer teams with their 488 GT3s are keen to do well here too.

Sweltering heat. In Thailand drivers will have to contend with an extra enemy: sweltering heat and humidity, which this season has been alternating with isolated and extremely violent sudden downpours. Another three 488 GT3s will race along with the above-mentioned cars of Spirit of Race and DH Racing. Rino Mastronardi, Alex Riberas and Olivier Beretta will take the wheel of DH Racing’s second car, the no. 3, while, after an unlucky start to the season, Anthony Liu Xu, Davide Rizzo and Alessandro Pier Guidi will vie for victory in car no. 37 of the BBT team. Then finally Weng Sun Mok, Keita Sawa and Matt Griffin will compete in Clearwater Racing’s car no. 61. The race is on Sunday.