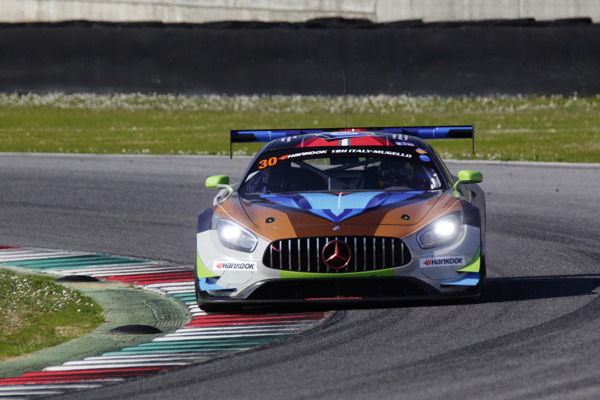 The Customer Racing teams with the Mercedes-AMG GT3 showed a strong performance in the Italian round of the international 24H Series, the Mugello 12-hour race. Four cars from Affalterbach finished in the top ten of the endurance race. IDEC Sport Racing claimed second place in the overall classification. In the A6-Am class, the Hofor Racing team secured victory with its Mercedes-AMG GT3 with starting number #1. With third place in the A6-Am class for SPS automotive-performance, another podium finish went to a Mercedes-AMG Motorsport Customer Racing team.

Affalterbach – Mercedes-AMG Motorsport remains successful in the 24H Series: after a podium finish and a class win in the season opener at Dubai, teams with the Mercedes-AMG GT3 also put in a very good performance in the second round at Mugello. In the 12-hour race at the 5.245 kilometres long track in Tuscany, IDEC Sport Racing scored the best result by finishing second overall. The Mercedes-AMG GT3 with starting number 17, driven by Paul Lafargue, Patrice Lafargue und Dimitri Enjalbert (all FRA) started from seventh place on the grid. With consistently fast lap times and largely trouble-free stints, the French trio was among the front-runner throughout the race. After 326 laps, final driver Dimitri Enjalbert drove second place home.


The #30 RAM Racing Mercedes-AMG GT3 also showed an error-free performance: Tom Onslow-Cole (GBR), Remon Leonard Vos und Kevin Veltman (both NED) started from fifth place. After a faultless drive, the trio managed to work its way up into third in the final stages of the race, but came under pressure just before the end and still lost out on its podium finish, coming home in fourth place.

With starting number 1 on the Mercedes-AMG GT3, Hofor Racing took on this race. The reigning 24H Series champions had an effective strategy for the race that saw the team gradually work up its way from 20th on the grid to fifth place overall. Thus, Roland Eggimann, Chantal Kroll, Michael Kroll (all SUI), Christiaan Frankenhout (NED) and Kenneth Heyer (GER) also secured the class win in the A6-Am classification.


The first third of the race, that was held on Friday afternoon, saw another two Mercedes-AMG GT3, the cars with starting numbers #25 and #38, establish themselves among the front runners. After the mandatory intervention, during which parc fermé rules were in force for all cars, the race resumed on Saturday morning. A few minutes after the start of the second segment, the ninth-placed #25 HTP Motorsport Mercedes-AMG GT3 collided with the MS Racing car with number #38, that ran in fifth place. After a repair of over one hour, HTP Motorsport’s Brice Bosi (LUX), Wim de Pundert (NED) and Bernd Schneider (GER) were able to continue their race. The team worked its way back up to 22nd place at the finish. For the MS Racing car with Alexander Hrachowina, Martin Konrad, Zeljko Drmic (alle AUT) and Edward Lewis Brauner (GER), however, the race was over.

Paul Lafargue, IDEC Sport Racing, Mercedes-AMG GT3 #17: “In preparation for the race, we tried many things and chose a set-up that proved to be very good. The team worked together perfectly. We started from seventh place and the race went pretty well altogether. There were some incidents, but we dealt with them in a good way. All the time, we were able to count on a reliable and performant car that was very easy to handle. For us as the drivers, that was very good!”

Michael Kroll, Hofor Racing, Mercedes-AMG GT3 #1: “Once again, we managed to score victory in the A6-Am class with the Mercedes-AMG GT3 and finish fifth overall. That is, of course, the result of the reliability of the car. While our rivals retired one after another, we were able to continue without any issues until the very end. Many thanks to Mercedes-AMG Motorsport for getting us this far up to the front again.”

* Excerpt, subject to confirmation by the organiser