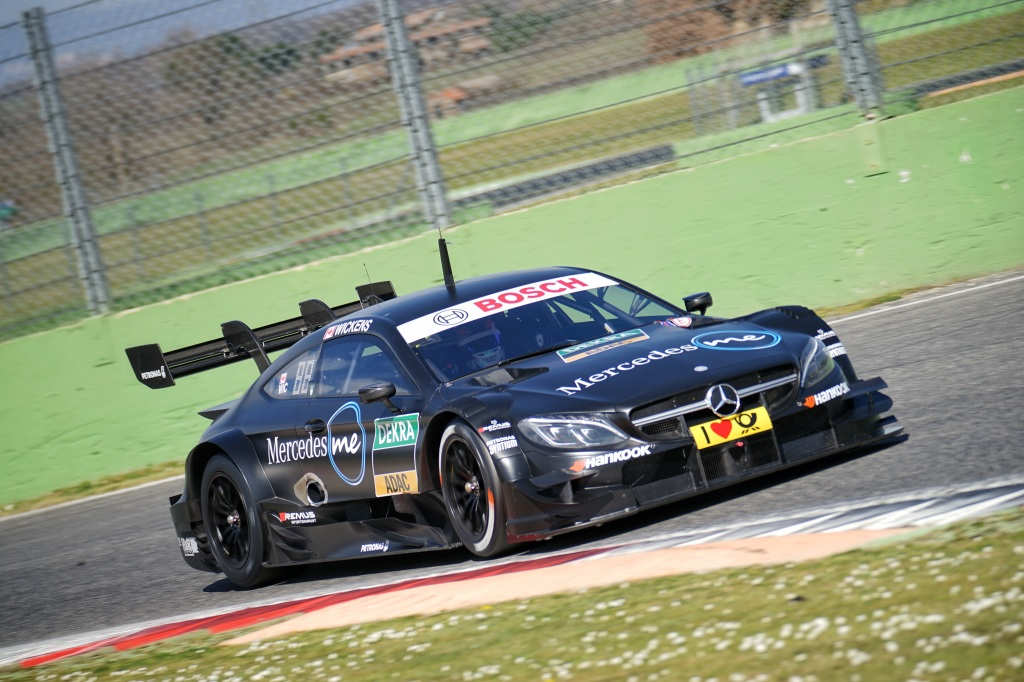 More than 2,100 kilometres of testing for the Mercedes-AMG Motorsport DTM Team during the year’s second round of tests in Vallelunga

Preparations for the new DTM season are in full swing. The Mercedes-AMG Motorsport DTM Team completed the second of three rounds of testing this week in Vallelunga, Italy (14th -16th March), in the run-up to the season opener at Hockenheim. Robert Wickens, Gary Paffett and Edoardo Mortara were at the wheel, and between them, the three DTM race winners posted 518 laps, equating to 2,116 km, of the Autodromo Vallelunga.


Robert Wickens kicked off the test week on Tuesday. “That was quite a nice birthday present,” said the Canadian, who celebrated his 28th birthday on Monday 13th March. Posting 140 laps of the circuit put the biggest smile imaginable on his face to mark his special day as he gathered valuable information and data for the upcoming season. “We had our own programme and are pretty happy with it. We managed to check off every box on our list”

Team captain Gary Paffett continued Robert’s work on Wednesday with another productive day of testing but had to first familiarise himself with the 4.085-km circuit, on which he had never raced before. “I like the track and got up to speed pretty quickly,” said Gary, who completed a mammoth day’s testing. “We did over 200 laps, which is pretty amazing. It was hard work, but we collected lots of useful data.” The programme included a mix of long and short runs. The main focus was on understanding the new tyres. “It was a really good day,” said Gary, summing up.

On Thursday, Edoardo Mortara, the latest driver to join the squad, completed the week of testing in Italy. “We posted lots of laps today and tried out many things,” said the Italian, who raced once or twice at Vallelunga in the early days of his career. “We now need to analyse the data from Portimão and Vallelunga in order to be well prepared for the final round of testing in Hockenheim. The tests here were very informative, and I think we’ve taken a step in the right direction.”


The team can now draw on the data from more than 4,218 test kilometres after the first two weeks of testing in Portimão and Vallelunga. Head of Mercedes-AMG Motorsport DTM Ulrich Fritz commented: “The team have some very taxing weeks and months behind them, but their hard work has paid off so far with plenty of kilometres posted and data collected during two successful weeks of testing. Still, our work is far from over. We must now evaluate all the info, especially with regard to the new generation of tyres, and draw the right conclusions before final testing in Hockenheim.”& amp; lt; /p>

The team will continue with preparations for the new season at the factory in Affalterbach. While the final touches are being made to the programme for final week of testing in Hockenheim (3rd – 6th April), preparations are already under way for the season opener at the Hockenheimring, 5th – 7th May, by which time six cars plus spare parts need to have been made ready.

Test week at Vallelunga in summary: