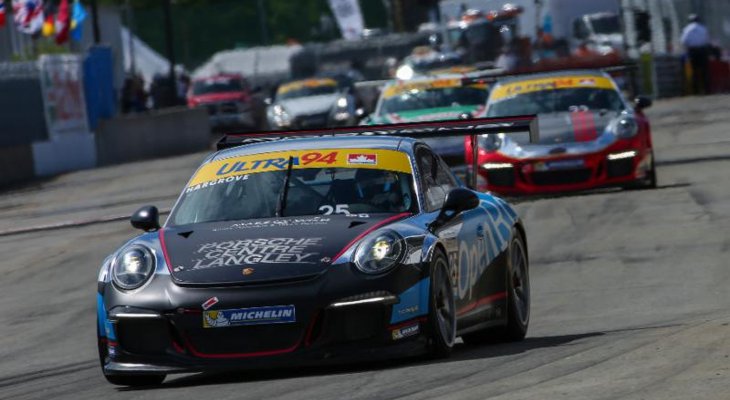 He missed the first two round of the season and is third in the standings, 22 points behind leader Chris Green, with just Rounds 9 and 10 remaining Aug. 28-30 at Canadian Tire Motorsport Park (CTMP) in Bowmanville, Ontario.

Just 40 points are available at the last two rounds. So the math doesn’t add up in Hargrove’s favor.

Yet it’s not a stretch to say Hargrove is having more fun than ever in his second season in the International Motor Sports Association (IMSA)-sanctioned Single-Make Series.

“Last year I couldn’t put a foot wrong because if I did, the points were so tight that I would most likely lose the championship with one mistake,” Hargrove said. “This year it’s a little different. I started 40 points behind, and so it’s all about driving the car as fast as I can every single lap, which is a ton of fun. Not really worrying about the outcome. Just have fun and drive fast.”

That easygoing, simple strategy is working. No math. No worries. Just raw speed.

Hargrove, from Surrey, British Columbia, has won five of his six starts this season in the No. 25 OpenRoad Racing Porsche since joining the series for Rounds 3 and 4 at Toronto. He enters the season finale at CTMP on a four-round winning streak, sweeping the two races in early July at Calabogie Motorsports Park and earlier this month at the Grand Prix de Trois-Rivières.

Many factors besides Hargrove’s obvious talent have contributed to his dominant form since returning to the series.

He is back with OpenRoad Racing, with which he won the Platinum Cup title as a rookie in 2014 with six victories. OpenRoad works hand in hand at the track with longtime series powerhouse Mark Motors Racing.

Hargrove also knows all of the tracks during his second tour of the championship. He’s also much more comfortable driving the Porsche 911 GT3 Cup car this season than in 2014, which was his first year of sports car racing after building a career as one of Canada’s most promising junior open-wheel talents.

“The most important thing that I learned in sports car racing over the year was how to maintain tires on a heavier car throughout the session,” Hargrove said. “It’s a completely different animal to an open-wheel car, and so you just have to respect that they’re heavier and need a little bit more patience.”

Patience has been a central theme for Hargrove this year in his open-wheel career. He won the USF2000 championship in 2013 and finished a heartbreaking second in the Pro Mazda championship last year.

Hargrove, 20, made two Indy Lights starts in March, finishing in the top six in both, and three starts in May in Pro Mazda. But he has made no open-wheel starts since then and has flourished in IMSA-sanctioned Ultra 94 Porsche GT3 Cup Challenge Canada by Michelin sports car racing this summer in Canada.

“What I like about sports car racing is you have a lot of fun in the paddock,” Hargrove said. “Everybody is really friendly. There’s no shortage of nice people, and you’re just having fun. I come here, and I have fun. I look forward to these weekends. I just hope that I can continue doing that.”

Competing and winning in the last two seasons of the Ultra 94 Porsche GT3 Cup Challenge Canada by Michelin has expanded Hargrove’s career horizons.

“My dream as a race car driver is to compete in as many series as I can,” Hargrove said. “So if I go to TUDOR first and then IndyCar or IndyCar and then TUDOR and then go to Le Mans and go and run a NASCAR race, I’m totally open to doing whatever. The dream is IndyCar, to go and win the Indy 500, but the even bigger overall dream is to race as much as I can and win all the big races.

“I used to compare (open wheel and IMSA sports car) and say, ‘Oh, one’s this, and one’s that.’ Now I just hope I can continue both equally and see which way it takes me. But I have a passion for both now.”

The Ultra 94 Porsche GT3 Cup Challenge Canada by Michelin enters its fifth season in 2015 ready to produce more intense, exciting competition for semi-professional and aspiring professional drivers in the world’s most produced and iconic race car, the Porsche 911 GT3 Cup. The International Motor Sports Association (IMSA)-sanctioned championship is one of 20 global Porsche single-make Cup Racing series and is the perfect platform for aspiring drivers to ascend to the highest levels of GT competition, such as the TUDOR United SportsCar Championship.

Racing is divided into two classes – Platinum Cup, featuring the 2014 and 2015 Porsche 911 GT3 Cup car, which is based on the seventh, and current, generation of the street car; and Gold Cup, which is comprised of the previous iteration (model years 2010-2013) of the race car. A Masters Championship also is conducted in the Platinum class. Each class is awarded with its own podium at the end of every race and individual champion at the end of every season. Points are awarded by finish in class.