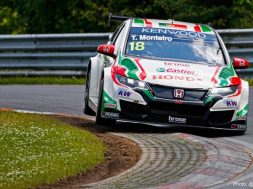 Tiago Monteiro lived through green hell literally and figuratively on the legendary Nordschleife circuit today. Starting from pole position for the first race of the fifth round of the FIA World Touring Car Championship, WTCC, the Portuguese driver led most of the race and was getting ready to be crowned the winner when a tire on his Honda Civic exploded. Unable to control the car, Tiago violently hit the rails before returning to the track where he was rammed by the Citroën of Yvan Muller. Tiago emerged from the wreckage under his own power, but was taken to the closest hospital for a medical checkup which thankfully revealed no serious injury.

Strongly shaken by the violent impact, Tiago Monteiro explained how he felt through the accident… “It was a very fast section of the circuit, over 230 km / h and it all happened in a flash. The tire blew and I lost control of the car. I felt violent pain in my neck, head, back and ankle, but the tests have very happily revealed that it is just muscle pain from the violent accident.”


The Nordschleife weekend was a double punishment for Tiago and Honda who also learned of their disqualification from the Hungarian and Moroccan races after the panel of stewards concluded that their Honda Civic’s flat bottom did not comply with the technical regulations. “I did not expect that my results and those of the team would be disqualified because Honda ensured that the Honda Civic was consistent and has therefore appealed the decision. We hope to maintain our results that were a just reward for all the team’s hard work,” said Tiago.

The Portuguese driver will take a rest over the next few days to make sure he is fully recuperated for the 11th and 12th races of the FIA WTCC that will be held on June 12 in Russia.