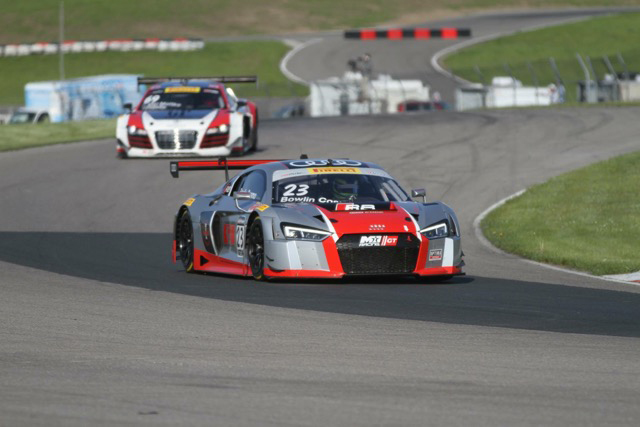 Circling the date for the Pirelli World Challenge (PWC) event at the Canadian Tire Motorsports Park early in the season, M1 GT Racing would look north of the border for the first round of the new PWC Sprint-X Championship. Featuring two, one-hour long races that encompass one driver change per race, M1 GT Racing entered two strong and talented teams in their Audi R8 machines and came home with four top-five finishes including a podium in both Saturday and Sunday’s wheel-to-wheel competition.


“Overall it was a great weekend for M1 GT Racing,” explained Remi Lanteigne, who took on the roles of Team Manager and Team Engineer. “Both of our cars performed very well and we were able to learn a lot with four drivers and two cars on track.”

David Ostella and Dion von Moltke would partner their driving efforts in one of M1 GT Racing’s Audi R8’s and did not disappoint scoring a second place finish in Saturday’s feature event and returned to the podium on Sunday with a third place result. Ostella would make a return to sportscar racing after a brief hiatus and throw his hat in the mix with no testing behind the wheel of an M1 GT Audi R8 as he was quickly on pace with series regulars.

“The weekend overall was a great success not only for myself but for M1 GT Racing as a team. We walked away with two podium finishes and I couldn’t be more thrilled. This was my first weekend with the team and with the R8 and I felt right at home with the crew. Dion was a huge help as my teammate because of his experience in the car and just accelerated my learning curve over the weekend,” stated David Ostella.


“We had an unfortunate part failure in Friday practice that took us out of qualifying but I was confident that Dion would be able to make it up in the first race, and he did,” Ostella continued, “The team worked hard all weekend to make sure we had a solid car for the races and with that help, we were able to stand on the podium twice. There is still some fine tuning that needs to be done to the car and most of all just me getting the track time in the car and getting more comfortable with its limits. The next Sprint-X event is at the Utah Motorsports Campus in Utah and I look forward to working with the team to ensure we are even more prepared.”

“I have to thank all my sponsors for their support and I hope this was great token of appreciation for them to bring home two podium finishes,” Ostella concluded.

Entering the first Sprint-X event, von Moltke, who is an Audi Brand Ambassador, would run for the first time on the Pirelli tire and the first time in GT3 trim. Just as his teammate Ostella, he was quickly on par with the fastest of the Sprint-X competitors and was able to work with David and the M1 GT squad to stand on the podium twice this past weekend.


“Overall I am pleased with our first weekend together as a team as well as the very first race weekend of the Pirelli World Challenge Sprint-X Championship. To come away with a double podium speaks loudly to how well the team came together, especially considering it all happened with just over a week before our first session on track at the Canadian Tire Motorsports Park!  We definitely had our challenges throughout the weekend, but we have clear areas where we know we can improve,” expressed Von Moltke. “With a decently big gap until the next race we have a lot of time to work on the areas we as a team need to improve.  Overall I know I can improve upon my performance as well.  So we will be working hard to come back stronger than ever in Utah for the second event weekend of the Pirelli World Challenge Sprint-X Championship!”

Walt Bowlin would share driving duties with driver coach Guy Cosmo as the duo would end the weekend with a pair of fourth place finishes. Showing that the 2016 Audi R8 LMS has speed, Cosmo challenged for the quickest lap times of the weekend while Bowlin once again did a solid job behind the wheel and improved dramatically throughout the weekend.

“Admittedly we had higher expectations for this weekend but a pair of fourth place finishes for Walt and myself and two podiums for our sister car certainly isn’t so bad,” explained Guy Cosmo. “Canadian Tire Motorsports Park is an extremely demanding track and Walt drove really well here. He continually improved over the course of the weekend and put in two solid race performances.”

Cosmo continued, “The beauty of the Sprint-X format is that each driver has an opportunity to experience both the start and finish of a race and this is an invaluable experience in a driver’s development as well as a lot of fun. I really enjoyed driving the 2016 Audi R8 LMS around here and the M1 GT Racing crew worked hard to make improvements to our setup each session. We weren’t as strong as we wanted to be on Friday and Saturday but collectively, along with our partners at Audi Sport customer racing, we found the missing link that brought our R8 LMS back to it’s impressive form. During Sunday’s race we certainly ran strong. Now we’ve got a great starting point moving forward and I’m excited for our next events.”

“We had a great weekend at Mosport. Started two Audi R8’s in the Sprint-X series and came away with two podium results,” explained Walt Bowlin. “Guy Cosmo and I worked hard over the weekend to adjust the setup along with our engineer. The new Audi is really a phenomenal car and we are learning more every race on how to extract the most out of its awesome abilities. Guy really guided me this weekend and I feel I took a big step forward with his assistance. I can’t thank Dion for his generous contribution to our program. Having a real pro like him with us was an honor and we hope to see more of him this year. David Ostella was unbelievable this weekend. This was his first time in the car without testing and he was right on par. His race pace was excellent. I expected it having driven with David in the past but it was quite a show.”

Bowlin continued, “I want to thank our Race Engineer Remi Lanteigne who did a phenomenal job. The whole crew worked together and really made this an excellent weekend for M1 GT Racing. I also want to thank Audi Sport customer racing for their help and for producing such an incredible racecar. We hope to continue this success moving through the rest of the season.”

With the first event weekend in the Pirelli World Challenge Sprint-X now behind them, David Ostella and Dion von Moltke currently sit second in the championship title chase.

M1 GT Racing would like to thank all of their 2016 partners and supporters. A special thank you to Audi Sport customer racing, Tampa Bay Jaw Surgery, Surgery Centers of America, Spyder Active Sports Wear and SkndSkins.