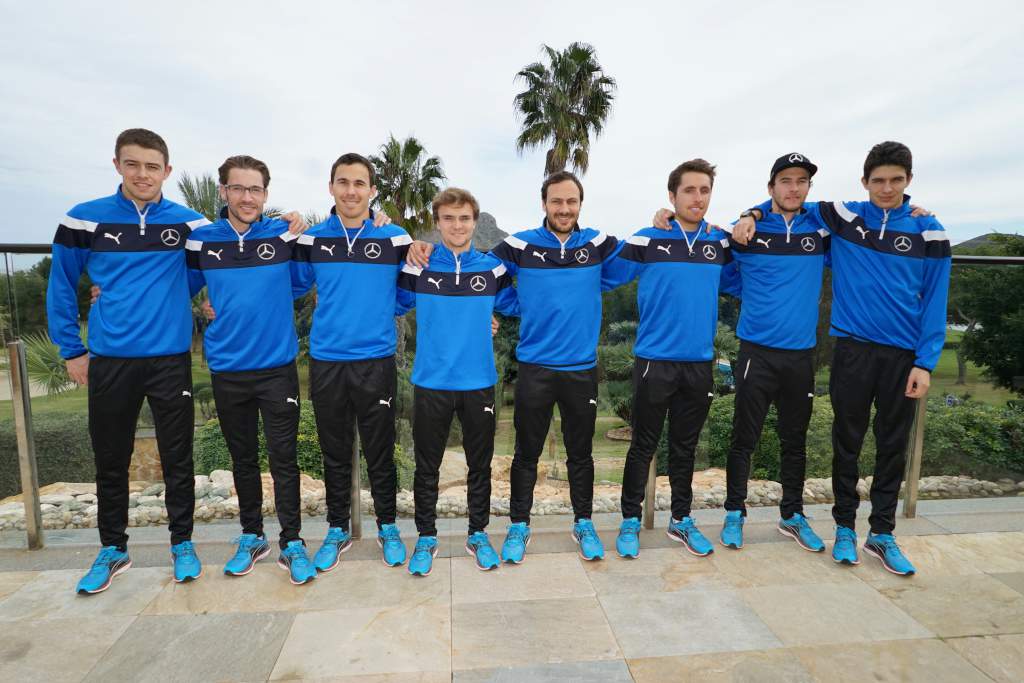 Reallocation of drivers in preparation for title defence. The Mercedes-AMG DTM Team has undergone a major reshuffle prior to the 2016 DTM campaign. A DTM rookie and four internal transfers will put a different complexion on the upcoming season.

The Mercedes-AMG DTM Team HWA has secured the services of Paul Di Resta, Maximilian Götz, Daniel Juncadella and Robert Wickens. For Götz and Juncadella, this will be their first year driving for the most successful team in DTM history, and also the one which won the drivers’ and the team titles last year.

The Mercedes-AMG DTM Team Mücke will have two new drivers going into the new campaign. Ahead of his second season in the DTM, Austria’s Lucas Auer is switching from ART Grand Prix to the Berlin-based outfit. Auer has already driven for the team run by Peter Mücke in the FIA Formula 3 European Championship. DTM race winner Christian Vietoris is also well acquainted with Mücke Motorsport, having already been part of the setup during his time in Formula 3 – he finished the 2009 Formula 3 Euro Series as runner-up in a Dallara-Mercedes entered by Mücke.


The young Frenchman Esteban Ocon is set to make his DTM debut for the Mercedes-AMG DTM Team ART, having won the 2015 GP3 Series championship with them. He also spent last season as test and development driver for the Mercedes AMG DTM Team. He now starts alongside the experienced Englishman Gary Paffett who is preparing to contest his 13th DTM season in 2016. The 2005 DTM champion gave his support to the French team on their entry to the series in 2015.

Lucas Auer: “I’m delighted to have been signed by Mücke Motorsport for my second DTM season. I’ve already driven for Mücke in Formula 3 when I experienced a lot of highs as well as some lows with the team – we went through thick and thin together. So I am very pleased to now have the opportunity to drive for Mücke in a completely different racing series. In general, we at Mercedes-AMG DTM work very closely and with a great deal of mutual trust across team boundaries, so that for me it feels like one big family. We will therefore be mounting a serious challenge with combined forces.”

Maximilian Götz: “First of all, I’d like to thank Mücke Motorsport for the past year. We had a great time together and have grown close over the year. Consequently, I have mixed emotions about the move. I have always felt very much at home with Mücke, but obviously it’s an honour to be driving now for the most successful DTM team of all time. Although there are no great differences between the Mercedes-AMG DTM teams, HWA have something of a legendary status in the DTM. All previous Mercedes champions have come from this team. But for me, it is also clear that I now have to further raise my performance so as to score points on a regular basis and to finish on the podium some time soon.”


Daniel Juncadella: “After three years at Mücke Motorsport, I’m transferring to HWA this season. This will be the first time that I have driven for HWA. I am very excited about the changes. At the same time, it is also a new challenge. A different team always means other structures, other procedures, a different atmosphere, and of course new team-mates. I am really looking forward to the new partnership and hoping that the change will bring me closer to achieving my goals.”

Esteban Ocon: “I’m pleased to be back as part of the ART Grand Prix team. I won the GP3 Series title with ART Grand Prix last year, so it’s fantastic to be working with them again and hopefully continuing our successful adventure together.”

Christian Vietoris: “I’m really looking forward to my new job at Mücke Motorsport, and I just can’t wait to get back behind the steering wheel. I’ve already driven for Peter Mücke – that was in Formula 3 a few years back. So basically, this is like a homecoming for me after spending the last four years as a member of the HWA squad. A change of scenery for me always summons up extra energy and gives me an extra boost of motivation. So I believe Mercedes took the right decision to shuffle the drivers around. Although I have many friends at HWA, it’s still a great feeling to make a fresh start.”

Ulrich Fritz, Head of Mercedes-AMG DTM: “We decided to rearrange the allocation of drivers for the upcoming season to provide new impetus. I’m convinced that a change of environment gives people extra motivation. In particular, the exchange of ideas and of new approaches to dealing with challenges is to everyone’s benefit. We made sure that, in arranging the team, we combined DTM experience with youthful thirst for action. The best example of that is certainly the pairing of Gary with Esteban, but the same goes for the combinations of Paul and Max and of Christian and Lucas.”