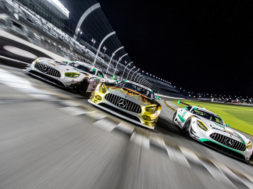 Roll on the new motor racing season! Now that we have Christmas and New Year behind us, we are off to a cracking start. The first events on the 2017 calendar are the 24 Hours of Dubai and the 24-hour race at Daytona.


Winter action: Two of the Mercedes-AMG DTM squad are already getting some early driving practice in during January. Robert Wickens joins StarWorks Motorsport for the legendary 24 Hours of Daytona. Meanwhile, Felix Rosenqvist has competed in the first ever Formula E race hosted by Las Vegas. The racing all-rounder also cut a fine figure in a virtual contest, taking second place behind Sim racing specialist Bono Huis as the best of the Formula E contingent.

Test review: The Roar Before The Rolex 24

The Mercedes-AMG GT3 ‘roared’ around the track in the first test sessions of the new year (6th – 8th January) at the Daytona International Speedway. Teams and drivers had ample opportunity to post valuable test kilometres ahead of the main attraction in the IMSA Weathertech SportsCar Championship, the 24 Hours of Daytona (26th – 29th January).

During the course of seven training sessions from Friday through to Sunday, Riley Motorsports Team AMG, Riley Motorsports WeatherTech Racing and SunEnergy1 Racing were able to show off their potential and perform some late fine-tuning. Lone Star Racing confirmed that they will be entering a Mercedes-AMG GT3 (start number 80) with the driver pairing of Dan Knox and Mike Skeen in selected races during the 2017 IMSA season. These will not include Daytona. Three AMG drivers will compete in the Daytona 24-hour race, namely Adam Christodoulou, Maro Engel and Thomas Jäger.


Thomas Jäger (Riley Motorsports WeatherTech Racing): “We were able to test in all weather conditions during the three days: it was warm and cold, dry and rainy. The drivers of the number 33 and number 50 cars have tested together for the first time. The seats have been moulded, the chassis settings have been further adjusted to the Continental tyres and the team got used to working together. We AMG drivers shared our experience of the Mercedes-AMG GT3 in depth with the team, and we’ve made very good progress. The opposition are still difficult to assess, but we were performing at a good level on the test laps. It’s going to be a big challenge, but I’m feeling optimistic about the race later this January.”

Adam Christodoulou, Riley Motorsports Team AMG: “I’ve shared a cockpit with Jeroen Bleekemolen before, so I know how fast he is. It was great to work with Ben Keating and Mario Farnbacher too. Both showed strong pace and put in consistently fast laps. We were very fast all round as a team. The track is simply incredible. You soon forget how steep the incline is, especially near the summit. We reach top speeds of over 270 km/h – and sometimes with three vehicles going wheel to wheel on the steep turn. I am really grateful to AMG and Riley Motorsports for having given me the chance to drive for them in this major 24-hour race in the USA. I am thrilled about this opportunity and can’t wait for it to come around.”

Preview: Ready for the 24H Dubai


Seven AMG Customer Sports teams will be competing in the desert for the first victory of the year (Start: Friday 14th January, 11am CET). Lining up in the 99-vehicle starter field will be Hofor Racing as the reigning champions of the 24H Series and class winners in last year’s 24 Hours of Dubai. The Swiss outfit will be taking their new Mercedes-AMG GT3 for its first competitive outing with one clear objective – to defend their title.

BLACK FALCON are entering two Mercedes-AMG GT3s and are intent on maintaining their impressive record at the race venue on the Persian Gulf. The German team has already celebrated three victories plus a second and third place in the general classification at the Dubai Autodrome with its earlier SLS AMG GT3s.

Further Mercedes-AMG GT3s will be deployed by HTP Motorsport, IDEC Sport Racing and SPS automotive-performance, as well as an SLS AMG GT3 prepared by Gravity Racing International. The 24-hour race in Dubai has been a popular fixture on the calendar for many of the top teams and drivers in recent years, especially in the A6 class, which is the most hotly contested category this time around with 25 entrants vying for the prestige of winning the first 24-hour race of the new year.