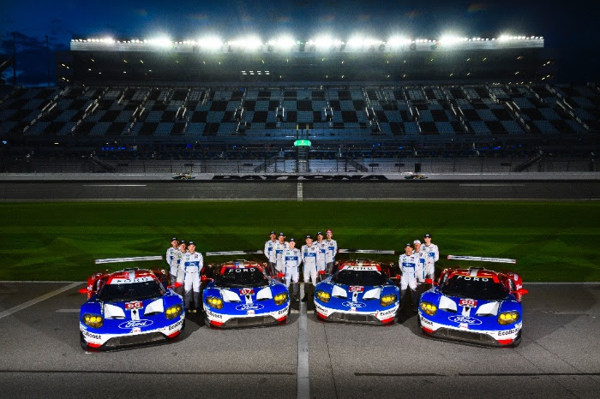 “Congratulations to Ford Performance and Chip,” said Doug Yates, President and CEO of Roush Yates Engines. “WOW, the team did an outstanding job. Winning the Rolex is the result of the combined efforts of Ford Performance, Chip Ganassi Racing and Roush Yates Engines. The twin-turbo Ford EcoBoost performed flawless during the race and we just could not be happier for the team and starting the year off with a win against the best in the world.“

The Ford GTs started the week with No.66 Joey Hand* (USA) Dirk Müller (DEU) and Sébastien Bourdais (FRA) capturing the pole position on Thursday with a class record setting 1:43.473 lap time. No. 67 Richard Westbrook and No. 69 Olivier Pla rounded out the top spots capturing P2 and P3.

The No. 66 of Hand, Müller and Bourdais drove a perfect race. This team of three has now won two of the world’s biggest endurance races in the Ford GT, the 2016 24 Hours of Le Mans and the Rolex 24 At Daytona, GT Le Mans (GTLM) class.

This win marks Ford’s 19th Rolex class win and Chip Ganassi achieved an unprecedented seventh team win at Rolex 24, known historically as the first leg in the triple crown of endurance races to be followed up by the Twelve hours of Sebring and the Petit Le Mans.

“This is a great win for our GT program,” said Raj Nair, Executive Vice President of Global Product Development and Chief Technical Officer, Ford Motor Company. “It’s a credit to everyone involved, from our Ford team to Ganassi, Roush Yates, Multimatic and Michelin. Conditions were very difficult throughout much of the race, but that winning car had no issues at all against some of the best competition in the sport. There’s a lot to be proud of with this win and we hope it’s the start of a great season for our teams.”

Hand in the No. 66 led the GT Le Mans (GTLM) class off the grid alongside the No. 67 Westbrook. Hand completed three stints and set a strong pace before turning the car over to Müller. Bourdais kept the Ford GT clean during the rainy evening stints. Müller would finish out the 2,321 mile, 652 lap endurance race in dramatic fashion by overtaking the lead with just over 30 minutes to go by making a stellar move on the Ferrari No. 62 Calado and then held off the No. 911 Porsche during the last 15 minutes of the race to take the checkered flag.

“24 hour endurance races are always a true test of not only driver and machine, but the entire team” said Wade Riesterer, Technical Manager Road Racing. “In this case, monitoring the constantly changing track conditions and making the right strategy decisions were key. We came here on a mission and the entire Ford Performance, CGR (Chip Ganassi Racing) and Multimatic Motorsports teams all worked together to get the win. Congrats everyone, outstanding!”


The 2017 IMSA WeatherTech Sportscar Championship season has just begun. View the full schedule below or online at www.roushyates.com.