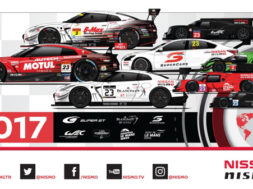 YOKOHAMA, Japan – The 2017 motorsport season is about to start, and on behalf of Nissan, Takao Katagiri, CEO and president of NISMO, has now officially announced Nissan/NISMO’s motorsport activities for 2017. These are as follows:

Having won the SUPER GT GT500 Championship two years in a row in 2014 and 2015, but missing out on a third consecutive title after leading the championship until the last event in 2016, NISMO will be back at the track with the driver pairing of Tsugio Matsuda and Ronnie Quintarelli in Nissan’s ace car #23.


Fresh from the GT300 class, GT Academy graduate Jann Mardenborough will step up to GT500, making his GT500 debut with TEAM IMPUL together with teammate Hironobu Yasuda. For the first time in seven years, João Paulo de Oliveira will return to KONDO Racing, which took two victories last year, and will team up with Daiki Sasaki. MOLA will continue with the same strong driver combination from last year, with veteran Satoshi Motoyama challenging the series alongside young gun Katsumasa Chiyo.

Nissan’s new GT500 racer, which incorporates the distinctive design of the standard 2017 Nissan GT-R NISMO, was developed in compliance with the 2017 SUPER GT technical regulations and inherits the competitive and hard-charging spirit of previous incarnations of the Nissan GT-R NISMO GT500.

Officially revealed last November, the car has undergone testing in Japan as well as in Sepang, Malaysia. The updates will be made just before the opening round and are expected to result in an even stronger, more competitive GT-R that will build upon the previous championship winning car’s legacy of dominance within the history of motorsports.

2. CUSTOMER RACING PROGRAMS
Nissan / NISMO will be expanding its Customer Racing program, supplying race cars and engines to teams around the globe.

Customer Racing – GT3 Program
The Nissan GT-R NISMO GT3 debuted in 2012, and since then 33 cars have been sold to compete in Japan, Europe, the U.S., Australia and China – 20 of which participated in global GT3 race series in 2016. The car took numerous victories world-wide and in the Super Taikyu Series; the GT3 GT-R was crowned ST-X class champion. In 2017, NISMO will continue to support Nissan GT-R NISMO GT3 customers by providing vehicles and technical assistance.

While providing technical support to all the Nissan GT-R NISMO GT3 users in SUPER GT, Super Taikyu, and other championships, Nissan / NISMO will support the teams in the following series:

Super GT GT300
NDDP Racing, which focuses on the development of young drivers, will enter the SUPER GT GT300 class with Mitsunori Takaboshi alongside Kazuki Hoshino as his mentor. The operation continues to be managed by B-MAX.

Super Taikyu Series ST-X
KONDO Racing, which took the 2016 series championship with its ThreeBond Nissan Technical College GT-R, will be aiming for two consecutive titles in the ST-X class this year. Tomonobu Fujii has been named as one of the drivers. This collaboration between KONDO Racing and the Nissan Automobile Technical College is a unique program that combines education with motorsports.

In addition to the previously listed entry to the SUPER GT GT300 class, the manufacturer will support Mitsunori Takabosi and his B-MAX Racing Team Japanese Formula 3 entry via NDDP. As Takaboshi’s executive advisor, the team will welcome GT500 driver, Satoshi Motoyama.

In Australia, Nissan will continue to contest the Supercars Championship with Rick and Todd Kelly alongside Michael Caruso and new driver Simona de Silvestro with the Nissan Altima.

Takao Katagiri, CEO and president of NISMO:
“We will be competing in this year’s SUPER GT GT500 class with a new model based upon the 2017 spec GT-R NISMO. We have a firm determination to retake the series championship and, with this in mind, we have reevaluated our cars, drivers, organization and so on in order to ensure we are more prepared than ever. Our team structure consists of four seriously competitive teams that will all be aiming for the title. We will be pouring our souls into this season so we hope to continue to receive the passionate support that we have received from our fans thus far.

“We will also be strengthening our global Customer Racing programs. While we continue to support Nissan GT-R NISMO GT3 customers around the world, we will also begin working on the development of newly evolved Nissan GT-R NISMO GT3. You can expect to see a new state-of-the-art, highly competitive machine that will ensure customers continue to choose the GT-R from amongst the increasingly large variety of European manufacturers and other rival companies’ GT3 vehicles.

“Furthermore, we will also be expanding our engine supply programs. We will be providing highly competitive racing engines and the technical support that we have cultivated throughout the LM P2 to numerous teams to facilitate their success in acclaimed race categories around the world, including the Daytona Prototype International (DPi), the LMP1 (privateer), and various LMP3 series.

“In addition to participating in motorsports, the NISMO brand feels that an important part of its mission is to provide accessible motorsports experiences and participatory opportunities to all of our customers. As a part of that effort we have been proactively expanding our range of NISMO road cars and occasions for driving experiences. We are committed to delivering a wide range of excitement to our fans through motorsports.”