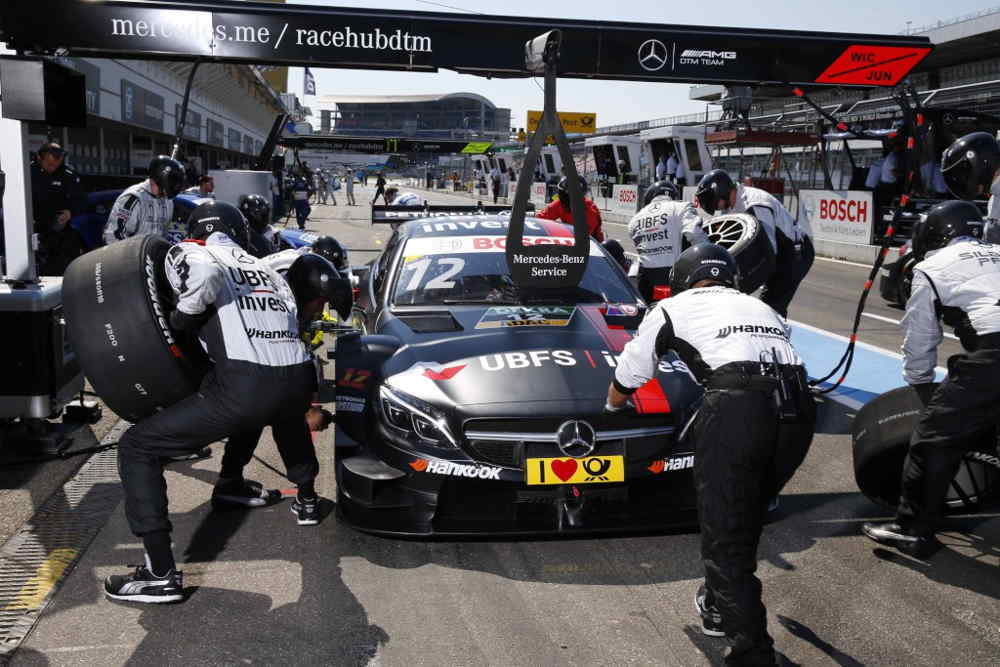 Thrilling DTM season opener for the Mercedes-AMG DTM Team in their home race at the Hockenheimring: Robert Wickens (SILBERPFEIL Energy Mercedes-AMG C 63 DTM) achieved a podium in the first race of the season. This was the Canadian driver’s seventh podium overall of his DTM career.

Looking ahead to race 2: The second DTM race will start on Sunday at 14:33 (live on ARD at 14:15). The third free practice session will be staged at 10:00 and the second qualifying session at 12:30 (live on EinsFestival at 12:25). The Mercedes-AMG DTM Race Hub at mercedes.me/racehubdtm, featuring live timing data, live commentary, fan voting and exclusive video clips hosted by Thore Schölermann will give an insight into what’s happening behind the scenes at the Mercedes-AMG DTM Team during each race weekend.

Comments after the race

Team: SILBERPFEIL Energy / UBFS Mercedes-AMG
(Mercedes-AMG DTM Team HWA)
Car: SILBERPFEIL Energy Mercedes-AMG C 63 DTM
“It’s brilliant to finish on the podium here in the first race. I got away well but then found myself sandwiched between two other cars. It was a tough race, but I’m very pleased that we were able to begin the season as strong as we ended it last year. What a great start! I’d now like to go one better in tomorrow’s race.”
Paul Di Resta (30, Scotland):

Car: Mercedes-AMG C 63 DTM
“That was a good way to open the new season. Unfortunately, I had a problem with the clutch at the start of the race; the guys will therefore have some work to do this evening. It’s good to come fourth again, although that’s the third time in succession for me. Now I’d like to finish on the podium tomorrow. Hats off to the team after all their hard work over the winter; the new car is one with which we can be contenders for the championship.”
Christian Vietoris (27, Germany):

Team: BWT Mercedes-AMG (Mercedes-AMG DTM Team Mücke)
Car: BWT Mercedes-AMG C 63 DTM
“This was an excellent race for me in view of the limited opportunity for pre-season testing. The team did a great job of setting up the car despite the relatively few kilometres of testing I was able to put in here a few weeks ago. We were very competitive from the word go on Friday. I’m very happy with fifth position and have now secured my first points of the season.”

Team: EURONICS/FREE MEN’S WORLD Mercedes-AMG
(Mercedes-AMG DTM Team ART)
Car: EURONICS Mercedes-AMG C 63 DTM
“I made a decent start and moved up the field by a few places over the first few laps. I was also pleased with the car’s behaviour. I then had a good fight with Ekström and Tomczyk. Unfortunately, Ekström hit the side of my car, damaging it badly. After that, things went downhill for me, and I was unable to do anything about it. Too bad!”

Lucas Auer (21, Austria): retired (classified 17th)
Car number: 22
Team: BWT Mercedes-AMG (Mercedes-AMG DTM Team Mücke)
Car: BWT Mercedes-AMG C 63 DTM
“After the problem with the breaks we experienced this morning, my crew did a superb job to get the car ready for the race. It was an incredible race. I had actually intended to approach it as a sort of practice session, but then there was so much overtaking going on that I actually moved up into the points-scoring positions. Unfortunately, I then picked up a piece of debris which got caught in my radiator grille. As a result, the car got so badly overheated that I had to retire from the race.”

Car number: 84
Team: Mercedes-AMG (Mercedes-AMG DTM Team HWA)
Car: Mercedes-AMG C 63 DTM
“Unfortunately, that was not the way you think the start to the season is going to turn out. I had a decent first lap and managed to gain several positions. I then went wheel-to-wheel with Green on the approach to Sachs Corner. Sadly, there was a contact, and the rear end locked up. I spun off track under braking. So, my race was over relatively quickly. I think a good result would have been possible today. At any rate, I was very satisfied with the car’s performance.”

Car number: 12
Team: SILBERPFEIL Energy / UBFS Mercedes-AMG
(Mercedes-AMG DTM Team HWA)
Car: UBFS Mercedes-AMG C 63 DTM
“Unfortunately, that was not a good result to start the season with. I got blocked in qualifying, which cost me a possible position on the first or second row of the grid. If you then have to start from so far back, that always involves a lot of risk in the race. I had a collision with Blomqvist, then lost control of my car and bumped into Glock. Luckily, I have another chance tomorrow to produce a decent result.”

“It’s simply superb to be starting the season with a podium and three cars in the Top Five. All our hard work over the winter months has paid off. But it also has to be said that the race today was a really brutal affair. It was as if all 24 drivers had gone out there with a cutlass between their teeth. For the fans, it was real spectacle. I feel sorry for our guys. We have a job on our hands getting the cars back into shape for tomorrow.”