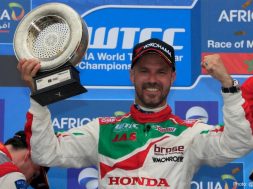 Tiago Monteiro continued his series of strong results by finishing the second race in Marrakech in 3rd place after conquering 4th position in the first of the two races of the FIA World Touring Car Championship, WTCC, played out in Morocco. With a total of 27 points, Tiago retains second place in the championship and is still well in the fight for this years world title.

Both Moroccan races played out entirely different to each other, the first taking place under the blazing sun, the second in pouring rain. “The first race went very well despite my 8th position on the grid that we feared could lead to some complications,” Tiago explained, “But I managed to have good pace and we took advantage of a few mistakes from our opponents to move up to fourth place.”


The rain that fell in Marrakech shortly before the start of the second race took everyone by surprise, but Tiago and Honda managed the situation nicely. “The rain did not ease up for the start but I still went from 3rd to 2nd even though I suffered wheelspin into the first corner which made me fall back to 4th place. The race was long, so we kept a cool head because there was still a lot to do before seeing the checkered flag,” explained Tiago. “I found myself behind Pechito Lopez and I put him under pressure and managed to overtake him. I then had both my teammates in sight. I caught up to them, but I could not afford to take any chances. This podium is very important for our 2nd place in the championship and a Honda 1-2-3 is great motivation for the entire team. We will continue to work hard and I believe that the title is within reach.”

The next round of the FIA WTCC will take place on the most demanding circuit on the calendar, the Nürburgring Nordschleife, from 26 to 28 May.