Tiago Monteiro on the podium after two spectacular races in Hungary 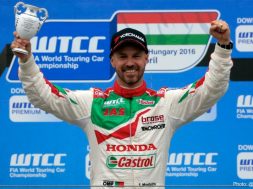 Tiago Monteiro on the podium after two spectacular races in Hungary

Weather conditions were a main factor in this weekend’s round of the FIA World Touring Car Championship, WTCC, which took place on the Hungaroring Circuit in Hungary with heavy rain complicating the lives of drivers and their teams. Tiago Monteiro finished 12th in the first race, but did even better than limiting the damage in the main race by crossing the line in third place after a complex and demanding race.

In the first race, Tiago, like most drivers, decided to take a bet on slick tires as the rain had just fallen in Budapest and the consequences of this choice were dramatic for his chances of success. “At first, it seemed like the most logical decision because the track was drying, but shortly after the start, it began to rain again and the conditions proved to be truly hellish. I did my best to stay on the track. Fortunately, our main rivals have had the same problems and consequently, in terms of points for the championship, it was not too bad,” explained Tiago.


Tiago started from fourth on the grid for the second race. The rain was still quite heavy but all teams had anticipated the weather conditions. “Initially, I lost places, but I regained them on the first lap. Then I tried to keep up a good pace, which was difficult given the conditions. When the safety car came into the pits, my tires were too cold and this caused big problems in regards to grip on the restart. We finished 3rd, benefiting from the problems of others. That is characteristic of this type of race. We are still in the championship race and that’s probably the most important thing,” said Tiago for which, contrary to expectations, the 70 kg of weight was not the main problem in Hungary.

The next round will be held in 15 days in Morocco.