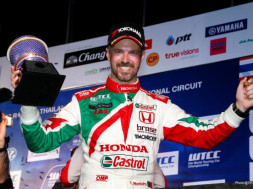 Tiago Monteiro has left his mark on the 11th round of the FIA World Touring Car Championship, WTCC, by winning the second race held on the Thai Chang International Circuit of Buriram. This third win of the season allows the Portuguese driver back (up) into 5th place in the championship.

Having qualified on the first row of the starting grid for race two, Tiago Monteiro had a good start staying in the wake of race leader, Norbert Michelisz. He then pulled out a remarkable overtaking maneuver on the Hungarian 3driver on lap three and pulled out a gap of more than two seconds over the chasing pack. Tiago wasn’t challenged throughout the entire race, which was interrupted with two laps to go as night began to fall on the Buriram circuit.

In the first race, starting from ninth on the grid, Tiago moved up to 7th place, despite a damaged Honda Civic. He was in 6th place into the first corner, but fell back after narrowly avoiding a multi car accident on the first lap when two competitors came too close. After hitting one of them, who was already in distress right in front of him in the middle of the circuit, Tiago managed to continue the race and score valuable points for the championship.


“It was a very difficult race because each lap was like a qualifying lap. It was the only way for me to have a chance to win, “said Tiago. “Everything went perfectly well, I did not made a fantastic start, but I waited for the right moment to overtake Norbert. Then I pushed for another win. Sebastien Loeb was trying to come back at me and at nightfall, it was a bit strange because we had lost some of our reference points. A big thank you to Honda for this victory!”

With just one more racing weekend remaining on the FIA WTCC calendar, the goal is for Tiago to move into 4th place overall, a position he has occupied for the majority of the season. “It’s always been my goal,” confirms Tiago, “And after this weekend in Thailand, we’re close. This circuit was probably not the easiest for our package, but this fantastic result gives motivation to everyone. For the races in Qatar, we will maintain the same level of performance and try to get another podium. It would be exceptional.”

Qatar will host the final round of the FIA WTCC on November 26 and 27. On this occasion, the drivers will experience something new as one of the races will take place at night.

The Castrol Honda World Touring Car Team have since lodged an appeal in order to demonstrate its good faith. The reason for the lower ground clearance was due to an incident in race one, which caused significant damage to the Civic WTCC. As a result of the impact, the fixing point of the splitter on the front left hand side was weakened. The team carried out all necessary checks to ensure the conformity of the car to be ready for the second race.As there was not a lot of time between races, the team did an excellent job of fixing the damage and making the car as safe as possible.

“After my disqualification from yesterday’s second race in Thailand, based on our good faith and the proof we have showing that the problem happened due to contact and had no technical advantage, on the contrary!” Tiago says. “Honda decided to appeal the disqualification. We believe we have a strong case, but in tribunal you never know. Let’s keep the fingers crossed because it was a deserved win with no technical advantage whatsoever and an important one for the championships.”

The appeal will be heard at the FIA International Court of Appeal in the upcoming weeks.