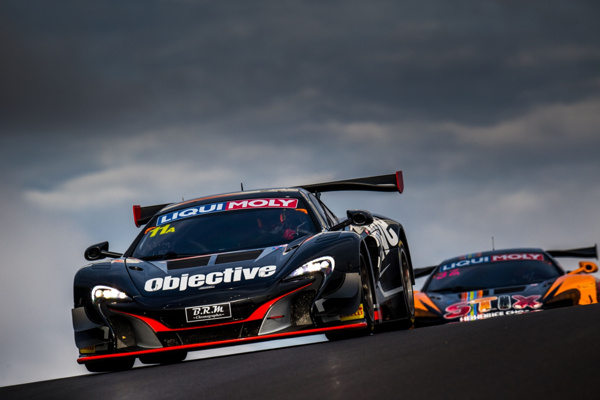 Defending Liqui-Moly Bathurst 12 Hour Champions Tekno Autosports claimed a hard-earned top five finish, and a podium in the Pro class, in the 2017 edition of the race. McLaren Factory Drivers Rob Bell, Côme Ledogar and Alvaro Parente staged a valiant never-say-die effort in the #1 650S GT3 at Mount Panorama, Australia after early setbacks left the trio at the back of the field.

The team refused to give up and was rewarded for its efforts with the strong finish, after an engine issue at the start of the second hour cost the team three laps. This came after the #1 had to start the race from the pit lane too, due to an overnight engine change following Qualifying. This left the drivers on the backfoot prior to the start of the race – a double blow after the team’s sister car was forced to withdraw from the event due to accident damage.


Bell’s strong opening drive in the early hours after the car rejoined the race set up a 10-hour fightback which culminated in the #1 650S GT3 climbing as high as P4 in the final dash to the flag. Ledogar’s closing stint in the car trailed an ironman performance by 2016 Bathurst 12 Hour winner Parente, who in-turn also benefitted from bold strategy calls by the team to move up the order.

In the end the car crossed the line just a single lap off the winner and less than a minute off the overall podium spots, proving once again the durability of the 650S GT3 as well as its raw performance over long distances.

Further down the order the #11 650S GT3 of customer team Objective Racing also made the finish of the gruelling endurance race P20 and an impressive P4 in the Pro-Am category. As with the leading Tekno Autosports car, it too suffered an early setback which resulted in it spending extended time in its pit box. Alex Davison, Warren Luff, Tim Slade and Tony Walls combined for an impressive run to the flag up against a highly-competitive and dense grid of Pro-Am GT3 runners.


Despite strong pace in the early stages and battling hard, the #37 650S GT3 of customer team Keltic Racing sustained damage while defending its position on the technical mountain section of the iconic circuit. The resulting damage forcing the team to retire from a solid top five position.