Sofia Zanfari: a girl with fire in her eyes 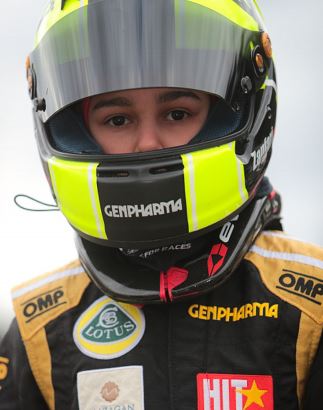 Sofia Zanfari achieved her first podium of the 2017 season at the Belgian Max Challenge in Genk, where she raced in Mini Max, learning both the circuit and the category. At 11, the young Moroccan has not finished surprising.

Karting is not, however, this dynamic girl’s only passion Her 2017 programme includes 11 European competitions that will take her from Italy to Sweden via Portugal, France, Belgium, the United Kingdom and even Austria, to learn well-known circuits. Member of the Campos Racing Academy since 2016, Sofia finds also time to practice football, karate, cycling, but she is also interested in dance and music. Eclectic, but no dilettante, she has the spirit to shine in everything she takes on.


Sofia started the karting year in the WSK Super Master Series at Castelletto before going to the home of champions at Genk (BEL) from April 21st to 23rd to participate in a round of the Belgian Max Challenge. She lined up on a Tony Kart chassis with the Lotus Racing Kart team equipped with a Rotax engine prepared by GKS.

Sofia continued to learn the track and the Minimax category in Qualifying and took 7th place on the grid for the Final stages. Her natural combativeness allowed her to take part in beautiful duels with drivers much more experienced than her. Not all of these confrontations ended as well as she could hope for, her male counterparts rarely enjoying being overtaken by a girl, but it would take more than that to discourage this fighter. Stimulated by increasingly interesting performances, Sofia redoubled her efforts and finished with an excellent 5th position in the cumulative ranking of the three Finals. Therefore she climbed to the 5th step of the podium and received a trophy as a reward for her flattering result.

Delighted by her weekend in Belgium, Sofia is proud to bring her trophy back to Morocco, where she will indulge in her many activities without restraint before taking part in the Swedish Championship in mid-July where she intends to surprise the specialists once again.