DISAPPOINTMENT IN BEIJING FOR VENTURI RACING AND VILLENEUVE 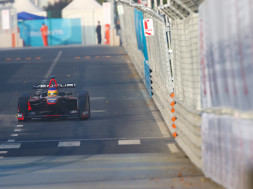 DISAPPOINTMENT IN BEIJING FOR VENTURI RACING AND VILLENEUVE

Venturi drivers Stephane Sarrazin and Jacques Villeneuve finished the first eprix of the FIA Formula-E Season 2 in Beijing China in positions 10 and 14. It was a true battle from the beginning with a lot of contact and a few collisions on Beijing’s 26 lap, 17 turn 3.439 km track, the longest of the season, situated around the iconic Olympic Stadium, The Bird Nest.

Sarrazin, the Frenchman, started in 6th position on the grid after a good qualifying round, and finished in 10th place. Sarrazin says “We’ve lost a good opportunity to score points. We could have finished in positions 4 and 6 but had an issues with the guys in the pit with a paddle to regenerate. We kept a good pace but in the end, we had too many issues. The good news is that we know the car is efficient and we had a great qualifying session – the race just hasn’t been at the same level.”

Canadian teammate Jacques Villeneuve, former Formula-1 Champion (1997) began position 12 and finished 14 after an unsteady race with a lot of gains and losses in position. “Today was difficult – we had a lot of trouble in preparation with the car and during the race the dashboard consumption was wrong, causing me to have to slow down a lot at some point to regenerate, and I fell back many positions. It’s good experience to learn from for the next race.” says Villeneuve

FIA Formula-E Round 2 will take place on November 7th in Putrajaya, Malaysia