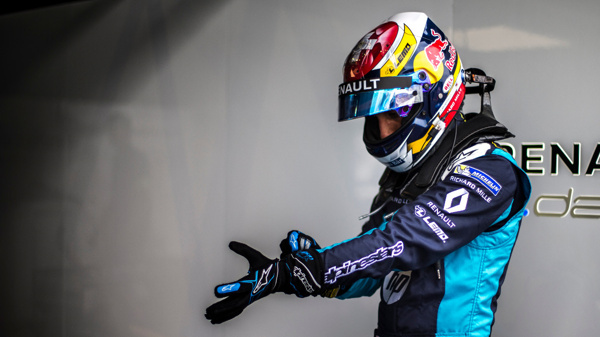 Renault e.dams, Nicolas Prost and Sébastien Buemi take to the streets of Buenos Aires this weekend for the third round of season three of the FIA Formula E Championship, the Buenos Aires ePrix on February 18.
An elongated gap has elapsed since the last race of the championship, the Marrakesh ePrix on November 12, where Séb charged from seventh on the grid to take the chequered flag and make it two wins from two starts for him and the team in season three. The defending Drivers’ champion heads to Argentina with good memories of past pace at the Puerto Madero circuit, but no visit to the top step, yet.

Nico Prost will also be hoping to go one better, after having finished in second place in the first-ever Buenos Aires ePrix in 2015, and finishing fifth last time out at the track in 2016.


Renault e.dams arrive in Argentina with 74 points in the Teams’ championship after wins in the opening ePrix in Hong Kong and Morocco were secured by Séb, who sits on 50 points in the Drivers’ standings. Nico sits in third in the standings with 24 points, just four points behind second-placed Lucas di Grassi.

This will be Formula E’s third visit to the Argentine capital, with the previous two ePrix both having taken place on the same 2.48km anticlockwise, asphalt and concrete track.

Renault is a leading brand in Argentina, deeply rooted in the country’s automotive and industrial history. With a 14.5% market share, it’s the third biggest brand in the country and has been producing vehicles at the Cordoba plant for 60 years with an output of over three million vehicles. Renault Argentina is the second biggest market in terms of sales of RS cars in the world with the Mégane III RS, Fluence GT and Sandero RS. The Kangoo Z.E. and Twizy from Renault’s electric range are planned for launch in Argentina later this year and both vehicles are under local evaluation as part of this weekend’s ePrix.

Team quotes
Jean-Paul Driot, Senior Team Manager
We have always been strong in Buenos Aires with good results, even when Séb had to start from the back of the grid last year. I hope our good form continues in Argentina this season. Nico finished second here in season one, Séb finished second last time out. Maybe it will be third time lucky for the win this season! Since Morocco we have stripped the cars down, analysed all the data very deeply to see where there is room for improvement so we are as prepared as we can be. We always receive a fabulous welcome in Buenos Aires and we hope to put on a fantastic show for all the fans.

Alain Prost, Senior Team Manager:
It’s been a long gap in the season since we were in Marrakesh, so we will be focused on hitting the ground running in Buenos Aires. Formula E has visited the same circuit twice before, so there’s good familiarity for the team, Nico and Séb. Our targets are, as ever, to get the best results possible. We started our campaign strongly, but we know our opposition will not have been resting since Morocco so we don’t know exactly what challenge we will face. My first Formula 1 Grand Prix was in Argentina, so it is a country of great memories for me as I also scored my first world championship point there in that race.


Vincent Gaillardot, Renault Sport Project Leader
We know the track in Argentina well as this will be our third visit. We expect the climate will be hot, and the temperatures mean we will have to manage the battery temperature very carefully – especially if it’s around the 40°C it was last year. We hope we can show as strong a performance as we did in season two, however we all know that the competition has been particularly close this year so we will have to optimise all aspects to ensure the maximum performance. Our familiarity with the circuit means our approach to the weekend can be slightly different, as we have far more precise data when we start the weekend. This means we can be far more efficient in our approach to the first practice session as we optimise the calibration of the systems. Since Marrakesh our work has been focused on the optimisation of all the systems, calibrations and set-up. We’ve scrutinised all the data from the first two events to ensure we are making the most of every area of the car’s performance potential. We know our opposition will have been doing the same, however the characteristics and overall layout should suit the Z.E.16 well.

Sébastien Buemi
I’ve always been very competitive in Buenos Aires, however I’ve never translated it into the win, so I’m hoping to make that happen this year. In our first visit, I started from pole position and was leading the race until near the end when I hit the wall. Last year I had the best sectors in qualifying but spun in the last corner, meaning I had to start the race from the back of the grid and fight back through the field to finish in second place. Hopefully this time I will be able to nail it for both qualifying and the race! It’s a special circuit because you have two long straights and the highest top speed of the year. It’s not easy to save energy with the straights, however they do give you great opportunities to overtake – fighting back from the back last year showed what is possible. Overall, it’s an amazing city, the weather’s good, the fans are great and it’s a special circuit; what’s not to like?

Nico Prost
I like the Puerto Madero circuit as it’s one of the best we visit in Formula E. It has good straights and you can push more than you can on some of the other tracks so it’s quite satisfying as a driver. I finished second here in the first season so I have good memories of that. It’s been a while since we last raced, but I know what has to be done. I lost out a bit in qualifying in Morocco, so will be looking to put that right in Buenos Aires. The race will be hard with the heat but we prepared for that. I’m hopeful of a strong result for me and the team this weekend.

“The interesting thing is that there isn’t that much difference for you as a driver at the end of the day. One aspect that people always recognise is the different noise, however the behaviour of the car, its speed and how it reacts is pretty much in line with an internal combustion powered car. When I come to an ePrix, I don’t think ‘this is something completely different’, I approach it just as I would any other race.

“Certainly, when you are in an ePrix, you are racing for position, you are ensuring that you take the correct line through the corners, you are working to your strategy. It is true that you are monitoring and managing your energy consumption in an ePrix, but in another race you’d be managing your fuel consumption and tyre performance, so there is no fundamental difference.

“The great aspect of racing electric is that we’re pushing developments which are highly relevant for road vehicles. We’re making rapid progress and the technology here is very relevant to the cars which are on sale and soon will be on sale.

“We’ve seen improvements in Formula E regarding power and efficiency so as a driver you really feel that you are linked to something big for the future. Everything that the manufacturers do and learn here has relevance and can be translated into road cars like the ZOE. There are more aspects which are relevant for the road than you see in other championships like Formula 1, for example.

“The wings you develop for a Formula 1 car have no relevance for the road, but the efficiency gains you make in Formula E do have relevance for electric vehicles on the road!

“The Z.E.16 is a great car to race and it is fantastic to be able to race it in so many cities so people can really get to understand the potential and benefits of electric cars. I’m proud to be part of it.“