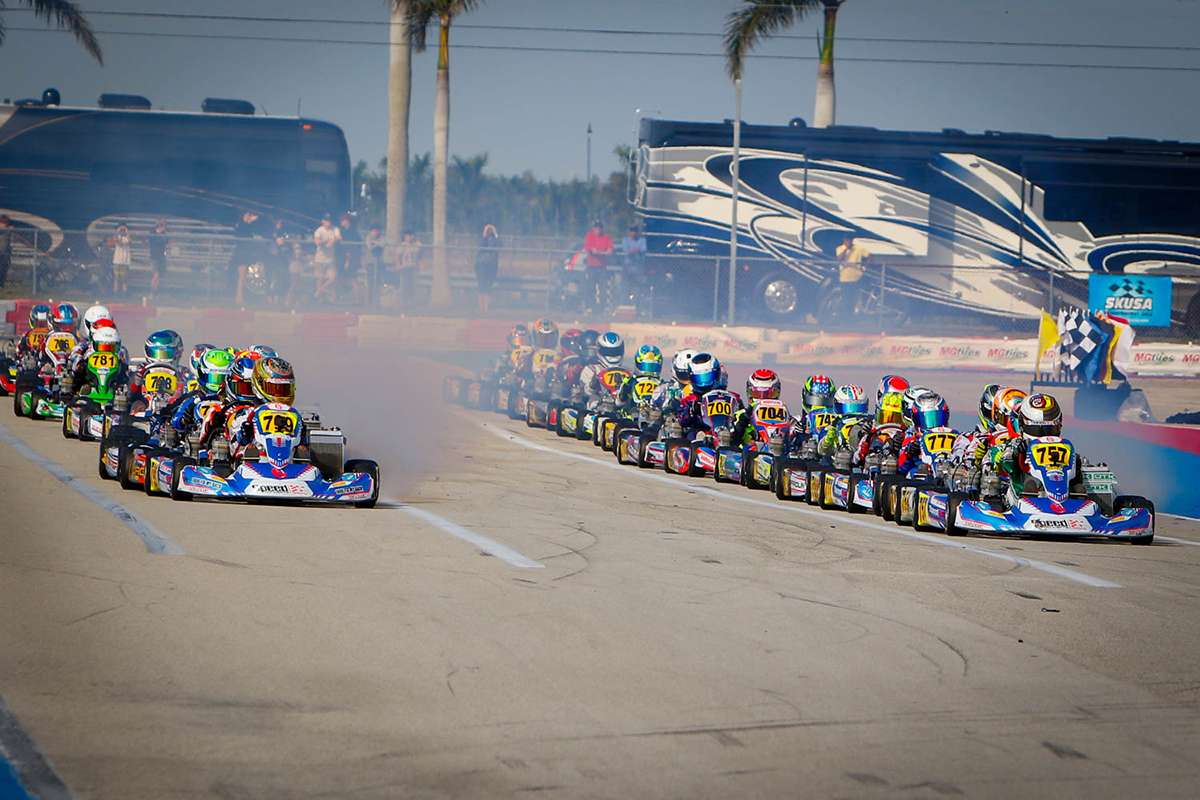 Three SCR drivers finish in the top-ten in X30 Junior

Just as they did at the final event of 2017, Speed Concepts Racing was victorious at the opening round of their 2018 season. Competing at the inaugural Superkarts! USA (SKUSA) Winter Series at the AMR Homestead-Miami Motorplex in Homestead, Florida, Arias Deukmedjian scored the X30 Junior win on Saturday while Tyler Gonzalez claimed a pair of podiums over the two days of competition and leaves the event as the point leader.

“It was a great way to welcome Arias to the team,” explained Speed Concepts Racing Owner Mike Speed. “Arias was very fast last weekend in our team test as well as on Saturday but was the victim of a first lap incident in the final. Sunday he drove a very good race and was able to take the checkers and add to the Speed Concepts Racing results resume.”

After completing the official practice day on Friday, wheel-to-wheel action commenced on Saturday with Gonzalez and Deukmedjian claiming the third and fourth quickest laps in the X30 Junior qualifying session. Junior rookie Kyffin Simpson would close his session in 14th while SCR newcomer Justin Arseneau would be classified in 22nd. In the prefinal, Gonzalez would hold station to finish third while Deukmedjian would fall back one spot to fifth, but have the preferred inside row starting position for the main event. Simpson would race hard but fall back to 20th while Arseneau would be involved in an incident but soldier on to finish 34th.

In the main event, Gonzalez, in his Speed Concepts Racing Tony Kart would take the point early and lead several laps. With the goal of a victory, Gonzalez would fall one position short as he crossed the stripe in the second position, adding another podium to his growing total. Deukmedjian would be involved in a first lap incident and fall to 40th, but a spirited drive throughout the complete race distance would see him drive all the way back to 21st. Arseneau continued his improvement as he netted a 19th place result while Simpson was forced to the sidelines due to contact.

Sunday would see a much better qualifying effort amongst the Junior drivers as Deukmedjian would be third, Gonzalez fifth, Simpson eighth and Arseneau in 15th. Gonzalez would go on to take the prefinal win ahead of Deukmedjian who made it a Speed Concepts Racing 1-2. Simpson would come home ninth and start the main event in the top ten while Arseneau would have some more bad racing luck and fall back to 25th.

In the day’s main event it was all Arias Deukmedjian as he took the lead early. Putting a stamp of approval on the weekend, Deukmedjian proved that Saturday’s speed was no fluke as he scored his first SKUSA Winter Series victory. Gonzalez would add his second podium result of the weekend in the third position to leave the event with the series points lead. Simpson would have a tremendous outing improving with each passing lap to come home seventh with Arseneau advancing forward six positions to finish 19th.

In the IAME Mini Swift class, Speed Concepts Racing would enter Noah Baker, Paul Bocuse and Alex Powell in the fifty kart strong field. Saturday’s qualifying would go extremely well as all three drivers would be in the top-ten with Baker leading the way in fourth, Powell sixth and Bocuse in ninth. Unfortunately, the good luck in qualifying would turn to bad luck in the prefinal as all three would be involved in on track incidents and be classified well down the running order.

With the hopes to improve in the main event, all three drivers would gain positions with Powell advancing 24 places to finish 11th. Noah Baker would pass 19 karts to end his day in 26th while Paul Bocuse drove forward 11 positions close his main event in 31st.

Back to the track on Sunday, Powell would lead the trio of drivers in qualifying with speed to claim the fourth quickest lap of the session while Baker would put two SCR drivers in the top-ten with an eighth place effort. Bocuse would be involved in an incident that would hinder him from turning a quicker lap, relegating him back to the 22nd position. Both Baker and Bocuse would improve their positions in the prefinal ending the session fifth and 19th respectively, with Powell forced to retire ending his prefinal in 43rd.

In the main event, Baker would fight hard throughout the top half of the field to end his weekend in 11th while Powell would gain thirty positions in the main event to take the checkers in 13th with Paul Bocuse classified in 21st.

With no time off, Speed Concepts Racing will travel to the Palm Beach Karting facility in Jupiter, Florida for the opening round of the ROK Cup Promotions Florida Winter Tour. Stay tuned for a driver lineup media release coming soon.