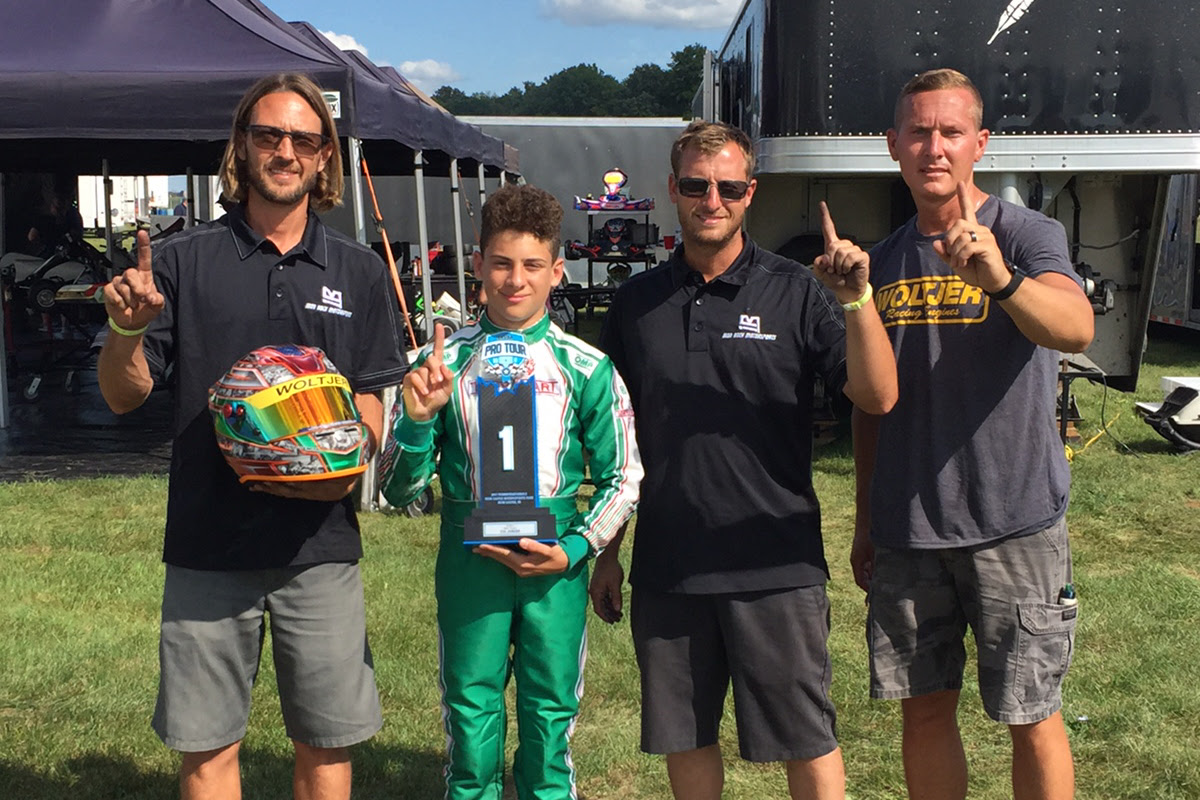 Scoring the double victory back in 2016 at the SuperKarts! USA (SKUSA) Pro Tour event at New Castle Motorsports Park, Tony Kart driver Dylan Tavella was looking to repeat his success at the 2017 edition. With a championship on the line and more than forty other talented drivers in the X30 Junior class, Tavella started the weekend off well and turned that speed into a race win, and eventual championship clinching performance in Saturday’smain event.
“I did not even know that the championship had been clinched,” explained Tavella before finding out at the track upon his arrival Sunday morning. “I wanted to win the race and knew that everything would fall into place if I just drove my heart out and gave 100% effort.”
Saturday was a near perfect day for the New York resident as he put his Iron Rock Raceway Tony Kart on the pole position in Saturday morning qualifying. With the only blunder a second place result in the prefinal, Tavella drove a near perfect final swapping the top position with a fellow competitor on a few occasions, before cementing his victory by claiming the checkered flag.
Sunday would prove to be a difficult day for the newly named champion. A second place run in qualifying set up a top-five result in the prefinal. An incident in the opening laps of the main event relegated Tavella down the running order and near the tail of the field. With a damaged kart and a never give up attitude, Tavella soldiered on to march his way back forward and claim a 17th place finish.
With the SuperKarts! USA Pro Tour now complete, Dylan Tavella has been crowned the X30 Junior National Champion. Carrying the National #1 plate to the SKUSA SuperNationals in Las Vegas in November, Tavella will also represent Team USA at the IAME World Finals later this year, where he will look to represent his country with pride and a great performance against some of the world’s best.
Dylan and the Tavella family would like to give a special thanks to Luis Martinez , Chris Perez and Caleb Loniewski for all the hard work it takes to win a Championship. The Woltjer family for having the passion to build the power plate needed to win a Championship and Charlie Swayne for constantly striving for excellence in Dylan’s ability. To win a Championship at this level in the United States it takes one thing, “TEAMWORK”.
For more information on Dylan Tavella including news, profile, media and contact information, please visit him online at www.DylanTavella.com.
tags: Dylan Tavella SKUSA x30
previous STRONG RESULTS FOR SPEED CONCEPTS RACING AT SKUSA PRO TOUR
next ROOKIE JAK CRAWFORD SECURES SKUSA JUNIOR VICE CHAMPIONSHIP