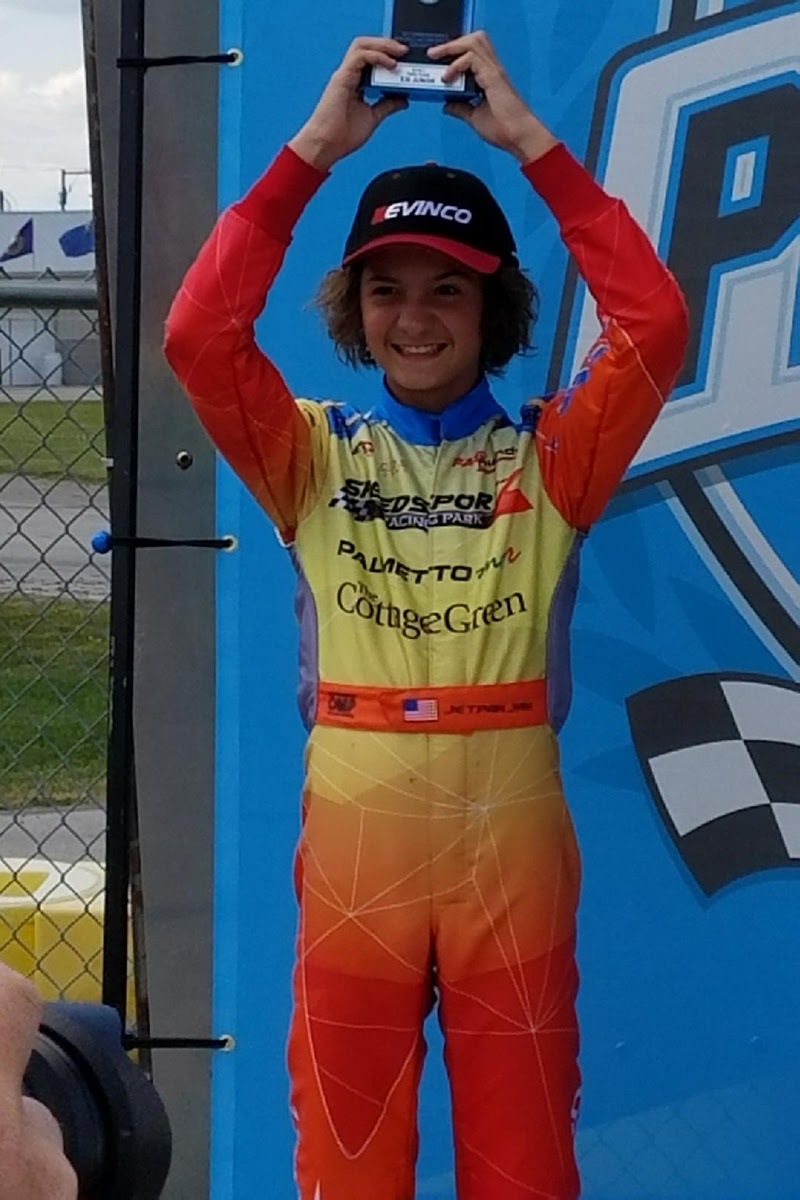 Traveling from his Texas home to the Midwest, Jetpak Jak Crawford would get back behind the wheel of his OTK chassis at the fast and high grip New Castle Motorsports Park facility. Taking part in the annual SuperKarts! USA (SKUSA) SummerNationals, Crawford turned Saturday’s bad racing luck into success on Sundaytaking home a third place podium result.
“Saturday was one of the unluckiest days I have had in karting,” explained Crawford. “I had a fast kart but could not put together the proper draft lap for qualifying and would end up inside row three. The prefinal was a little difficult but finishing in the seventh position, I knew I would have a chance to fight for the win.”
And fight for the win he did. After jumping into the top-five in the early stages and setting the fastest lap of the race, Crawford would eventually work his way to the pointy end of the field and take the lead just past the halfway mark. In fierce battle for the lead amongst five of the top junior drivers in the country, disaster would strike Crawford from second position as an internal part failure in his IAME X30 engine would force the young Texan to the sidelines with less than three laps remaining. Heartbroken as he watched his competitors stream by and race for the win, the situation provided motivation for Crawford as he took it all in stride.
Back to the track on Sunday and determined to close out the 2017 SKUSA Pro Tour out on a high note, the Precision Works Racing Engines powered Nash Motorsportz driver turned up the wick in the morning qualifying session. Securing the pole position on his last flying lap, the Texas based racer would line up on the inside of the front row for the start of the day’s prefinal.
Progressing through the heat race with a third place result, Crawford would remain station in the main event. After battling with the leaders in the opening stages and falling back to fifth early and narrowly avoiding a crash, the likable 12-year-old would lose the top two drivers by two seconds.  By the final lap he would catch the leaders and narrowly missed winning the day by a scant one tenth of a second, instead claiming the checkered flag in the third position.
On the strength of his results earlier in the 2017 Pro Tour and capped off by his podium result on Sunday, Jak Crawford was named the X30 Junior Vice Champion in his rookie season.
While Jak will take part in several car events in the very near future, his next karting event will be the Rotax Max Challenge Grand Finals in Portimao, Portugal. As a member of Team USA, Crawford will look to make his country proud over the week of November 4-11, 2017, then on to SKSUSA Supernationals in Las Vegas the following week.
Jetpak Jak would like to thank Nash Motorsportz, Precision Works Racing Engines, OMP for the racing gear, and all the other family sponsors who make racing at this level possible.
tags: JAK CRAWFORD SKUSA x30
previous DYLAN TAVELLA IS THE SUPERKARTS! USA X30 JUNIOR CHAMPION
next THURSDAY SCHEDULE CHANGE FOR ATLANTA ROAD RACE