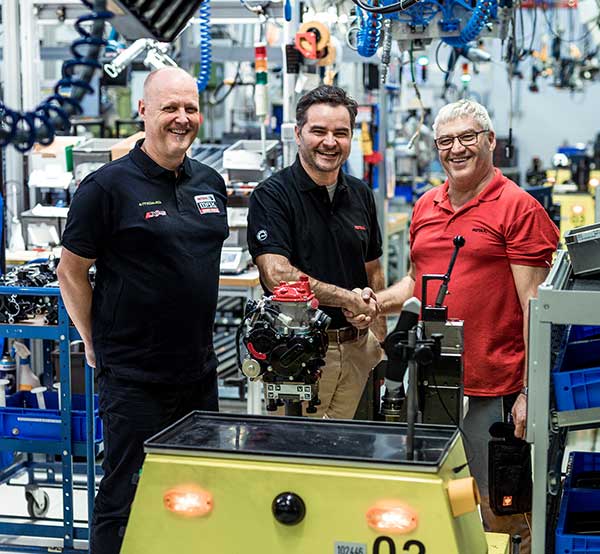 The 100,000th Rotax MAX 125 kart engine left the assembly line at BRP-Rotax in Gunskirchen, Austria, at the start of February.

“When we launched the Rotax 125 MAX karting engine in 1997, we launched a new engine concept based on our extensive experience of 2-stroke technology for recreational applications” said Peter Oelsinger, vice-president Rotax Propulsion Systems and Finance.

(L to R) Helmut Voglsam, Stefan Gruber and Johann Hosner who was working at the kart assembly line when the first Rotax MAX engine was produced and also when the 100,000th left the assembly line.

“Using the Rotax 125 MAX engine allowed the driver to spend more time on the track and less time in the pits.”

Compared to existing engines of the time, the MAX offered durability and easier use with an onboard electric starter in combination with centrifugal clutch, plus a carburetor with fixed jets.

The rapidly increasing engine sales confirmed the new engine concept met the requirements of the market and attracted many new drivers to the sport.

Rotax has 43 authorized distributors and a worldwide network of more than 700 authorized service centres and dealers.