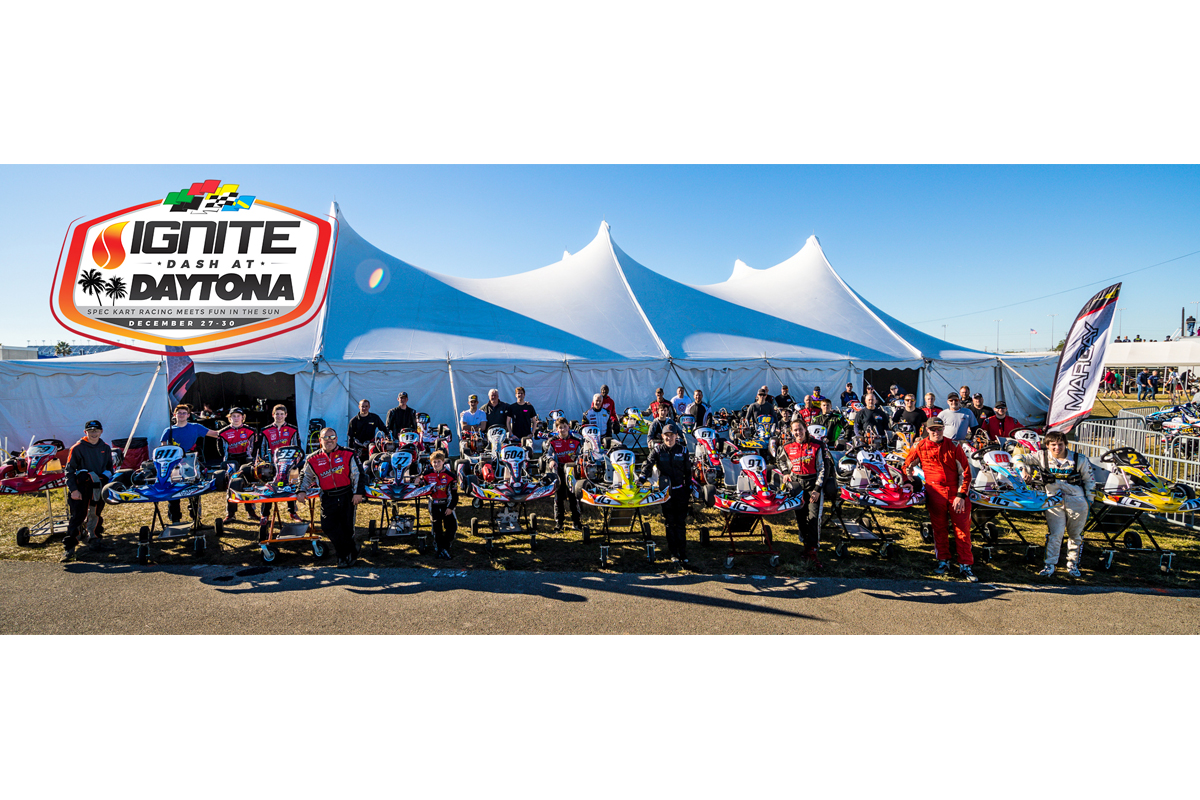 This year’s inaugural Margay Ignite Dash at Daytona at WKA’s Daytona KartWeek saw 33 Briggs & Stratton 206 powered Ignite K3s take the track over the three-day event. The Ignite Senior class proved to be a true driver’s class with a heavy mix of competitors throughout the front of the field. Up front we saw a mix of new karts and old karts, National champions and Daytona newcomers along with youth and experience.

The teams arrived at the track to extremely damp conditions with an ongoing mist that didn’t subside until around 10am. Drivers elected to skip the morning warm-up session which would only allow drivers 8 minutes in qualifying to quickly adapt to the track conditions. With Ignite Senior being last in the run order, classes were slowly merging from rains to slicks. By the time the drivers hit the track, only the direct racing line was in the dry. Gabby Chaves showed his karting experience in the rain to put his #88 Ignite K3 on pole by 0.130 seconds over Daytona veteran, Jeff Jewell.

In the pre-final, Jewell would get shuffled back to fourth place right away as Charlotte Lalonde and Chaves would work together to split the pack. With 4 laps to go, the pair of Zach Veach and Jeff Jewell would close back in. On the back-stretch of the last lap, Lalonde made the inside pass to secure the lead. Chaves tried the over-under, only to find a nose on the inside heading down the front-stretch. With Veach and Jewell close behind, Chaves and Lalonde hooked bumpers which allowed Veach to take the second position at the line creating a 4-wide finish.

This set Lalonde and Veach to the front row for the Ignite Senior final. On the start, Jordan Bernloehr took the lead while Chaves dropped back to 11th place. Coming into the turn 1 on lap 2, Veach made an inside pass securing the top spot with Lalonde following behind. Veach and Lalonde would work together to attempt to gap the field while Bernloehr maintained his gap on the lead pack. On the last lap, Lalonde had Veach setup identical to Chaves in the pre-final. Lalonde was not able to get a good run heading onto the backstretch on the final lap which allowed Zach Veach to take his first ever WKA Manufacture’s Cup win. Jordan Bernloehr would finish third with Gabby Chaves fighting his way back to fourth place.

After the race Veach stated, “I knew with two to go I had to do everything I could possibly do to keep Charlotte behind me. It was an awesome run, I’ve never had so much fun behind the wheel”.

In qualifying for the second race event, Charlotte Lalonde would take the pole on her final lap, edging Zach Veach by 0.087 seconds. In the pre-final, Veach would unfortunately lose a chain after being involved in a first lap incident, immediately sending him to the back of the pack. This would leave Chaves and Lalonde to fight it out to the end. Chaves would take the pre-final win with Lalonde, Bernloehr and Gage Rucker close behind.

In the final, Lalonde would make contact with another kart on the start sending her through the grass into turn one, allowing Chaves and Bernloehr to break away from the pack. A close battle for third emerged between Justin Vancil, Jordan Missig and Gage Rucker throughout the duration of the race. Rucker would make a three-wide pass over Vancil and Missig to take the third-place position, only to hold it for a lap before Vancil could regain the spot. In the closing laps, Bernloehr would edge closer and closer to Chaves, eventually getting to his rear bumper only for lap traffic to split the top two positions coming to the checkered. Chaves would take the win at Daytona making it an “IndyCar Sweep” for the weekend.

After the race Gabby stated, “The competition was so close all weekend, we all had a blast and we can’t wait to do it again”.

Stay tuned for Margay Racing’s 2018 Arrive & Drive schedule to be released later this month. To reserve your factory-prepared kart or make arrangements to race your own Ignite in one of our future events please visit www.margay.com or call (800) 562-7429.