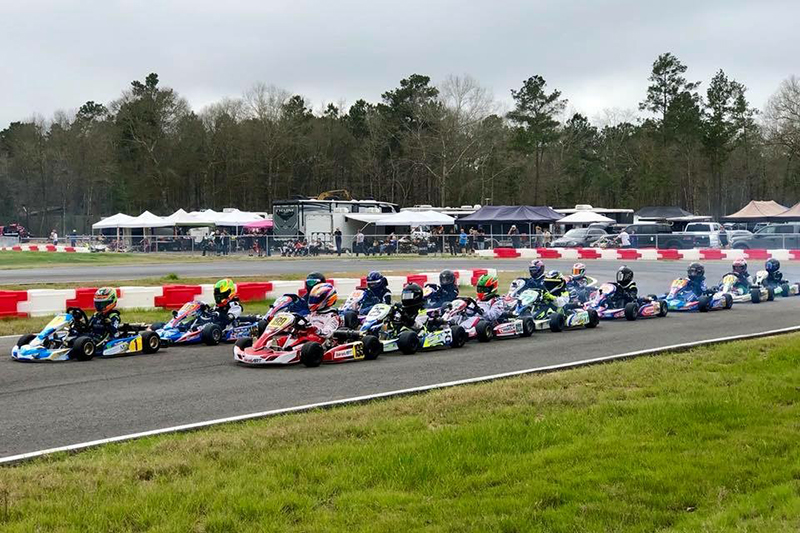 The first race of the 2018 Texas Sprint Racing Series (TSRS) was on February 17-18 at Speedsportz in Houston, Texas. The series built upon the 2017 season that saw some of the best regional competition for Texas, Louisiana and Oklahoma. The series includes both 2-cycle and 4-cycle classes.

The TSRS saw their biggest fields ever with almost 100 competitors. Speedsportz provided a wonderful experience with top-notch facilities and excellent support for the needs of the racers.

The weather was forecast to be sketchy, but while Saturday saw wild swings from overcast drizzle to sunny and hot, the race surface never disappointed. Amazing battles were fought in the finals on Sunday. TSRS is also happy to report there were no significant injuries throughout the weekend.

206 Junior was all Jesse Mitchell from qualifying to the final. Macon Moore and Braxden Tregre rounded out the top-three.

The 206 Light final was sure to be exciting with fifteen drivers hitting the track for a twenty-lap race. Brett Mitchell jumped out to the early lead while Barry Peel worked his way into second. Brandin Warwas hooked on the back of Peel’s bumper and arrived at Mitchell’s rear bumper with four laps to go. Peel went by Mitchell, but Mitchell didn’t stand for that and passed right back. Barry then tried to go back by and didn’t complete the pass, allowing Warwas to pass for second. After the checked flag flew, Brett Mitchell won, Brandin Warwas was second, and Barry Peel finished in third.

The 206 Masters had a solid field of eleven. DJ Ortiz showed he was the man to beat in the final after a close battle with Miguel Mier. After eighteen long laps it was Ortiz, Mier and Tommy Sutton on the podium.

Micro Swift had a new talent show the pace all weekend. Ivanna Richared never missed a beat in qualifying, through all the heats and took the main victory by eight seconds. The real battle was for second and third between Ethan Thomason and Ragan Saville. The two would go back and forth multiple times and Thomason would make the pass stick and while Saville would have to settle for third.

The Mini Swift class had plenty of talent in the fifteen-kart field. The three heats showed different winners including Aden Rudolph and Chase Gardner. After a crazy start, it was all Chase Gardner as he got the jump while Alex Stanfield would get in line in second. Hailey Taylor jumped into third and had a tight battle with Santiago Duran. After the long 18-lap final, Chase Gardner went on to win, Alex Stanfield crossed in second and Santiago Duran won the battle for third.

The X30 Juniors had a great battle between Andres Perez De Lara and Jett Morton. The two would go to battle in all three heats. The final showed the same two, but Branyon Tiner would bring Ryan Shehan to the front to make it four karts battling for the top spot. After the halfway point, the duo of Andres and Jett would breakaway and leaving Tiner and Shehan to battle for third. Andres Perez De Lara got the win, with Jett Morton second and Tiner winning the battle for third.

The X30 Senior class had action in all the heats so it was apparent the final was going to be a good one. Tyler Orum jumped out to an early lead and the battle behind him heated up allowing Orum to pull away. After John Berry got into second, Berry started chipping away the lead and would eventually catch up. On the final lap, Berry made the pass on Orum and would be a rewarded the victory. Tyler Orum settled for second, and Kaden Grey, after battling with Berry, took home third.