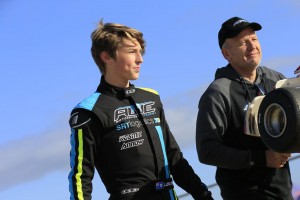 The Tasmanian-based team will field seven drivers across a variety of classes in the five-round Championship that begins in South Australia on February 23-25.

Reigning KA4 Australian Champion Jay Hanson is a major inclusion in the outfit as he makes the progression into the elite junior Class – KA2. Hanson will be joined on the KA2 grid by rising Tasmanian junior Callum Bishop.

After showing some good speed in 2017, Lachlan Dalton who has moved into the KA1 ranks as he progresses to the Senior division using the Vortex DVS engine.

Fresh from securing his maiden State Championship last November, Alastair Lee will line up in the TaG 125 Class. Lee was the benchmark in his Class throughout Tasmania in 2017 and is excited about the Challenge of competing against Australia’s best under the AWC Motorsport Academy banner in 2018.

Dean O’Brien joined the team towards the end of 2017 and along with his father Jimmy has fitted in to the team straight away. A strong showing at Emerald last year and a win at The City of Melbourne Titles will provide him with confidence well for a successful tilt at the Championship in 2018.

Fletcher Bellars will return back for his second year at AKC level and is looking to build on the experience he gained last year.

Rounding out the line-up will be Tasmanian Veteran Zane Wyatt in the KZ2 Class. The multiple-time Tasmanian Champion has been a consistent performer at the top level of the sport for several years now and he will once again tackle the toughest challenge in Australian karting in the elite KZ2 class.