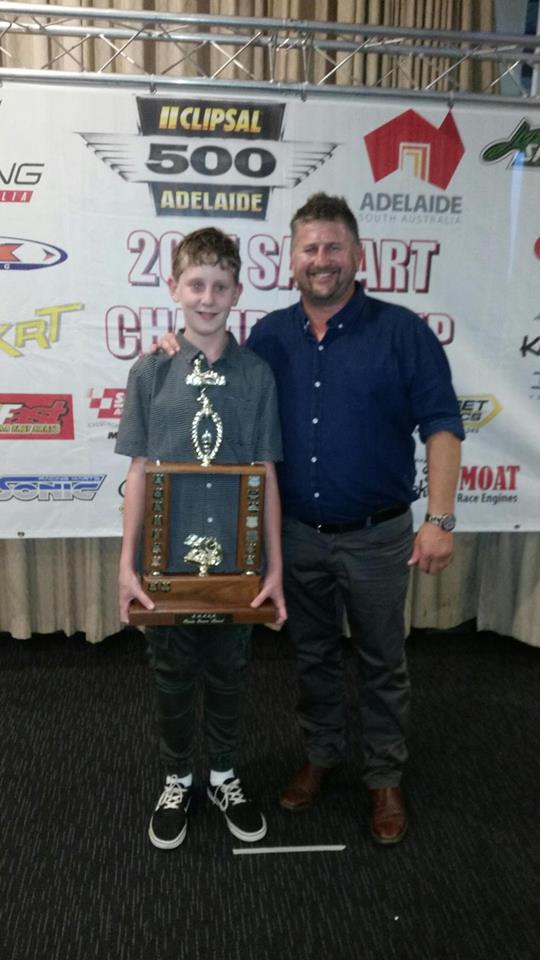 This is a perpetual trophy that is awarded to a South Australian driver who has shown excellent sportsmanship, great commitment and continual improvement throughout the season. Kevin Jenner was a long-term identity of Australian karting, including President of the Australian Karting Association.

It is the first time the award has gone to a country based young driver and shows how well respected Brayden is among the Karting community.

Brayden has been racing karts for five years. The first three years were at club level but the last two he has travelled to numerous title and other events throughout the State.

He has scored many podium finishes, taking away trophies and prizes, but best of all he has improved his karting skills and knowledge through racing against some of the best young drivers in Australia.

2017 was a stellar year for Brayden, who finished 3rd in the Cadet 12 class in the SA State Series which was fought throughout the year over three rounds at different circuits in and around Adelaide.

“The Whyalla Kart club and greater karting community look forward to watching Brayden in the future as he takes on the challenges of the Junior category” Karting South Australia published on social media.

“He will be competing in the highest level of Karting next year at the five-round National series. All except the Adelaide round will be held interstate as far as Emerald in Queensland. The racing will be extremely tough with the best Karters from around the country attending these meetings. With fields of 40 karts per race, everything will need to be right for him to do well. Goodluck.”