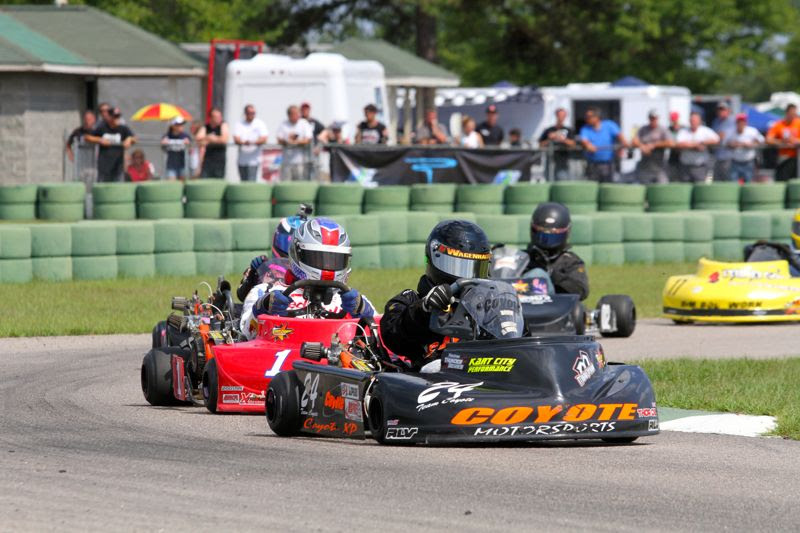 With the 2015 karting season nearing its completion, Coyote Motorsports is proud to announce coast-to-coast success for its chassis and customers with one of the highlights the Constructors Championship in the Briggs & Stratton 206 Cup.

Billed as “the fastest growing 4-cycle karting series in America,” the 206 Cup featured six divisions for Briggs’ LO206 and Animal engines and the series held four big weekends of racing at sprint tracks in Wisconsin and Illinois between June and September.

Jason Pribyl won four of the eight features on his way to the 206 Sportsman championship; Justin Wishard drove his 2015 Wide Track to two wins en route to the 206 Junior title; and Regan Vehring drove his Coyote to one win and the Animal Senior division championship.

Coyote racers swept the top-three positions in Animal Senior with Robert Murray (four wins) and Travis Sabatka (one win) finished second and third behind Vehring in the final points.

Coyote drivers owned the top-two positions in 206 Junior, as well. While Wishard won the class, longtime Coyote pilot Cole Pechang scored four wins on the season, including the final three rounds, and came home second in the points. Pechang likely would have challenged Wishard for the championship but he missed the second weekend of the series at Eau Claire, Wis.

The 206 Cup boasted terrific fields in the fast growing 206 Senior division. Over 20 karts started each of the eight rounds in the class in 2015 with nearly 30 attending the opening weekend of the series at the Badger Kart Club in Dousman, Wis.

Wisconsin racer Dylan North carried the Coyote banner high in the hotly contensted 206 Senior division. North finished third in the final points of nearly 50 entrants, and he scored two feature wins. North captured the win over 22 competitors at round five at Concept Haulers Motor Speedway (Norway, Ill.), and backed it up with a big win over 24 competitors at the series’ final round in September at Shawanno, Wis.

Daniel Seaman finished eighth in the final 206 Senior points on a Coyote, while Robert Murray only ran a couple events but did capture a strong second-place finish on a Coyote in the series’ opening race at Dousman.

206 Sportsman champion Jason Pribyl not only captured one class championship, but he jump-started his 2016 campaign in the Junior division by moving up to the 206 Junior class on the final day of competition at Shawanno. After wrapping up the Sportsman championship on Saturday, Pribyl ran Junior on Sunday and promptly scored a podium finish, coming home second to fellow Coyote pilot Cole Pechang.

Congratulations to all our racers who competed in the Briggs 206 Cup and “thank you” from Coyote Motorsports for helping us win the Constructors Championship. We always appreciate your support and help in making our line of chassis the best it can possibly be!

Michael Busse wins LO206 Senior championship at New Castle
Another example of the LO206 engine platform’s growth is evidenced at Indiana’s New Castle Motorsports Park, where the Kart Racers of America (KRA) series continues as one of the strongest of its kind in the country.

The LO206/Clone divisions – one for CIK karts and one open to CIK and Gold Cup-style setups – are two of the largest divisions in the club.

Coyote Motorsports is proud to report that Michael Busse, who rides a Wide Track CIK package, scored the LO206-Clone Senior KRA class championship over more than 30 competitors. Busse won four features and never finished worse than third place on his way to the class championship over defending champion Steve Knight. Busse was fast week in and week out on his Kart City Performance-powered Wide Track, and it’s great to see him score the championship in a very competitive division.

We offer our congratulations to Michael Busse and all the Coyote customers competing at New Castle! Club racing is what karting is all about, and it’s great to see such a healthy club at New Castle.

Winning on the west coast
We’re excited to see our Coyote chassis gaining momentum as far west as the Pacific Northwest region.

A prime example of this is Jerrett Cangie’s success in the LO206 divisions at Pacific Grand Prix (PGP) Motorsports Park near Seattle.

Riding his Coyote Wide Track with the CIK package, Cangie has been one of the hottest 4-cycle racers in the region in recent years. This season, Cangie kicked off the year winning the LO206 Light race over a dozen competitors in June at PGP.

Congrats to Jerrett and be sure to let us know if you’re having similar success on your Coyote!

East coast success
Throughout the year, Coyote chassis could be found in the winners circle up and down the East Coast and as far west as the Seattle, Wash., area. Many of these wins have come on the popular Coyote Wide Track CIK package with the rapidly growing Briggs & Stratton LO206 engine.

On the East Coast, Coyote racers scored eight feature wins on the season in the World Karting Association Gold Cup Series. The most recent accomplishment in Gold Cup was Sean Meier’s sweep of the two Senior Pro Gas Animal features at the Grand Nationals at Barnesville, Ga., in September. Meier drove a newly designed 2016 Wide Track chassis to the wins.

Meier opened 2015 with big success in the Florida Pro Kart Series. Meier led a top-three sweep in LO206 at the Palm Beach Kart Center. Meier dominated the weekend and in the Saturday round at Palm Beach, Meier won over Coyote team drivers Patrick O’Neal and Jim Lipari in a sweep of the podium.

Another highlight on the east coast was Ben Wagenhals winning over 20 entrants in LO206 Heavy in the second round of the WKA Gold Cup Series in June at Carolina Motorsports Park. Wagenhals drove a Coyote XP chassis to the big win, which included a sweep of the day’s competition with the Pole Award and heat-race victory. Wagenhals returned the next day at the Carolina Motorsports Park Nationals to finish third after winning another Pole Award and heat race win.