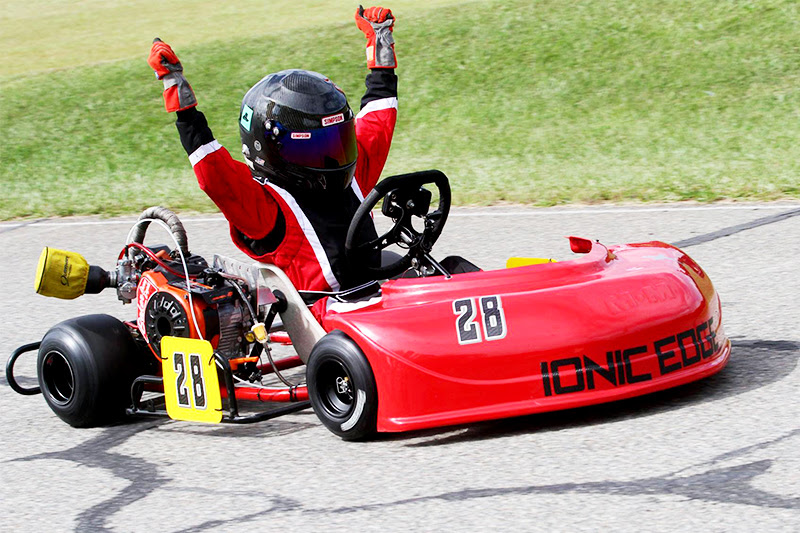 0
0   0
Kyle Luttrell’s IONIC Edge Chassis had a big weekend in Southeast regional series racing.
IONIC Edge racers collected wins at the Carolina Karting Challenge two-day event at Carolina Motorsports Park and the South Eastern Karting Alliance (SEKA) event at Twin Fountains Raceway in Tennessee.
At Twin Fountains, Elijah Skaggs, Matt Skaggs and Mike Curran all had solid days on Saturday. Elijah competed in the LO206 Junior Pro division and led every lap of the feature race, setting a new track record for the division in the process. Elijah also finished second in the division’s heat race.
Mike Curran and Matt Skaggs both finished second in their LO206 Senior classes. Curran drove from 14th to 2nd in LO206 Spec while Skaggs advanced from 9th to 2nd in the competitive LO206 Senior main event. Skaggs’ second-place effort clinched the LO206 Senior SEKA points championship and the Briggs Weekly Racing Series East Region title.
About six hours east of Twin Fountains Raceway Aiden Baker Crouse was riding his IONIC Edge to a pair of wins at the Carolina Karting Challenge, the popular club series at the Carolina Motorsports Park 0.7-mile kart track.
Crouse drove his IONIC Edge to wins both Saturday and Sunday in the LO206 Cadet division, which had a good field of 10 karts both days. On Saturday, Crouse raced to a 5.4-second win in the 10-lap main event. He also won the 8-lap heat race and qualified on pole at a 56.978.
Crouse backed up his Saturday sweep with another pole position and feature win on Sunday. After finishing third in hotly contested heat race, Crouse dominated the 10-lap feature, crossing the finish line nearly 8 seconds ahead of his closest competitor.
“We’re really pleased with the performance of the Edge’s this past weekend,” Kyle Luttrell said. “Both events had good participation, which is great to see for regional, grassroots karting. Aiden did an awesome job at Kershaw, winning all but one round of competition throughout the weekend. And Elijah Skaggs had a terrific day at Twin Fountains. Matt Skaggs wrapped up his championship and Mike Curran had a good day. It was a good weekend for us.”
Next up for many IONIC Edge drivers is the big Music City Grand Prix Saturday, November 14 at the five-eighths-mile sprint course at the Nashville Fairgrounds. The event is the final SEKA race of the 2015 season and SEKA officials are expecting over 100 entries and one of their biggest fields ever. The most popular divisions are the Briggs LO206 classes with over 20 entries expected in LO206 Spec and LO206 Senior.
For more information on the Music City Grand Prix, contact Matt Skaggs at 615-390-9433.
If you’re interested in learning more about Ionic Edge Chassis, contact Kyle Luttrell at 404-516-8934, email kyle@luttrellracing.com  and visit the team’s website at IonicEdgeChassis.com.
——————–
Ionic Edge Chassis is a go-kart chassis manufacturer based in White, Georgia. Owned by Kyle Luttrell, Ionic Edge builds chassis for sprint, road racing and oval-track applications.
From the team’s official website: “Our goal at Luttrell Racing is not to sell the most karts to the most people, but rather to sell you a kart that fits you and your needs. We make sure the kart is built especially for you, from the powder coat color to the perfect seat. Our ultimate goal is to make sure each of our customers is 100% satisfied with their final product.”
tags: IONIC EDGE
previous 2016 AKRA SERIES TO KICK OFF WITH DOUBLEHEADER MARCH 18-20 AT CAROLINA MOTORSPORTS PARK
next COYOTE WINS BRIGGS & STRATTON 206 CUP CONSTRUCTORS CHAMPIONSHIP