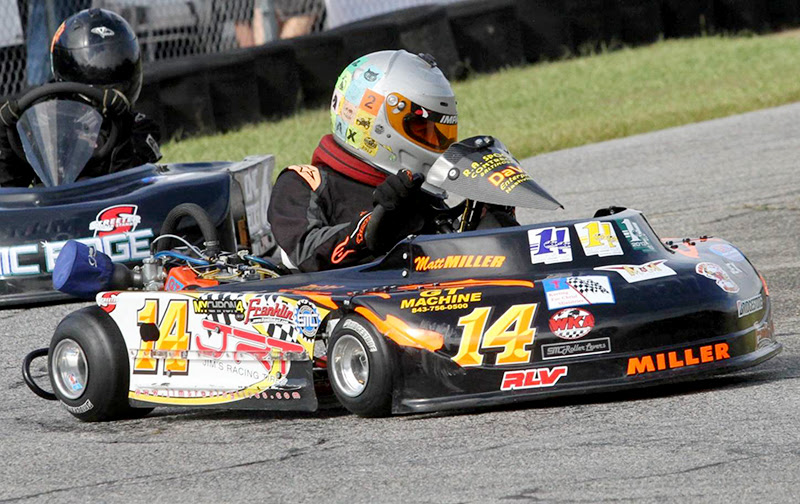 In the Gold Cup Series, Miller raced his Bandit chassis to six feature wins and 19 top-five finishes in an incredibly consistent and successful year. His six wins were instrumental in Bandit Chassis winning the Gold Cup Manufacturer championship, the company’s first in a number of years.

“It feels great,” Matt said about his six championships in 2015. “This isn’t something we just started doing. We’ve been trying to win a championship in the Gold Cup Series for a long time, and I was confident if I drove smart and we continued to work hard that 2015 would be our year. We never thought that we’d be able to top our five championships in 2012 when we won a WKA Speedway Pavement, three Gold Cup Divisionals and a class championship at Sandy Hook. We’ll keep working hard to have similar success next year.”

Driving a Bandit chassis throughout the year, Miller opened the season strong with a win, a second and a third-place finish in March at the 103rd Street Sports Complex in Jacksonville, Fla., and rode consistency to an opportunity at three championships heading into the Gold Cup’s final race last month at Barnesville. He won at least one feature at each of the four Gold Cup rounds this year, including three wins in July at G&J Kartway in Camden, Ohio. He also scored wins at Carolina Motorsports Park in June and closed out his championship season with a win in Sunday’s LO206 Junior final at Barnesville.

His best class was the new Junior LO206, which saw Matt win four of the eight finals on the year. In 24 main-event starts this year in the Gold Cup Series, Miller finished outside the top-five only five times.

Perhaps his most important race on the way to the Junior LO206 championship was the Sunday final at G&J. While leading the heat race Miller stripped out the sprocket hub on the last lap, relegating him to a last-place finish. Starting last in the final, Matt marched his way to the front of the pack and scored a big win to close out the third national weekend of the season. It was a terrific drive after the disappointing heat race result, and one that Miller needed for the championship standings.

In August, Miller and the Matt Miller Racing team branched out and traveled to Pittsburgh International Race Complex to compete in the WKA Manufacturers Cup Series for the first time.

The Grand National event at Pittsburgh marked the first time Matt raced 2-cycle on a national level, and he found success in his first Man Cup outing, driving to a solid fifth-place finish in the 16-lap Yamaha Junior final.

Miller drove a new Tony Kart chassis at the Man Cup Grand National and improved his times and performance throughout the weekend while racing against some of the most talented junior kart racers on the east coast.

The team will run all five of the 2016 Manufacturers Cup events in the Yamaha Junior class as well as all four Gold Cup national events in Junior LO206 and Junior Pro Gas Lite and Heavy.

“We had a great year and I want to thank everyone who helped us,” Matt said “Thanks to my dad for all his hard work and dedication and to Bob Spooner for his help at all the national and divisional events and preparation in the shop. We want to give a special ‘thank you’ to Dave Koehler at GT Machine for providing flawless engines all year. Also JimsRacingTires.com, DaVal Enterprises, Robert A. Spooner General Contractors, SMC Clutches, M&M Performance Bodies, Wylie Design and SandyHookSpeedway.com all help us out as sponsors and we couldn’t do it without them.”

Next up for Matt Miller Racing is round one of the 2016 WKA Manufacturers Cup Series December 27-30 at Daytona International Speedway. This will be Matt’s second time racing at the DIS kart track. In January, Matt was part of the youngest five-driver team to compete in the 24-hour Endurance Karting event where his team finished fourth out of 28 teams.

Matt Miller Racing is a Maryland-based family-owned kart team that competes in the WKA Gold Cup (Briggs 4-cycle) and WKA Manufacturers Cup (Yamaha 2-cycle) series on a national level, as well as the Maryland Sprint Divisional Series on a regional level.

For more information on Matt, visit his official website at MattMillerRacing.com.