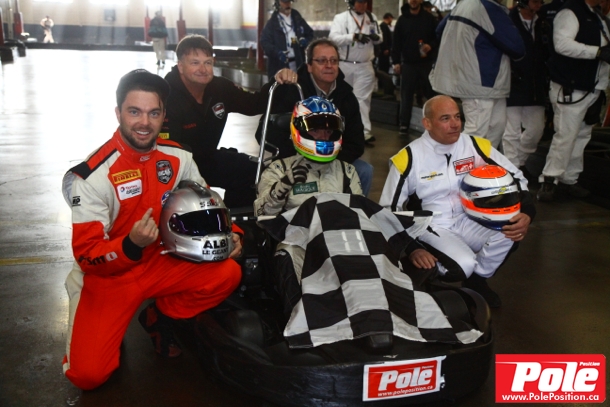 The indoor karting event that traditionally marks the opening of a new racing season in Eastern Canada – the Pole Position 4-Hour karting race – was held this past weekend at Kart-O-Mania in Montreal.

For the past 14 years, the popular indoor karting endurance race has marked the launch of the new motorsport season. The event is open to competitors of any motorsport category, ranging from road racing to stock cars, and from rallying and karting and to race enthusiasts, coming mostly from Quebec and Ontario.


This year’s edition was made of 11 teams of four drivers each. For logistical reasons, organizers limited the number of teams to 11. The race is four-hour long, and each competitor must drive for a minimum of 45 minutes. Teams plan their own race strategies while the karts and the starting positions are decided by a draw.

Yours truly was part of the works Nissan Micra Cup team, alongside the 2015 series’ champion Olivier Bédard, the reigning champion Xavier Coupal and open-wheel racer Marc-Antoine Cardin. Several top kart racers entered the event, plus many other competitors of the Micra Cup as well as the Wittmer family, lead by well know BMW Team RLL driver Kuno, acting as Team Manager.

Rally champion Mathieu Dubé started from the pole and led the early part of the race while Bédard, who started 9th, made his way through the field and took the command on lap 60.


Coupal took over from Bédard and battled against the very fast and 7-time winner of the event Paul Heng of team M.K.S. Team Nissan Micra Cup then started to pull away from the rest of the field and enjoyed an eight-lap advantage at the start of the final hour. I personally enjoyed an intense, but fun and fair battle with Bertrand Godin before giving the wheel to Cardin. We stopped for a fuel check with just 25 minutes to go, and decided to splash a litre of petrol, just in case.

After four hours and 521 laps, our team crossed the line in first place, six laps ahead of team M.K.S. Team Wittmer Racing finished third, just a few seconds behind M.K.S.

None of us at Team Nissan Micra Cup had driven on the new track layout before the event. Despite this, we set the fastest time during the (very) short 15-minute warm-up, set the track record (Xavier Coupal in 25.763 seconds) and established the fastest lap average (in 27.659 seconds). And for us four, it was our first win at this event.


Congratulations to all participants and organizers. It was a great event!