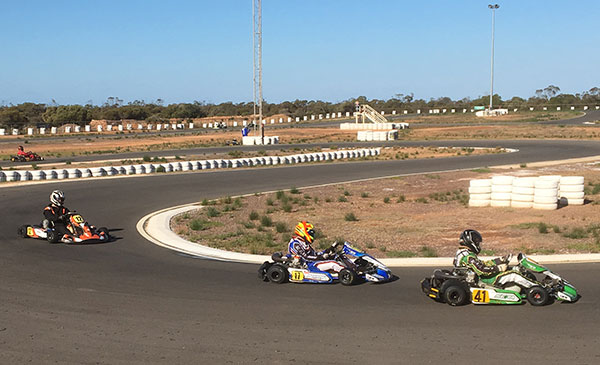 Whyalla Kart Club has had a busy month with a race day on the first of the month, a sponsorship drive and working bees in preparation for the upcoming Whyalla City Titles.

Although smaller numbers, with some locals racing interstate, the June 1st club day meeting had some good racing with all senior classes combined.

There were a few first corner clashes as the fields sorted themselves out. Considering the mix of classes, the racing was clean, and all the drivers showed each other a lot of respect.

Aaran Gray showed some good speed in his Open Performance kart, Ashlyn Clift mixed it up with the field in KA3 senior light. Combining the TaG class weight divisions and running the Championship weight class had Luke Clee take the win in front of Scott Harper for a close second.

The last of the classes had Corey Clift win in the Tag Restricted Light class in front of Dylan Hewson and Liam Spencer.

KA3 Junior and KA4 Junior light combined Cadence Florentinus in KA3 and KA4 had Liam McCourt fly the flag for the junior drivers.

With only a couple of months until the Whyalla City Titles, the club has been chasing sponsorship to assist in running the event and to provide cash prizes for every class, to the drivers that make the podium.

The team event will also be held again this year. This always adds a little bit extra to race for as the combined points from teams of 3 are calculated to decide the winners.

Whyalla City Titles will be held on the 25th August and should see some good fields for both drivers and spectators. Camping is available for those that wish to travel, with shower facilities. Also don’t forget the canteen and Frank’s Bar.

See you all there.