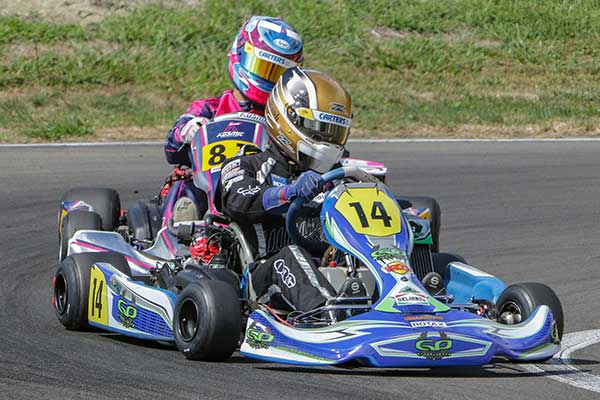 Jonathan Buxeda and Jackson Rooney impressed with their speed and adaptability at the opening (double header) rounds of this year’s Giltrap Group New Zealand Rotax Max Challenge kart series at Palmerston North over the weekend.

Both drivers dominated their respective classes over the two days, Buxeda, from Tuakau near Pukekohe, going on to top score in the DD2 class on Saturday (Rnd 1) and Sunday (Rnd 2), and local hero Rooney doing the same in Rotax Max Junior.

The double-header meeting was the first to be run under a new format, with a CIK-style Qual/Ht 1/Ht2/Pre-Final and Final one on Saturday then a five heat/pre-determined grid/drop your worst performance one on Sunday.

Despite the difference it was very much ‘business-as-usual’ for Buxeda and Rooney, each qualifying quickest and taking heat and Final wins on Saturday (Rooney also set a new class track lap record in his Final) then consistently moving forward and winning at least two heats each to claim class wins again on Sunday. 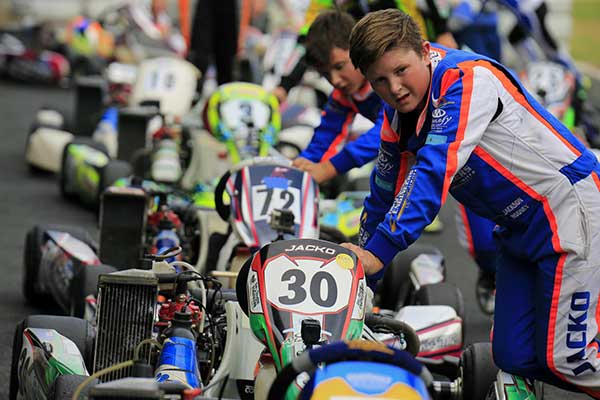 The pair did so in the face of intense competition too, in particular Jackson Rooney who faced the cream of New Zealand’s current crop of Juniors.

Top-ranked Wellington driver Ryan Wood, who won the Junior Max class at the opening round of Australia’s Rotax Pro Tour in Melbourne last month, won the second heat and Pre-Final and finished  a close second to Rooney in the Final on Saturday, and won two of the five class heats on Sunday.

The Osborne brothers, Clay and Fynn, from Hamilton, were also right there on both days finishing third (Fynn) and fourth (Clay) in Saturday’s Final and second (Clay) and third (Fynn) in the points on Sunday with current class North Island champion Ryan Crombie fourth and Wood fifth.

In the other classes, Christchurch’s Matthew Hamilton looked set to dominate  DD2 Masters on both days only to come off second best in a clash and fail to finish the Final on Saturday. That left the way open for local ace Callum Orr to claim the top spot on the podium that day – from Simon Hunter and Fraser Hart. 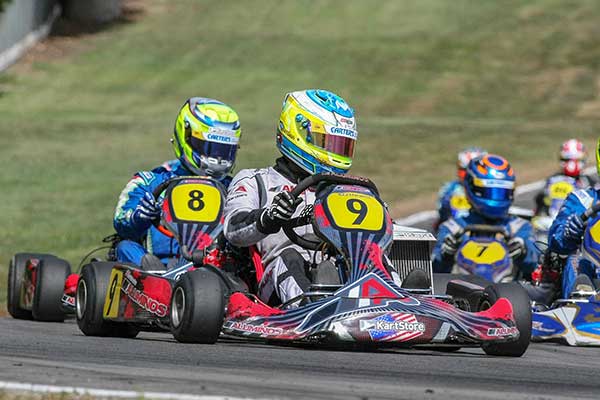 Hamilton was back to his best on Sunday, however, winning three of the heats and finishing second in one of the others.

Ashton Grant and Jaden Hardy shared the spoils in Rotax Max Light, with Grant qualifying quickest and winning the Final on Saturday but Hardy showing his hand with wins in the first heat and the Pre-Final. He also twice lowered the class track record, for the first time in the first heat (43.694) then again in the second (43.573).

Hardy then went on to claim three heat wins to Grant’s one on Sunday, to take the Rnd 2 win from Grant and young Hawke’s Bay driver Zac Stichbury. It was Grant, however, who left the track with the ultimate class lap record, lowering it further in the first heat race on Sunday morning to leave it at 43.449! 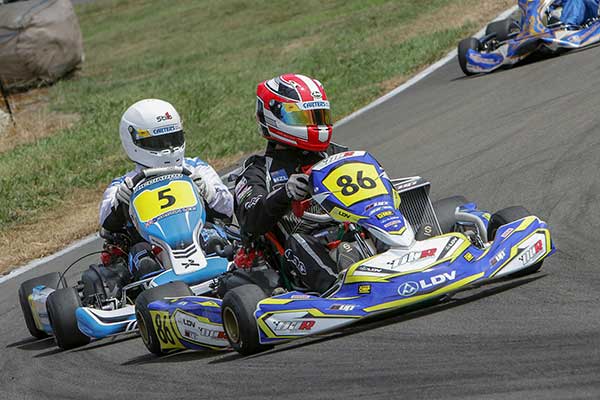 If there was a prize, finally, for most complete winning performance, it would have to have gone to Auckland driver Dave Malcolm. A member of the team which last year represented New Zealand at the Grand Finals meeting in Portugal, Malcolm was simply in a class of his own in the 50+ DD2 Super Masters category in the DD2 Masters class, finishing top of his category in all races over the weekend.

Now in its 19th year the New Zealand series has again attracted a talented group of karters of all ages, all keen to qualify for a spot on the local squad which attends the annual Grand Finals meeting which this year is being held in at Conde in the Paraiba province of Brazil between November 24 and December 01.

Round 2 (Sunday)
Points after 4 best of 5 heats