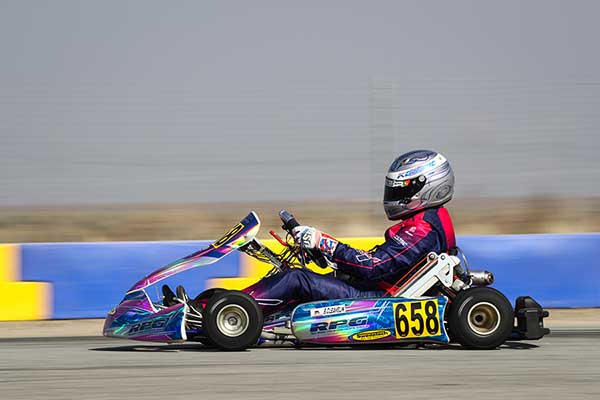 Championship season gets underway with exciting opening round of Superkarts! USA flagship regional program at Buttonwillow

The Superkarts! USA schedule on the west coast kicked off with the opening event of the California ProKart Challenge on February 2-3 at the Buttonwillow Raceway Park. The SKUSA flagship regional program welcomed over 150 drivers to the challenging 7/10-mile course in Buttonwillow, California. The weather was perfect for racing, and the now 12 different categories featuring Honda and IAME powerplants raced into the amazing sunset as the first event closed. The busy day of racing on Saturday featured seven new winners at the California PKC.

Billy Musgrave has won the California ProKart Challenge title four times in the last five years. In 2013 and 2016, Musgrave started the season off with a victory. 2018 could be a third time he has started a championship year with a win, as the SuperNationals 21 victor took the top step of the podium in the Mad Old Nut S1 Pro Stock Honda class. The day in Buttonwillow was a sweep for Musgrave, never putting a wheel wrong. Musgrave set fast time in qualifying over the 11-driver field, leading all the laps in both heat races, along with the 18-lap Final for a two-second advantage. 2017 race winner Mathias Podboj ran second, with former series champ Jimmy McNeil placing third. Cody Hodgson and Clinton Schoombee rounded out the top-five. 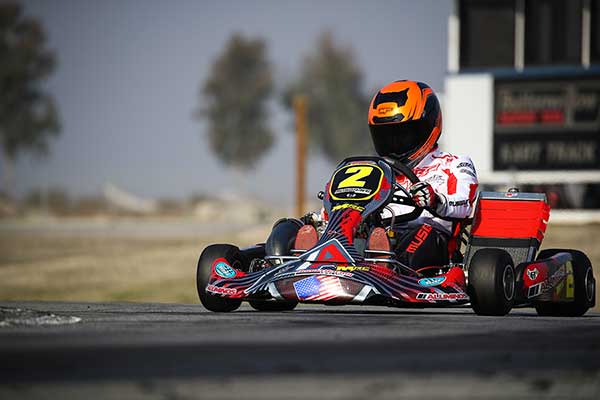 A near sold-out field contested the Phil Giebler Racing X30 Senior division. Thirty-nine drivers took part in the opening round of the 2018 championship chase, feature a number of champions, race winners and other talented pilots searching to start the year off right. Billy Musgrave, pulling double duty once again, set the tone with his 49.182-second lap in qualifying to best the entire field, just 27 thousandths quicker than last year’s champion and Buttonwillow winner Nicky Hays. Musgrave was able to lead all 10 laps of the opening heat race, stalked by Sonny Cervelli at the end. Contact on the opening lap of the second heat shuffled up the field, allowing Christian Brooks to slide into the lead and go on for the win ahead of Senior rookie Joseph Daniele. It was the rookie Daniele that jumped out to the lead of the 18-lap Final as Brooks suffered a problem on the opening lap, unable to continue. Daniele was leading until halfway when Nic LeDuc took the top position. LeDuc spent much of the day inside the top-10, starting the main event in P4. Once in the lead, the 2017 SKUSA Pro Tour Round 3 winner in S1 held the position to the checkered flag for the victory. Daniele crossed the line second, while Nick Ramirez climbed 12 positions to third. Cervelli and former SKUSA Pro Tour Junior title winner Luke Selliken rounded out the top-five. 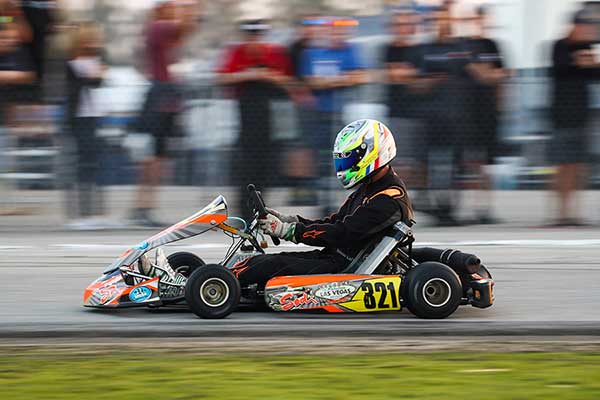 Nic LeDuc emerged with the victory in the competitive X30 Senior (pic – DromoPhotos.com)

The Swiss-Micron S2 Semi-Pro Stock Honda division welcomed first-time winner Dean Heldt. The 2016 S5 PKC champion swept the action on the day over the 12-driver field. Things were close in qualifying, as Heldt edged out 2017 S3 champion Zach Pettinicchi and Ohio driver Andrew Bujdoso by less than six hundredths of a second. Bujdoso grabbed the holeshot to begin Heat #1, with Heldt finding his way back to the point before the checkered flag. Heat #2 saw similar results, with Bujdoso out front early until Heldt regained the lead for the race win. The start of the Final had Pettinicchi grab the holeshot over both, as Bujdoso slipped down the order. By the halfway point, Heldt took back the lead, and was able to hold off Pettinicchi for his first S2 victory. Bujdoso fought his way back to finish third on the podium ahead of S2 rookie Keawn Tandon and Garrett McKelvie. 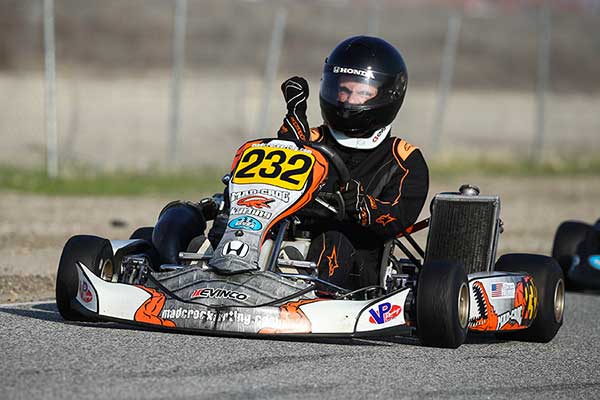 The 2018 opener for the California PKC program marked the debut of a split in the X30 Master category. The Empire Karts X30 Super Master division welcomes drivers 45 years of age and older to compete in the class, racing alongside the Rolison Performance Group X30 Master class. Nick de Graaf was able to repeat his X30 Master victory from last year to start out the 2018 season on top of the podium. 2017 champion Jess Peterson looked to have the event locked in for a sweep. Peterson cleared the nine-driver field by over two tenths of a second in qualifying. Peterson went wire-to-wire in both heat races, with de Graaf running second. After leading the first three laps of the Final, Peterson began to drop down the order with an electrical issue forcing him to pull off course. This gave de Graaf the lead, as he drove away unchallenged to victory by 2.5 seconds. Carlos Calderon finished second, with Tim Meyer rounding out the podium. Adam White and Erik Jackson finished fourth and fifth. John Nielsen became the inaugural winner in the X30 Super Master division. Ron Jenkins led the way through the day, setting fast time in qualifying and winning both heat races. Nielsen took the lead from Jenkins in the Final on lap nine, going on to score the victory. Jenkins ended up second, with Jared Booher completing the inaugural podium in third. 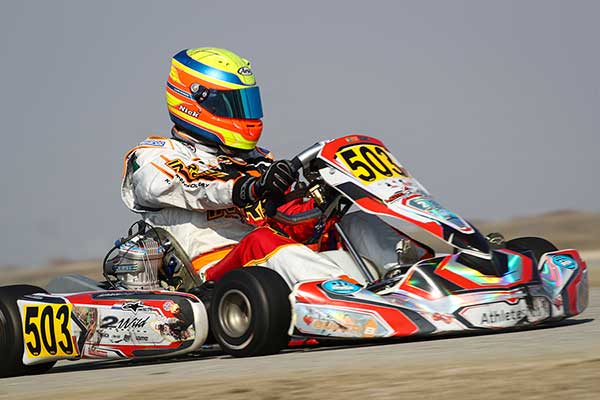 Nick de Graaf added another victory to his total in the X30 Master division (pic – DromoPhotos.com)

Robert Marks came within 29 thousandths from sweeping the opening round in the Doran Motorsports Group S4 Master Stock Honda division. That was the difference between the fast lap set by Marks and Mike Mantel in qualifying. Mantel got the edge on Marks, however the roles were reversed for the rest of the day. Marks went wire-to-wire in both heat races and the Final over Mantel. Vivek Tandon finished third with Nick George and Matthew O’Donnell completed the top-five. A sweep was on the mind of defending champion John Crow in the Musgrave Racing Company S4 Super Master Stock Honda category, featuring 12 drivers. Crow recorded the fast time in qualifying and set the pace in each of the heat races. A stalled kart as the main event got underway collected Crow and damaged his kart enough to not continue. That put Sean Bond in the lead until a charging Billy Cleavelin came through to take over the top spot. The former SuperNationals winner in TaG competition went on to score the victory in his Stock Honda debut. Bond ended up second, with Darrell Tunnell in third. Jonathon Allen and Ken Schilling made up the top-five. 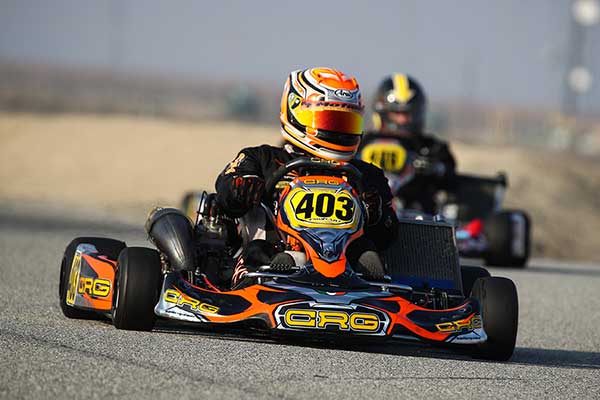 The Ace High Designs S3 Novice Stock Honda class also welcomed a first time winner. Kyle Loh set the fast time in qualifying by two tenths of a second over Emon Fazlollahi. The order remained unchanged in the opening heat race, with Fazlollahi able to get off the line first and lead the entire second heat race. Fazlollahi maintained the lead throughout the entire 18-lap Final to clinch his first victory. Eddie Tafoya slipped ahead of Loh for the second position on the podium. The Mike Manning Karting S5 Junior Stock Honda division was won by defending champion Jacopo Pizzinato. Seth Huntley broke up the perfect score for the 2017 title winner, setting fast time in qualifying. Pizzinato went on to win both heat races and the main event to kick off his title defense. Huntley ran second, with Logan Meyer in third. 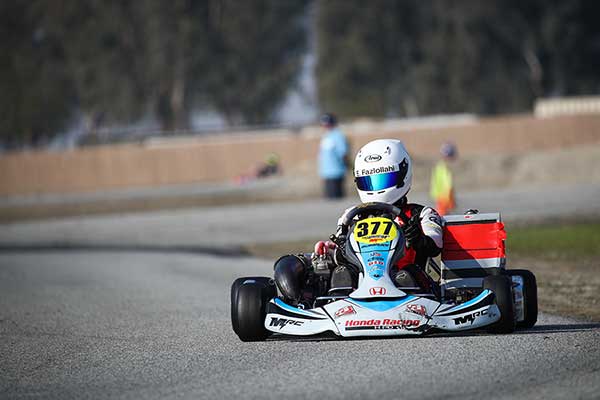 New faces at the front of the 25-driver field were the story in the Nash Motorsportz X30 Junior category. A number of drivers were graduating Cadet drivers making their Junior debut. Dustin Salaverria is one of them, and came just four thousandths from earning the fast time in qualifying, with 2017 Monterey winner Jace Denmark-Gessel setting the pole position lap. Salaverria was able to work his way into the lead and the win in Heat #1, bringing fellow rookie Cole Morgan with him. After a 10-lap battle, Morgan emerged with the win in Heat #2 as Alan Tang made his way up into the second spot. The trio of Morgan, Tang and Denmark-Gessel battled for the lead early on. Each took a turn before Jace controlled the position for the second half of the race. It wasn’t until two laps remained when Tang took an opportunity to retake the lead. From there, Alan hung on to reach the checkered flag in the lead for his first California ProKart Challenge victory. Denmark-Gessel settled for second with Jonathon Portz crossing the line third. A penalty for contact dropped him down to fifth in the final tally, moving Morgan onto the podium in his Junior debut, with Oliver Calvo advancing to fourth. 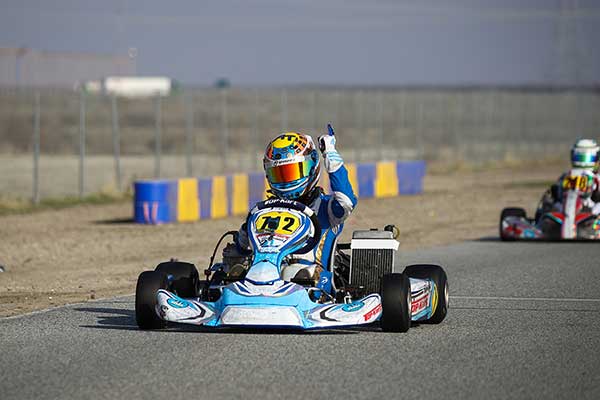 The Ryan Perry Motorsport Mini Swift division brought the most excitement for the opening event of the season. 2017 SKUSA Pro Tour title winner Carson Morgan set the pace in qualifying, edging out 2017 California PKC Micro Swift champion Logan Toke by 62 thousandths. 2017 California ProKart Challenge class champion Kai Sorensen joined the fight, placing second behind Morgan in both heat races, the second by just 85 thousandths. The two continued to run 1-2 in the Final, sizing each other up for a last lap battle. When the white flag flew, the two went after the victory. Contact ensued, and both drivers fell down the order with the rest of the 17-driver field passing by. That included Toke, who reached the checkered flag first to record the victory in his Mini Swift debut. Rylee Martinez was a close second, with Jackson Menchu in third. Cooper Hicks and AJ Zarcone completed the top-five. 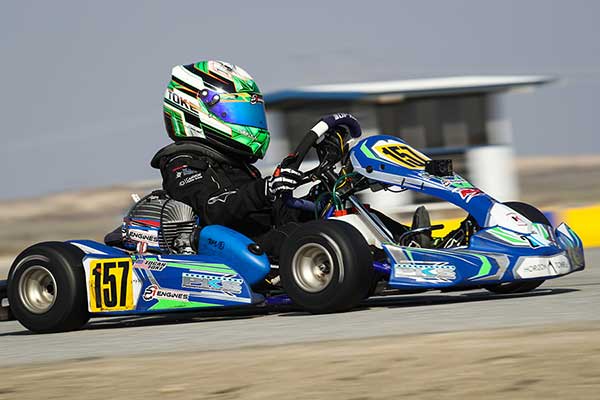 The PKS Kart Supplies Micro Swift was another category to welcome a first time winner at the California ProKart Challenge. 2017 Streets of Lancaster Grand Prix winner Parker DeLong set the pace in qualifying, but it was Graham Trammell that stole the show. Trammell won both heat races, and came away from an amazing battle in the Final to reach the checkered flag for his first series victory. DeLong ended up second, with Logan Chambers completing the podium and earning fast lap honors in the process.

The second event of the 2018 California ProKart Challenge is set for March 30-31 at the Willow Springs International Raceway in Rosamond, California. The ‘Streets of Willow’ course is among the fastest tracks in Superkarts! USA competition, and always a fun and exciting weekend for the California PKC. 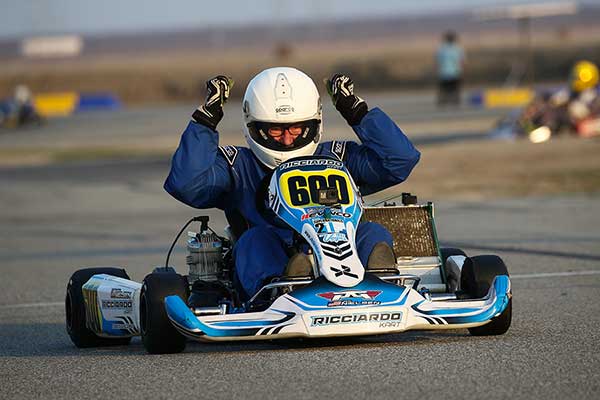 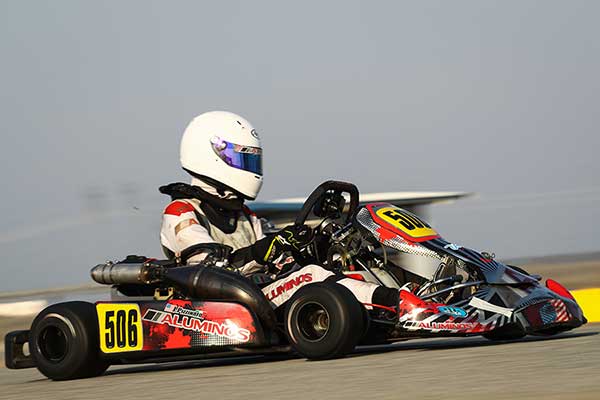