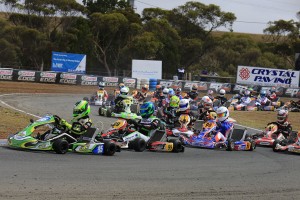 The youngster – in his second season with the factory JC Karts squad – has been solid under pressure. Victorian Henry Johnstone making his Championship debut has been impressive, so too Mitch Mackay.

Many of the regular front-runners were caught out in wet qualifying conditions this morning, however as the Monarto track dried and heats have developed have started to find their speed.

In the elite Junior KA2 category, FA Kart racer, Matthew Hillyer has set the pace. He bookended his day with two heat race wins. The second heat saw him come together with a fellow competitor forcing him off to the side of the track. Under revised AKC grid procedures, the third heat sees the grid formed from an accumulation of results from heats one and two.

This placed Hillyer 11th for heat three and he staged a stirring drive to come through the field and take – what became – a comfortable win.

With Hillyer’s heartbreak, the second heat saw a breakthrough win for second generation driver, Valentino Astuti after an enthralling battle – his first win in the category. Others up there have included Jaiden Pope, Jay Hanson, Kai Allen, Callum Bishop and Jonathon Marcusson.

KA3 Senior Champion, James Sera has set the pace in his Title defence aboard his FA Kart. The veteran took pole position this morning and wrapped the first and third heats. His Championship rival from last year, Matthew McLean pushed him all the way in heat one before dominating the second race. Jack Bell was another impressive driver, finishing second in the third heat – as were Jackson Souslin-Harlow and Oscar Priest on occasion.

KA1 is poised for a cracking finale tomorrow.  The class started with a first time pole position winner in Mat Stenner. He would go on to claim the opening heat race – his first heat race win in KA1. Joshua Denton brought home heat two, whilst defending Australian Champion, Scott Sorensen won heat three. Sorensen has had to get himself back into the race the hard way after a problem during qualifying this morning.

Australian Champion, Brendan Nelson picked up where he left off last year in TaG 125 – taking out two heat races today in his FA Kart. It isn’t as clear cut as what it might seem for the Queenslander, though, with Sydney-sider Cody Brewczynski setting the pace in qualifying then dominating the first heat.

KA4 Junior has been another highlight, with three different winners from the three races today. The greasy conditions caught a number of drivers out, including the graduating Cadet 12 Champion, James Wharton. Although mired deep in the field he wasted little time pushing forward in his Shamick Racing kart to start the third heat race on the outside front row and going on to take the heat win.

The opening heat was taken out by Fletcher Harris, before Kai Allen got through for a win in the second race. There could be any one of seven or eight drivers in with a shot of taking the win come tomorrow’s final. With so many drivers stepping into the category with a wealth of AKC experience from sub-Junior categories, it is going to be a thrilling conclusion.

Cameron Longmore is emerging as the man to beat in the oversubscribed X30 category. The brutal racing has seen him take two heat races, although Cody Gillis and Brendan Nelson (also heat race winners) will throw the challenge down to Longmore.

Lewis Francis has collected two wins in Cadet 9 the youngest category on track this weekend. The best celebration came in heat one when Max Walton – son of Series regular Kris – won his first ever AKC heat.

Meantime, Harry Arnett set the pace in Cadet 12 taking the first two heat race wins and will be a force to be reckoned with tomorrow.

Livestreaming of the SP Tools Australian Kart Championship, presented by Castrol EDGE will show on www.karting.net.au.

The Monarto Karting Complex is based just outside Murray Bridge in South Australia and entry is free to the public.