CRG AT THE EUROPEAN CHAMPIONSHIP IN SARNO, A SUCCESS STORY THAT CONTINUES… 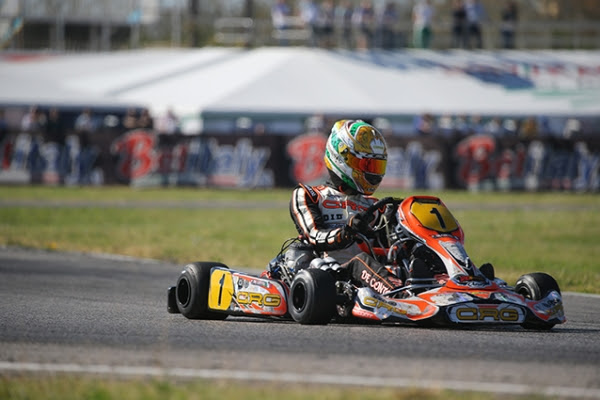 CRG works team is at the start of yet another season of CIK-FIA International Championships, that will be opened by the first round of the European KZ, OK and OK-Junior Championships to take place next April 23rd 2017 in Sarno. CRG’s hall of fame comprises 39 World titles, 45 European titles and 65 victories in international races.

Time is come. CIK-FIA Championship are at the starting blocks for another great international challenge and CRG is all set to play its cards, as done every year since 1986. CRG has celebrated its 30th anniversary in 2016 adding 5 more CIK-FIA titles to its showcase, but the story continues…

The kick off to the CIK-FIA season will take place at the International Circuit Napoli of Sarno (Salerno, Italy) with the opener of the European KZ, OK and OK-Junior Championships. This is an important appointment that CRG is ready to honor in the best possible way with its talented champions and several young drivers to be headed towards a nice career.

CRG comes from a highly successful season 2016, as happened in several previous seasons. “Repeating season 2016 will be difficult” was said at CRG, but a repeat of 2013 victories scored by Max Verstappen was thought to be difficult too… What is certain is that CRG works team is ready to get on track for the 2017 CIK-FIA Championships with the exact same determination and preparation to achieve the only objective it knows: victory!


The 30 years long history of CRG is packed with international victories, including the titles won by very strong drivers. Among these, those won by the current Formula 1 “stars” Max Verstappen, who put in a stunning 2013 season winning the KZ World Championship and the KZ and KF European Championships with CRG, and those secured by Lewis Hamilton, thirteen years before in 2000, when the Briton won the World Cup and the European Formula A Championship with the Italian outfit. CRG history comprises 39 World titles, 45 European titles and 65 wins in International races until now.

CRG FIELDING ITS ACES IN SARNO

CRG will field its “aces” in this season too. In Sarno, the reigning World Champion Paolo De Conto will compete in KZ, as 2015 KZ World ChampionJorrit Pex. Alongside them, the Italian outfit will line up several very quick drivers like Stan Pex, Mirko Torsellini, Enrico Prosperi, and the promisingAlessandro Giardelli. The European KZ2 Champion of 2014 Andrea Dalè will also wear CRG colors in the occasion.

CRG’s top driver for OK is 2012 KF1 World Champion, KF2 European Champion of 2008 and KZ European Champion of 2015 Flavio Camponeschi. Several other CRG drivers could aim to the victory in this category too, such as the Norwegian Dennis Hauger, the German Jannes Hanker, the British winner of the CIK-FIA Academy 2016 title Callum Bradshaw, the Finn William Alatalo, the young Spanish Kilian Meyer, the competitive Michael Rosina, and some private drivers like the Swede Alfred Nilsson and the German Jan David Fusen of CRG Holland, the Dutch Glenn Van Berlo of CRG Keijzer Racing, Alessandro Di Cori of Morsicani Racing and the Spanish driver Joan Sabater.

The young CRG team of OK-Junior is growing up very well in this early season, as several drivers already got on track at the Winter Cup, Andrea Margutti Trophy and in WSK races. In Sarno, CRG will field the French Gillian Henrion, the very young rookie Luca Giardelli, the Brazilian Gabriel Bortoleto, the Spanish Jose Antonio Gomez, Mathias Torreggiani, the Spanish Francisco Javier Sagrera, the British Ziggy Kermanshahchi and the German Donar Munding. The CRG private team CRG Keijzer Racing will field the Dutch Kas Haverkort, the German Hugo Sasse and the RussiansArtem Kosarev and Alexey Sizov, while CRG TB Racing Team will bring on track the German Luca Maish.