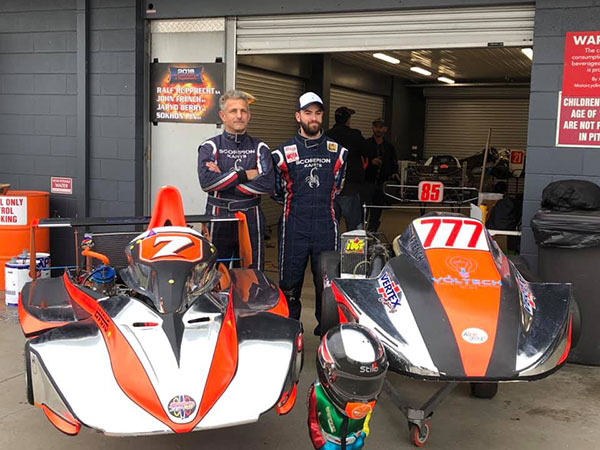 Phillip Island put on a stellar day of weather for all drivers today and produced perfect conditions for lap records and close racing.

Race one was a show from start to finish. Schembri took the lead and broke away with dark horse Darren Ridd but Occhipinti jumped straight up front to close the freight train of 10 drivers. Robert Strah struck trouble on lap three at Lukey Heights which ended Perera’s race after contact, which spread the field. Occhipinti slipstreamed past schembri on the line to take the win with a 4 way battle for third seeing Harry Georgiou come out on top

NSW driver Alan Dodge stole pole from Jarrod Sanfilippo, being the first Heavy Driver to lap in the 1:55’s ever.

Race one started and ended spectacularly. Sanfilippo danced away in the beginning although couldn’t keep the 9 kart strong train from working together and latching on again. Dodge and Brandon Stilwell tried to slip by at the line but couldn’t beat Sanfilippo’s smart craft while there was a constant four wide duel for 4th place.

Hayley Thompson has dominated the day with pole and a win, sneaking up and racing against the seniors. Christian Amadio and Lucas Quattrochi are slowly reducing the gap to Thompson each session, Amadio had to fight for 2nd place after a quiet race as Quartrocchi hunted him down for a last lap dice. Both drivers are confident chassis changes will catch them up in the next race. Kobe Veld, James Strah and Finn White are getting their head around the track and improving each race, hinting that the finals tomorrow will be even closer

The South Australians have come in force, taking over the top positions. Jim Gorman got the better of local Shane Varley in a close battle in race one, followed by Rick Hobman. The close field should see Jeff Duckworth back up front fighting for the National Title tomorrow after an unlucky first race.

Reigning Festival Champion Kristian Stebbing is keeping his nose clear at the front, closely followed by Anton Stevens who is ready to pounce for the rest of the weekend. Tim Clarke is peddling his old Rotax well to earn 3rd, Jamie Macdonald is hoping to improve on his distant 4th place with drastic Aero adjustments. Raff Pironti and Peter Kay kept their Noses clean in their single cylinder karts along with newcomer Simon Goyne to round out the field

Race one saw Brad Tremain and Garry Pegoraro sneak up with Schembri and Jordan Ford but they couldn’t keep touch as Ford and Schembri diced up front, slipstreaming together to swap lap records lap after lap. Ford got the better of Schembri across the line in what looks like an exciting and close weekend to watch. Tony Lappas rounded out the top three ahead of Jack Wynack and Geoff Lawrence with Pegoraro falling back while Tremain DNF’d with mechanical dramas.

Tomorrow’s weather will throw a spanner in the works, predicted to be dry early with rain set to challenge all classes in the Finals