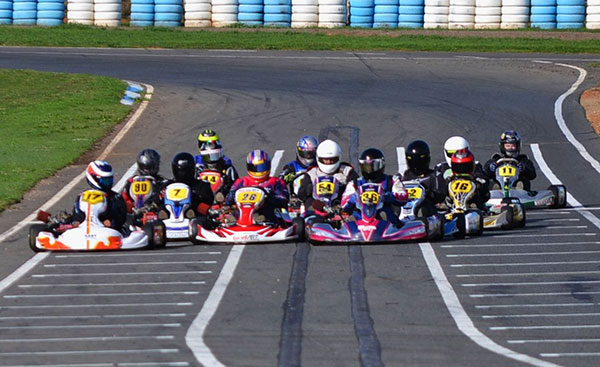 Sunday the 28th of July saw the running of the annual Dublin Winter Cup at Monarto, plus a bunch of potential karters running Bring-A-Mate sessions.

It was a great turn out for the event with over 65 entrants and 16 mates registered for Bring-a-Mate sessions which ran throughout the day at the end of each round of racing, a format that was well received.

The track is looking decidedly greener now than at the recent AKC event and the seasonal greenery certainly added a special touch to the facility.

There was close racing across all classes and fine weather, despite a wet forecast. Lap records tumbled in every single class, with the club opting to use the fast 780 Meter, “C” track reverse layout. This is one of 4 layouts which can run in either direction at the Monarto facility.

Restricted 125 Light has been the hotly contested class at SA club days for some time, and this meeting was no different. Ryan Morgan showed once again that he is a class act in the category showing the rest of the field how it’s done in his SA built Excell Chassis.

4SS has been the fastest growing class in SA over the 2019 season, with more than 20 licenced drivers now running the class in the state, 13 of those drivers supported this meeting and the battles were fierce! David Rinaldi (26) proved too good in his Birel/Torini edging out SA’s 4SS Ambassador Tim Murphy (7) and Daniel Bowden (36). While Craig Owen Showed a clean pair of heels to Peter Fritz on debut in the heavy class.

Cadet classes were well supported, with some super close racing – check out the picture below of the Cadet 12 field, where Jack Szewczuk (29) edged out a hard charging Anthony Capobianco (49) to take the win.

In the TaG 125 Light and Open Performance classes, it was a case of the apprentice showing the master as young James Boden beat Go Kart Club of SA President Brandon Stillwell home in both classes. Though in Open Performance, Jarrad Roberts thumped it home in his KZ, ahead of James, Brandon and Aaron Gray all in DD2 machinery; a format which has seen an increase in interest in SA of late.

In the junior classes, Rhys Bartlett (76) as the sole KA3 Junior competitor gave the Brodie Sharp (36) at the front of the KA4 Junior field a rapid target to chase!

Restricted Medium formed on track with SA Combined Masters and KA3 Senior with Adam Sharp returning to the race track after a season long break in a new SA built Omega Chassis. Adam was too strong for seasoned racer John Ellis who made the trip from the Barossa and edged out Sebastian Zillante who was stoked to be on the podium. Local driver Emilio Colantuono kept the Restricted Medium drivers honest in his KA100 powered kart under the SA Combined Masters class, proving again that the combined KA/restricted class is working when used at the right weights.

One of the highlights of the meeting was watching the reactions of the 16 registered Mates who went out onto the track in a variety of chassis and engines allowed under the mates format throughout the day.

The club also debuted its two Torini powered karts which were recently assembled by T4 Kartworks. The karts were kept busy, running in 6 sessions each and ran faultlessly all day. The club is positive that it may see some new faces join in the coming months as a result.