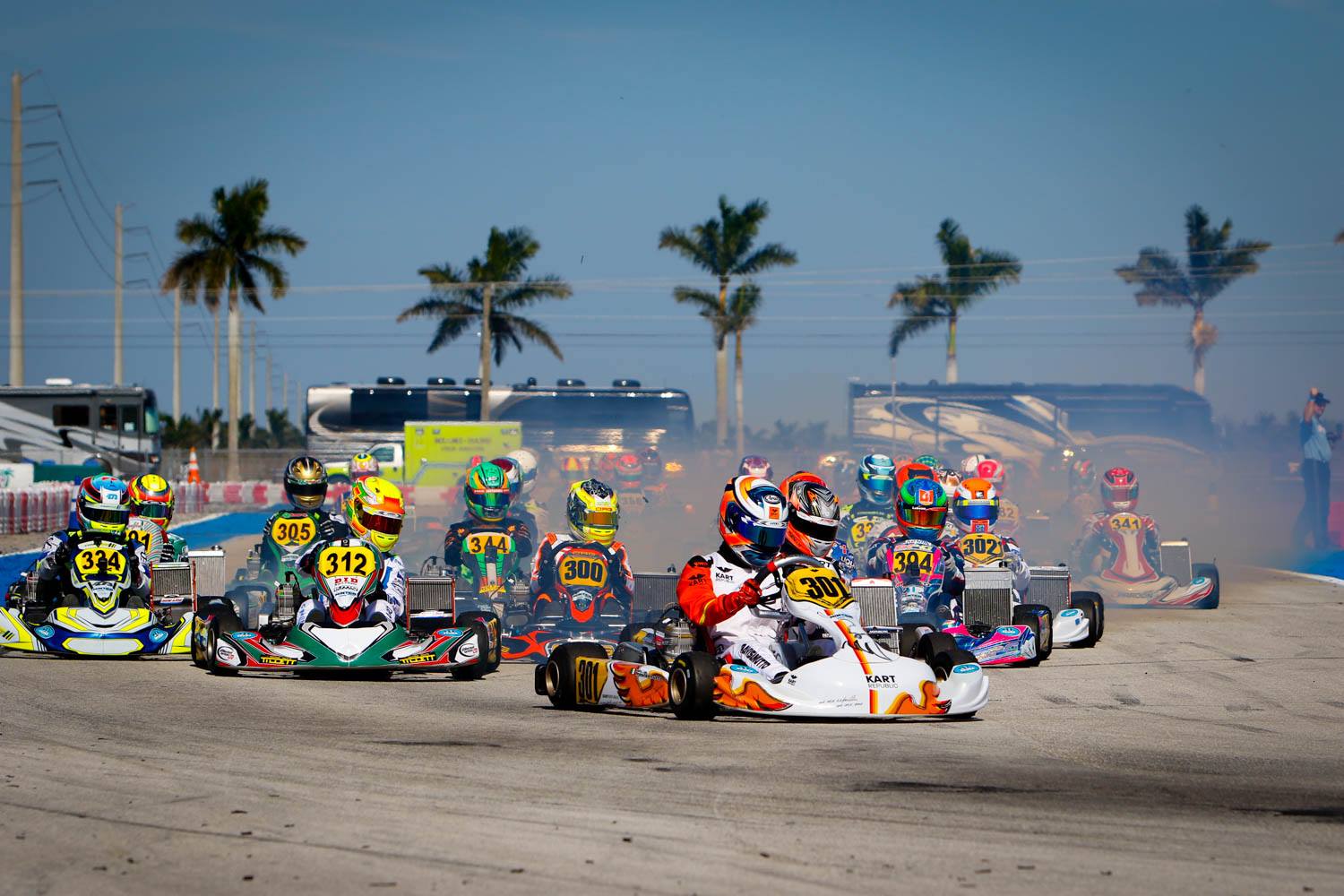 Superkarts! USA launched the initial Florida Winter Tour in December of 1998, simply because Don Janowski and his son Joe didn’t want to stop racing in October when it got cold in the Midwest. The Florida gearbox program quickly gained supporters, which fueled momentum, and over the next handful of years, the program became the unofficial off-season racing series, run by Bill Wright.  Fast forward a dozen years, and the Superkarts! USA brand made its return to the Sunshine State this past weekend, and it was a very successful homecoming at that. A packed paddock featured 220 entries, highlighted by full fields in Mini Swift, X30 Junior and X30 Senior.  The racing was a little chaotic on Saturday, but things improved drastically on Sunday.  On track, Dante Yu and Lorenzo Travisanutto topped the X30 Senior races, while Daniel Formal and Bill Musgrave split the S1 wins. With this event, the 2018 SKUSA competition season is underway. 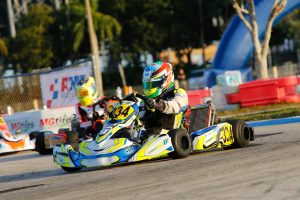 Dante Yu was awarded the victory on Saturday in X30 Senior (Photo: On Track Promotions – otp.ca)

The PSL Karting X30 Senior class was stacked with talent, including several of the international drivers who starred at the SKUSA SuperNationals 21 in Las Vegas.  Kart Republic’s Travisanutto was back for redemption, after losing his Vegas win to a jumpstart penalty, as was fellow podium finisher Callum Bradshaw, who was back with the CRG Nordam operation.

Travisanutto picked up where he left off, securing the Saturday pole position in qualifying over J3 Competition’s Dante Yu (CompKart) and SKUSA Pro Tour champion Ryan Norberg (Birel ART), who is back with PSL Karting for 2018.  Travisanutto won the Prefinal as well to maintain the inside front row position, but he fell back in the main event, which was an absolute UFC-like brawl. Two red flags slowed the action, as racecraft was noticeably absent. When the race finally went green to the finish, Musgrave Racing Company’s Billy Musgrave (Mad Croc) found himself in the lead after somehow navigating through a crazy wreck-filled lap.  Musgrave held off a charging Yu to take the win, but he came up short at the scales and was disqualified, giving the victory to the young CompKart pilot. Dallas Karting Complex / Sodikart driver Jake French, the SKUSA Pro Tour S1 champion, elected to run X30 Senior in Homestead and was also able to avoid the carnage to finish second.  Red Bull Global Rallycross Lites driver Christian Brooks (CRG) made his return to SKUSA action and was on his game, finishing third. Bradshaw took fourth while Lane Vacala (CompKart) competed a great day to finish fifth. 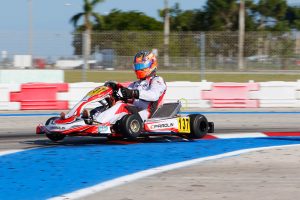 Daniel Formal won in his debut aboard the Parolin in S1 (Photo: On Track Promotions – otp.ca)

On Sunday, Travisanutto dominated the day to finally score the win that he was not able to celebrate in Las Vegas. Bradshaw, Norberg and Yu waged war for the final steps on the podium, with Bradshaw and Norberg securing those positions at the end of a much cleaner 24-lap main. Yu and Musgrave capped the top-five. 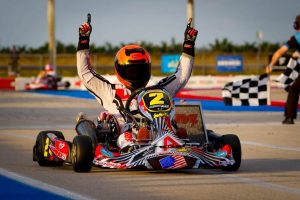 The Sunday main event was all Musgrave, as he dropped the holeshot and walked away to the win as Formal had his hands full with eventual S2 winner Collin Daley (DR Kart). DRT Racing’s Daley pressured Formal for a majority of the race and then found a way past in the late going, impressing the paddock by passing one of North American karting’s finest gearbox pilots for second overall.  Formal took second in S1 at the checker, ahead of Dickenson.  Daley completed a strong day with the S2 victory, while Lopes made a last lap pass on DAMZ pilot Blair Hosie (Alpha Kart) to steal second. Elliott recorded his second top-five of the weekend by finishing fourth on Sunday, ahead of Riley Cann (Sodikart).

The depth of the Rolison Performance Group X30 Junior field at the SKUSA Winter Series is unreal, and on Saturday, Sebastian Montoya (Tony Kart), Tyler Gonzalez (Tony Kart) and Matheus Morgatto (Parolin) found themselves embroiled in a fight for the race win. Coming off a win at the WKA Manufacturers Cup Series race in Daytona in late December, Montoya arrived in Homestead with both momentum and confidence. The second-generation driver continued his streak with a 0.100-second win in a close fight to the finish, and was joined by Gonzalez and Morgatto on the podium. PSL Karting’s Thomas Nepveu (Birel ART) was fourth, while CRG Nordam’s Tyler Maxson (CRG) capped the day in fifth. 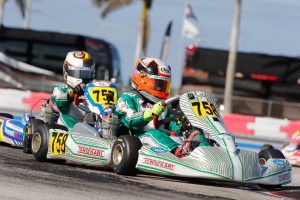 Sunday’s race featured the Speed Concepts duo of Arias Deukmedjian and Gonzalez up front for a majority of the race, that is, until Maxson reeled them in over the final laps. Maxson was able to get past Gonzalez, but he just could not complete the pass on Deukmedjian despite applying considerable pressure. Duekmedjian was extremely impressive, scoring his first major Superkarts! USA victory. Nepveu and AM Racing’s Jeremy Fairbairn (Parolin) completed the top-five. Reece Gold (Benik) put on an incredible show, coming from 38th to fifth over the 24-lap distance. 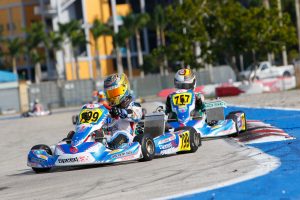 Franklin Motorsports X30 Master drew 18 drivers for the opening weekend, and while the racing was solid, one particular driver ran afoul of the officials in both of the main events.  Rodrigo Piquet (Kart Mini) was undeniably quick, and despite the fact that he won both races, he was issued a total of five penalties in the finals, which dropped him off the podium. In the opening main, Piquet knocked Scott Roberts (Tony Kart) off the track in turn 12 while Roberts led, and officials would place him behind Roberts in the final tally (ninth).  He was also hit with two blocking penalties while leading.  Renato David (Tony Kart) inherited the win on Saturday, and was joined on the podium by two-time SKUSA Pro Tour champion Derek Wang (FA Kart) and SummerNats winner Laurentiu Mardan (Kosmic). Jonathan Silva (CompKart) and Miguel Mier (Birel ART) completed the top-five. In Sunday action, Piquet was again victorious, but he earned penalties for jumping the start and blocking, dropping him to sixth. Wang took to the top step of the podium as a result, joined by David and Roberts. Mardan and Mier took fourth and fifth to cap the event. 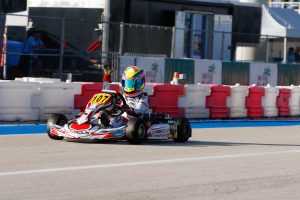 The Energy Corse Racing Mini Swift class drew a stellar field of 49 drivers for the opening weekend of the inaugural SKUSA Winter Series. The Saturday main event would quickly develop into a battle with Connor Zilisch (Energy) and Carson Morgan (Benik), similar to the SuperSunday main event in Las Vegas.  Nikita Johnson (Parolin) was the driver on the move, however, and he slipped into the top-four by the midway point to begin his run at the win.  Johnson moved Morgan back to fourth and then picked up second when he passed Lucas Rodriguez (Benik) to set his sights on Zilisch.  The final laps were thrilling, as Johnson found a way by and would then hold the lead through the to the checkered flag. Morgan would end up in fourth behind Rodriguez at the tail of the lead quartet, while Team Koene USA’s James Igozi (Tony Kart) outran Jace Park (Parolin) for fifth. Two impressive performances were turned in by drivers who got together in the Prefinal. Alex Powell (Energy) started 35th and worked his way to 11th, while Brent Crews (Nitro Kart) was forced to start on the 22nd row after the Prefinal DNF, and he was on fire early.  Crews was on pace to pass two karts per lap, but stalled his progress as he reached the top-15, eventually finishing 13th for a 31-position improvement. 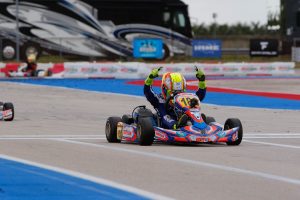 On Sunday, a three-driver battle developed between Morgan, Crews and Igozi that went down to the final laps. Crews took the lead briefly but Morgan was able to get back to the point, and he would take a 0.437-second victory. Crews and Igozi completed the podium, while Zilisch finished fourth, running alone on the track. Brash Racing’s Branyon Tiner (Energy) topped a four-kart battle, taking fifth ahead of Alex Stanfield (Energy).

The Energy Kart North America Micro Swift drivers put on the best display of racecraft on the weekend, and the lead battles were tremendous.  Max Garcia (Benik), Parker DeLong (Nitro Kart), Caleb Gafrarar (Parolin) and Danny Dyszelski (Energy) were covered by less than a half-second for most of the race until Gafrarar lost the draft.  Over the final laps, Garcia worked his way to the lead to score the win, which was the first major event for the hometown driver from Homestead. DeLong finished second ahead of Dyszelski, but a five-second start infraction dropped him behind Gafrarar in the final tally. Ben Maier (Nitro Kart) completed the top-five, having spent a majority of the race running in P5 by himself, with no draft help.

Sunday’s final was more of the same, and this time, Gafrarar led for a majority of the race after starting on the pole.  Maier and Dyszelski completed the lead trio that ran nose-to-tail all race long, joined by DeLong.  The fight for the race win was thrilling, with Maier scoring the victory over Gafrarar and Dyszelski. Matias Orjuela took fourth ahead of Garcia. 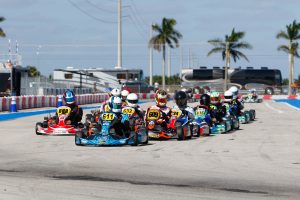 SKUSA welcomed the Briggs 206 drivers to the Winter Series and the class was sponsored by long-time Florida karting supporter RYSA Racing.  In the 206 Senior class, Colin Warren (VLR) dominated the action, winning both main events by a large margin. Canadians Alex Murphy (Birel ART) and Marc Stehle (BirelART) completed the podium on Saturday, while William Isaias and Alex Searle (MGM) took second and third on Sunday. Searle’s story was uniquely interesting as the race was the young driver’s second outdoor event since moving from indoor karting at the K1 Speed facility in Fort Lauderdale. Searle was very impressed, and is certainly talented.

The Superkarts! USA Winter Series is now off and running, and the final doubleheader weekend of the inaugural season will take place on February 9-11 at Ocala Gran Prix in Ocala, FL.  EKN will be there to provide fuel live play-by-play and Trackside Live coverage.