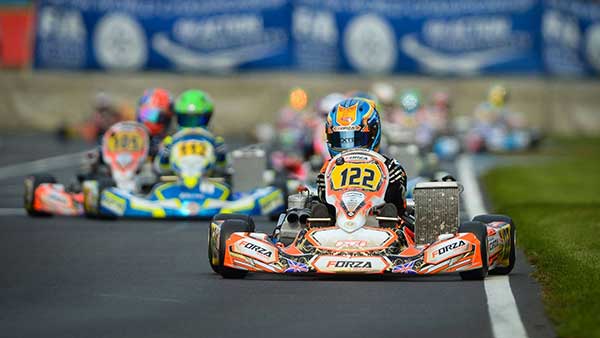 The new CIK-FIA World Junior Champion is part of the bright-eyed younger generation. Raised in the tough British karting scene, Dexter Patterson was well-equipped to learn about the international OK-Junior class in 2017. After a few achievements at the start of the season, everything was set up for the CIK-FIA World Junior Championship. After his world title, his speed and maturity have opened the doors to a great career.

DEXTER, HOW DID YOU COME TO START KART RACING?
My father was himself a kart driver. So I was immersed in the racing atmosphere very early, which made me want to follow in his footsteps. I started racing at the age of 6 in Scotland, in a Bambino, then I raced in Mini and Junior. My family has always been my main support to progress in competition. The many races I’ve been to in the UK have taught me a lot about strategy and fighting in the pack.

CAN YOU TELL US ABOUT YOUR PROGRESS THIS SEASON?
I had a busy racing programme at the beginning of the year to familiarise myself with the OK-Junior category at the international level. I learned a lot with Birel ART Racing, although the results were not very convincing. With this experience, I then found my place in an English team, Forza Racing, for the World Championship and success immediately arrived.

HOW DID THIS WORLD COMPETITION UNFOLD FOR YOU?
The essential point was to get through Qualifying Practice in a good position. I could then achieve very good Qualifying Heat results, without incident and without penalty. The Final was decided in the first two laps. I was able to build a small lead and finally manage the return of my team-mate until the last lap, helped by my knowledge of the track.

WHAT IS YOUR FUTURE AS A DRIVER?
I really like karting and I would be willing to continue in the top category, OK, but we must consider all the options available to me to make the best choice. We are thinking of single-seaters, of course, but there are other possibilities in motorsport, like GT for example. Nothing definitive has been decided yet.

As the winner of the 2017 CIK-FIA Karting Academy Trophy, Belgian Xavier Handsaeme was invited to participate in the CIK-FIA World Junior Championship by OTK Kart Group, the official supplier of the Exprit chassis and Vortex engines of the Academy Trophy. This is how he took the start of the PF International Competition at the end of September at the wheel of a Kosmic / Vortex / Vega with the factory Kosmic Racing Department team. 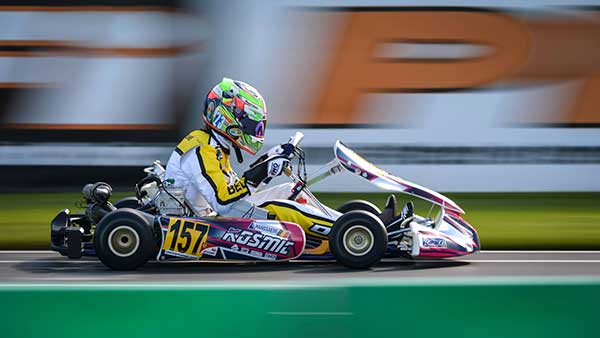 Unfortunately, Handsaeme’s first world experience did not meet his expectations. Starting from a very long way back after a difficult Qualifying Practice, he was not able to regain enough ground in the Qualifying Heats and was unable to qualify for the Final and reach his potential.

“I am very happy to have participated in the CIK-FIA World Junior Championship. Xavier said.

“I thank OTK Kart Group for allowing me to discover the Competition within a team as well-known as the Kosmic Racing Department and Olivier Maréchal. I am also very disappointed that it went so badly, but I know enough about the complexity of Kart racing to be able to overcome this feeling and move forward.

“Everything had started well as I was among the fastest in Friday’s Free Practice. Qualifying Practice went much less well. I did not have a good time in my session and the difference in performance between the three groups relegated me to 72nd place. From there, my chances of qualification were already very much compromised.

“The battle was very tough in the pack at the PF International circuit, but I had no choice but to attack as much as possible, with all the risks involved. I retired very early in the first Qualifying Heat and was penalised because of an incorrectly positioned front fairing at the finish.

“I wish I could have shown what I was able to do, but it really was not possible this time. However, I remain generally satisfied with the 2017 international season, thanks in particular to my victory in the CIK-FIA Karting Academy Trophy.”

Organized from 6th to 10th September in Germany at the Wackersdorf circuit, the CIK-FIA World KZ Championship brought together the most impressive field of the year in the advanced category of gearbox karts. The great return of the World Competition to Germany after 40 years of absence perfectly met the expectations of all.

The 2016 World KZ Champion, and the winner of the CIK-FIA European KZ Championship this year, the Italian Paolo De Conto won his second world title. 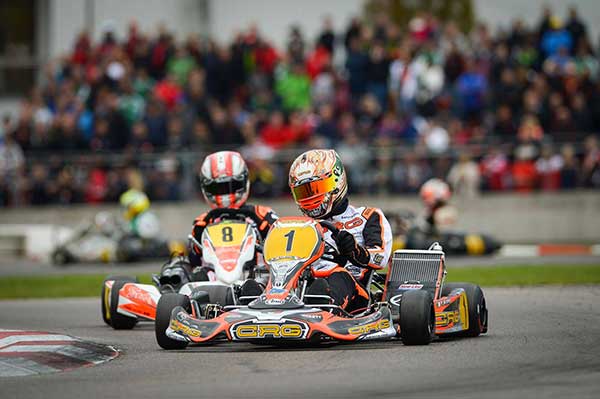 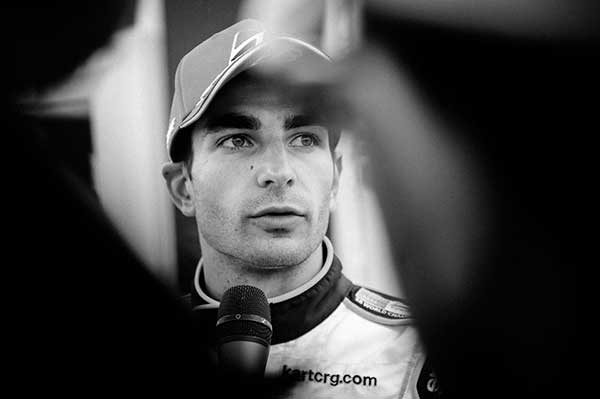 Iglesias and Hajek took the lead when the lights went out for the Final, but were neutralised after a collision. Abbasse took 1st place until the 7th of the 26 1190m laps. De Conto took advantage of a small error from the Frenchman to settle in at the controls and yet the outcome remained uncertain until the finish, as the two men were close in terms of performance.

The suspense continued until the finish when De Conto won by three tenths of a second in front of his brave opponent. Britain’s Benjamin Hanley (Croc Promotions / TM Racing / B’stone), now a driver in the FIA’s WEC LMP2 category, completed an achievement as he climbed onto the third step of the KZ podium after gaining 10 places. Jorrit Pex (CRG / TM Racing / B’stone) and Simo Puhakka (Kosmic / Vortex / B’stone) completed the top five.

Selected for the second time by the RACB to defend the colours of Belgium in the CIK-FIA Karting Academy Trophy, Xavier Handsaeme has accomplished his task perfectly in winning the 2017 edition. 3rd at Genk (BEL), winner at Le Mans (FRA) and 2nd at Alahärmä (FIN), the 14 year old Driver proved the extent of his talent on all terrain.

Both combative and thoughtful, Xavier undeniably possesses the qualities he needs to become a great Driver. After Maxime Potty’s victory in 2013, this is the second time that a Belgian has won the CIK-FIA Karting Academy Trophy. 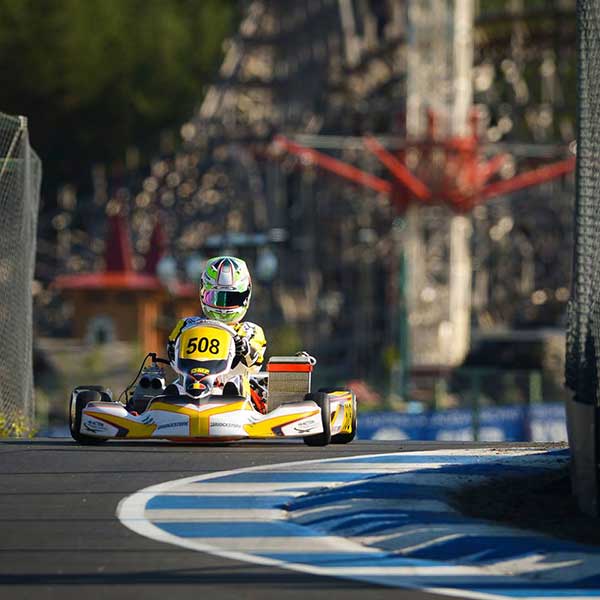 XAVIER, CAN YOU TALK ABOUT YOUR KARTING DEBUT?

I discovered Karting at one of the many indoor recreational tracks we have in Belgium. My father then agreed to support me to start racing. After a test in Honda Cadet four-stroke in 2012, then in Rotax Micro Max, I really started with Rotax Mini Max in the BNL series. I then continued in Junior Max and I qualified for the 2016 Rotax Max Challenge Grand Finals, the year I first competed in the CIK-FIA Karting Academy Trophy.

HOW DID YOUR TROPHY CONQUEST TAKE PLACE THIS YEAR?

The experience from 2016 was very useful to me. Even though this time I had the goal of winning, I immediately felt more comfortable. I knew how to approach the Races and how to go fast each time. I had to face several opponents, some of whom beat me, but none of whom was consistent enough over the whole Trophy to deprive me of the overall victory. I am very happy to have reached my goal and to have been rewarded with a participation in the CIK-FIA World Junior Championship.

WHERE ARE YOUR PLANS FOR THE FUTURE OF YOUR CAREER?

It is still too early to know exactly what I will do in 2018. I am of course tempted by cars. However, I would like to continue in Karting and try to win a World Championship. I have already participated in three races in OK-Junior this year, the OK category attracts me for the future.

Every year, the FIA Women in Motor Sport Commission supports the participation of a young female in this Trophy. In 2017, the 12-year-old Colombian Valeria Vargas Garcia was chosen because of her motivation and the promising results of her career in karting which had started six years ago. Very comfortable to communicate and always able to be positive, Valeria summarises the results of her season. 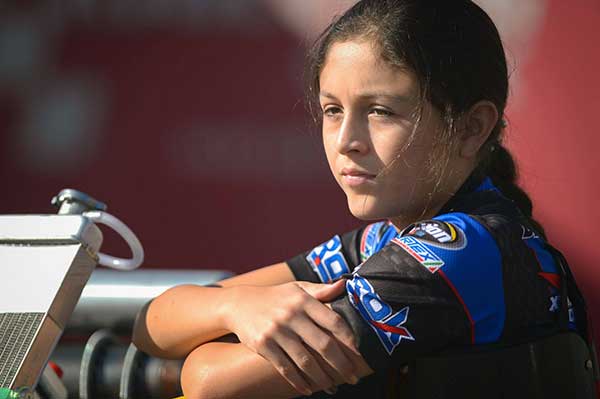 “It has been a great opportunity for me to be chosen by the Women in Motor Sport Commission and to represent my country, Colombia. I am aware of how lucky I was to compete in the 2017 CIK-FIA Karting Academy Trophy. The Competition has always been very well-organised and the karts available to us were excellent. The combination of the efficiency of the Exprit chassis, the power of the Vortex DDJ engine and the grip of the Bridgestone tyre allowed me to discover another world.

“The Competition was very tough at the three circuits of the Trophy. I had to try to be fast to get back into the race, without crashing and without being penalised, especially for the front fairing, which was not always the case. I achieved my best performance in Qualifying Practice at Genk (BEL) with 23rd out of the 49 Drivers. I managed two beautiful races out of the three, but I moved my front fairing each time. I was out of the running during the Le Mans Qualifying (FRA), but I gained ground in two of the three Heats. I also came back at Alahärmä (FIN) before having to give up in the third Heat.

“I did not think the standard was too high. Everything is very different from what I have known in Colombia: circuits, equipment and also competitors. In any case, this season in Academy was a very rewarding experience for me and I learned a lot during this first year in Europe. I hope I can use all of this in the near future. I would very much like, with the support of my family, to be able to compete for the entire European Junior Championship next year, because I am convinced that this is where you need to be to become a good Driver.”