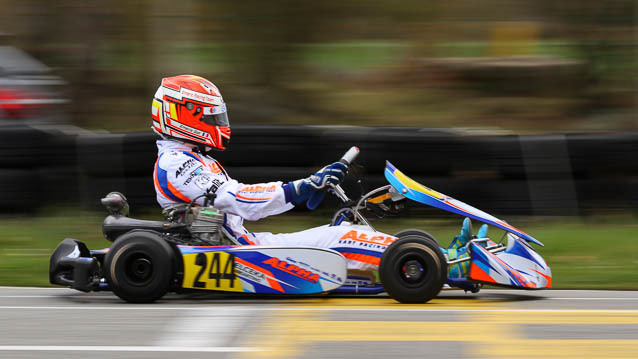 Alpha Karting’s sporting, technical and commercial strategy has immediately begun to bear fruit at the start of the season in 2018. The new CIK homologated chassis, as well as the FFSA homologated chassis in Minime and Cadet, enabled their drivers and their teams to display a very high level of performance. The podiums are there for the French manufacturer and Alpha Karting has the ambition to continue its momentum alongside its partners.

Alpha Karting started 2018 with an increased presence in new markets around the world. In addition to France, distributors located in countries such as the United States, Germany, Spain, Portugal, Belgium and Switzerland were pleased with the efficiency and quality of production of the new range, developed in collaboration with the worldwide benchmark Sodikart factory.

Victories at Salbris, Soucy, Le Mans…
“We have done a lot of work to expand our network, which includes professionals recognised in the profession,” confirmed sales manager Hugo Montesano. “We knew their expectations, which is why we left nothing to chance at all levels: technical, design, responsiveness and services. Since the beginning of the season, I have already had the opportunity to visit several races and the effects of our new dynamics are clearly felt in the field.”

D-Kart driver Bastien Leblais opened the hostilities in Minime, with a victory at Salbris at the Stars of Karting Open Kart, 2nd place at Brignoles in the Jules Bianchi Trophy (IAME Séries France) and another success at Le Mans with pole position on the first day of the Brittany-Pays de la Loire League Championship. Still at Le Mans, but in X30 Gentleman, D-Kart took a double win with Thierry Abiven and Jean-Joseph Lattuada!

The Alpha Karting chassis of the Braun Racing team have also been showcased on several circuits, such as Corentin Guth’s victory at the Sens Trophy at Soucy, and his competitiveness was also displayed at the Oscar Petit Trophy in Varennes sur Allier.

2018 on the right track
Combining the leagues of Languedoc-Roussillon, Midi-Pyrenees and Nouvelle-Aquitaine, the Southern Championship began with several drivers from the Suau Racing Kart team to the forefront. Emeric Got in X30 Senior and Jérémy Lopes in KZ2 took 1st place in the heats, while Tom Vidal achieved a solid performance in 5th position in Senior.

On the other side of the Alps, the Swiss team LKM is optimistic after the first runnings. More than 40 years after its creation, victory is more than ever part of the DNA of the French brand.

The news from Alpha Karting also concerns the range of rental chassis and the increase in sales in France and abroad in this highly competitive sector. Internationally, the online sales site www.akparts.fr is attracting more and more customers with its versions in French, English and Spanish. Spare parts, equipment, tools, accessories, equipment… there are hundreds of references available and orders are rewarded with loyalty points.